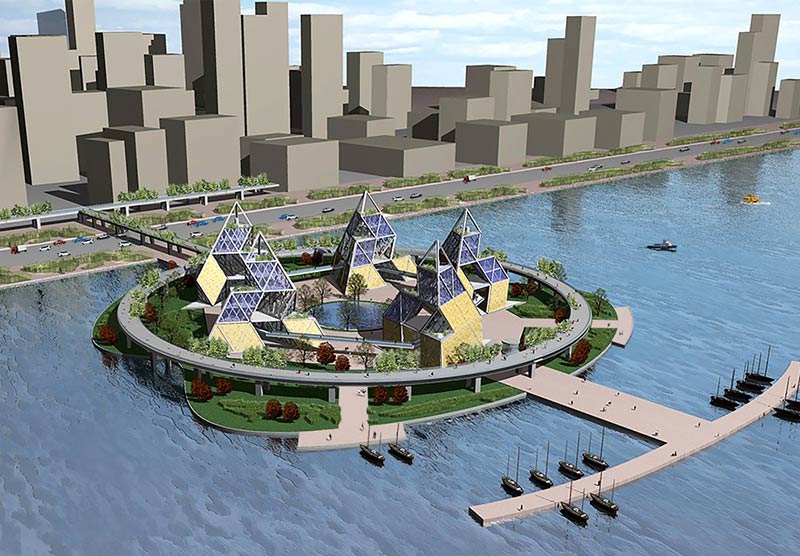 New York architect and longtime visionary Eytan Kaufman has drawn up a conceptual plan to connect the final leg of the High Line to a new island/pier in the Hudson River.

Currently, the High Line gets tantalizingly close to the waterfront in its final spur around Hudson Yards, but then swerves inland towards an anticlimactic end at the Jacob Javits Center. Kaufman’s scheme called Hub on the Hudson would build a pedestrian bridge over the West Side Highway, shuttling people from the elevated park to a sprawling, circular-shaped cultural and recreational center. It’s quite similar to Barry Diller’s proposed Pier 55 floating park, which is planned for a Hudson River site slightly farther south in the Meatpacking District.

Extending more than 700 feet into the river, and spanning nearly nine acres in size, the pie-in-the-Hudson plan would build five interconnected pyramid-shaped buildings, comprised of an art center, restaurants, and publicly accessible open spaces. A circular elevated promenade would encircle the island, which Kaufman says would contrast to the linear procession of the High Line. At ground level there will be a central reflecting pool with a promenade leading out to a marina. The pentagonal, pyramidal and circular themes expressed in the plan make its spiritual intentions quite clear: To sail the High Line’s tourists back home. […]

Tips on How To Refresh Your Bedroom On A Budget

Where the Real Skyscrapers Are

March 5, 2015
0
Name the tallest structures in the world. Maybe flashy skyscrapers in China or the Gulf States come to mind. Or maybe you’re thinking of...