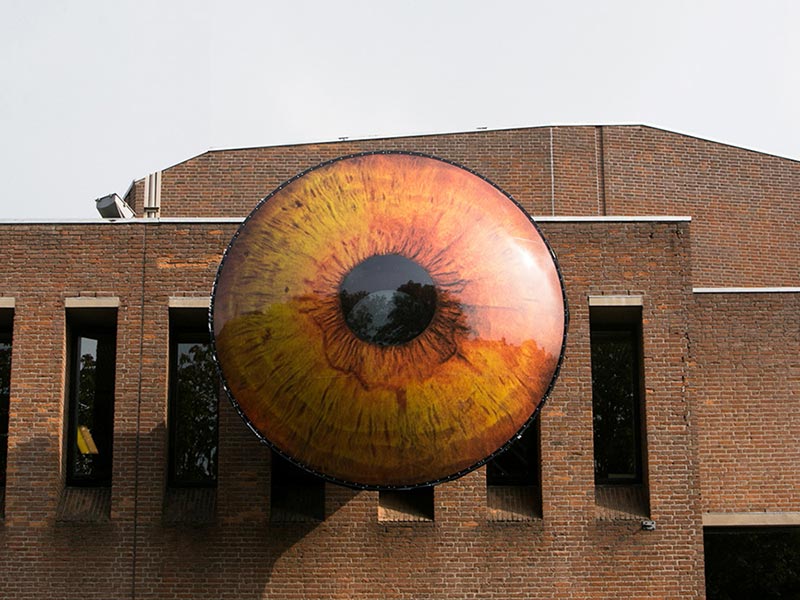 When you’re in a city, you become highly visible and totally anonymous at the same time. A street photographer could capture your likeness, put it on Instagram, and get hundreds of thousands of likes. In that same moment when your picture gets taken, you could also be sandwiched between strangers on the subway, who neither notice you nor remember you later.

Lucas de Man thinks it shouldn’t be this way. “The most important reason people come to a city to be seen,” says the Belgian artist who is one-half of the New Heroes design duo. “What about if the city gets eyes? Not one eye because that’s Big Brother, but eyes so you can be seen.” To give people in cities a way to “be seen,” de Man and his New Heroes partner Pascal Leboucq installed five giant eyeballs on the sides of buildings in the town of ‘s-Hertogenbosch in The Netherlands. With a reservation, visitors can go sit inside one of the eyes for 20 minutes, and look out over the city below. Halfway through their sitting, an animation (powered by the host of each eye, through a computer) of a lonesome man walking through the city gets projected against the inside of the pupil. Each eye is affixed to five different sites: the corporate SAP software building, a hospital, a theater, an old factory, and an old water mill. […]

April 25, 2016
0
With a budget of just $2,000, students from the Frank Lloyd Wright School of Architecture built a number of shelters on the school's Scottsdale, Arizona, campus