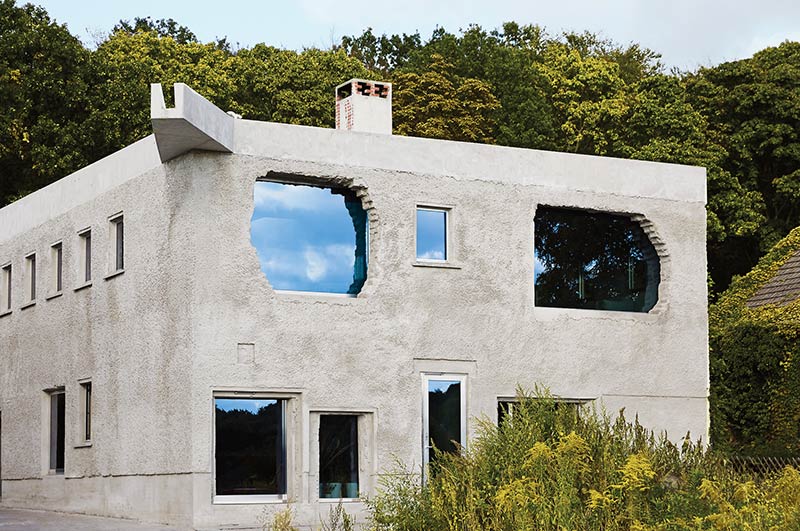 In the midst of the pretty little town of Potsdam, Arno Brandlhuber’s bunkerlike home can’t help but stand out.

Set in a glittering strand of connected lakes, Potsdam, just 15 minutes southwest of Berlin, can appear as a fun park of historic buildings: There is Frederick the Great’s Sanssouci palace, a small Rococo residence whose vast green is dotted with ornate temples; a series of 19th-century dacha-like wooden houses with elaborately carved facades built for the Russian singers of the First Prussian Regiment of the Guards; and various neo-Classical churches and buildings designed in the 1820s and 1830s by the architect Karl Friedrich Schinkel. After the Wall came down in 1989, wealthy Germans bought and renovated the faded Art Deco mansions that line Potsdam’s lakes, making the city and its architecture monuments to Germany’s stately Prussian past, a grand foil to Berlin’s postmodern urbanism.

Which is why encountering the architect Arno Brandlhuber’s bunkerlike Antivilla, which looms over the row of modest houses along Krampnitz Lake outside Potsdam’s center, can feel not just shocking, but assaultive. Here, in the midst of uncomplicated prettiness, stands the 5,500-square-foot rough-complected gray concrete cube, its presence both a rebuke to the area’s bourgeois pretensions as well as a reminder of its recent totalitarian history.

It’s also the assertion of the Berlin-based Brandlhuber’s own aesthetic — context be damned. The 51-year-old is known in the German architecture world for his affection for the ugly, the discarded and the minimalist. (‘‘Bruta-ful,’’ he once jokingly described a recent project, the conversion of a midcentury Brutalist church into an art gallery.) He approaches his projects not as a problem solver, but as a conceptual sculptor. […]

Is Newark the Next Brooklyn?