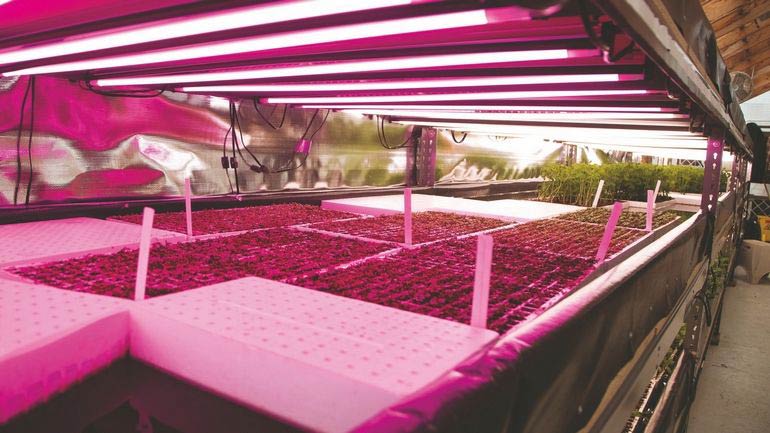 Here’s one way to grow food in an urban environment: Raise a school of tilapia in a tank. Filter out the nitrogen-rich waste, and let naturally occurring bacteria transform it from ammonia into nitrate. Run that naturally derived fertilizer beneath the roots of greens, herbs and peppers. Let the veggies flourish beneath LED lights. Harvest the vegetables. Later, harvest the fish. Cook and serve.

Known as aquaponics, this complicated but efficient ecosystem is the latest attempt at making agriculture commercially viable in New York City—even though it has a spotty history, a not-quite-proven track record and plenty of skeptics.

“We do aquaponics for the quality of produce it yields,” said Jason Green, CEO and co-founder of Edenworks, an emerging commercial aquaponics company in East Williamsburg, Brooklyn, that recently secured a commitment to supply baby greens and microgreens to Whole Foods Market stores in New York City later this year. “Our innovation is that we can do aquaponics cost-effectively, scalably and repeatedly.”

Though the premise of mimicking a natural system in a closed environment is ancient, Green says that new technologies including proprietary software, a complex plumbing system and cost-efficient LED lighting, plus a soaring demand for local food, will make fish-fed farms viable on a large scale, even in inner cities. A 2010 report from the New York City Council cited $600 million in unmet demand for regionally grown produce.

“Consumers are very interested in knowing the provenance of their food, and companies are responding to that by setting up systems to produce food in cities,” explained Nevin Cohen, an associate professor of urban food policy at the CUNY School of Public Health.

Brian Mansour, who runs a 20-year-old aquaponics greenhouse at Cabbage Hill Farm in Mount Kisco, in Westchester County, says the economics of farming in the city will eventually be made to work. “It’s just a matter of time before somebody with enough money and the right crew will get together the right model that will work,” he said. […]