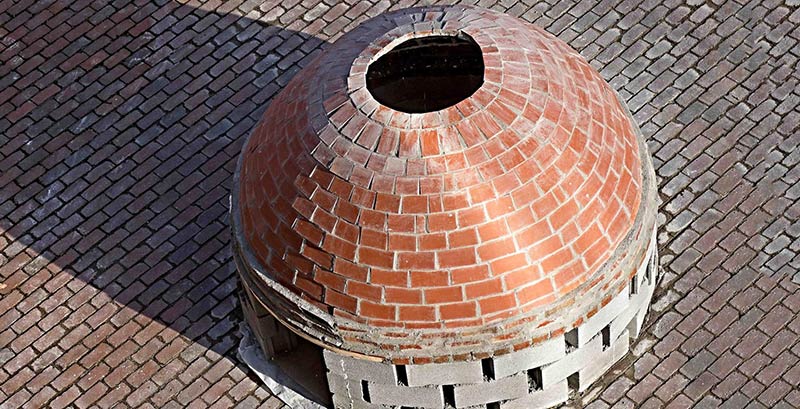 Architecture and architectural history students studied historical building techniques to build two scale models of the University’s centerpiece – one as it was before the 1895 fire, and another after it was reconstructed in a new style.

Thomas Jefferson’s meeting with artist Maria Cosway in France proved fateful not only for the man himself, but for the university he went on to found.

Jefferson, a widower serving as America’s ambassador to France, spent a day wandering Paris with Cosway in 1786, sparking a friendship and, some speculate, a love affair. More importantly for the University of Virginia, the day furnished Jefferson’s inspiration for its signature Rotunda.

On that fateful day, Cosway showed Jefferson the Halle aux blés, an indoor marketplace capped by a wooden dome in the style of 16th-century French architect Philibert Delorme who used wooden ribs of various thicknesses to create beautiful and sturdy domes. Captivated by the style, Jefferson bought Delorme’s handbook and set about bringing the Frenchman’s technique home. He installed America’s first Delorme dome at Monticello and repeated the technique when designing UVA’s Rotunda.

This semester, Benjamin Hays, a senior engineer with the Office of the University Building Official and a lecturer in the School of Architecture, led students in recreating the Rotunda’s original dome, which was destroyed by the 1895 fire. Guided by Hays and architect Douglas Harnsberger, students built a scale model of the Delorme dome with 472 individually cut wooden pieces, using Jefferson’s original framing sketch and handwritten material specifications to determine many of the model’s parameters.

They also built a second model of the Rotunda dome, as it was redesigned after the fire by Spanish-American architect Rafael Guastavino, who used a 14th-century vaulting technique in the reconstructed Rotunda. Hays studied Guastavino’s other UVA building, Old Cabell Hall, as a master’s student at UVA, investigating a 120-year-old vault collapse. In addition to his own expertise, Hays brought in Benjamin Ibarra Sevilla, as assistant professor of architecture at the University of Texas and an expert on Guastavino’s technique, to lead students in modeling Guastavino’s Rotunda dome. Hays believes it was the first time anyone attempted to reconstruct either version of the Rotunda’s dome. […]

Look at the jaw-dropping emptiness of America

February 4, 2016
0
There was a fun new entry in the genre at Reddit last week, with a map showing the enormous chunk of land where only 1 percent of the population lives.