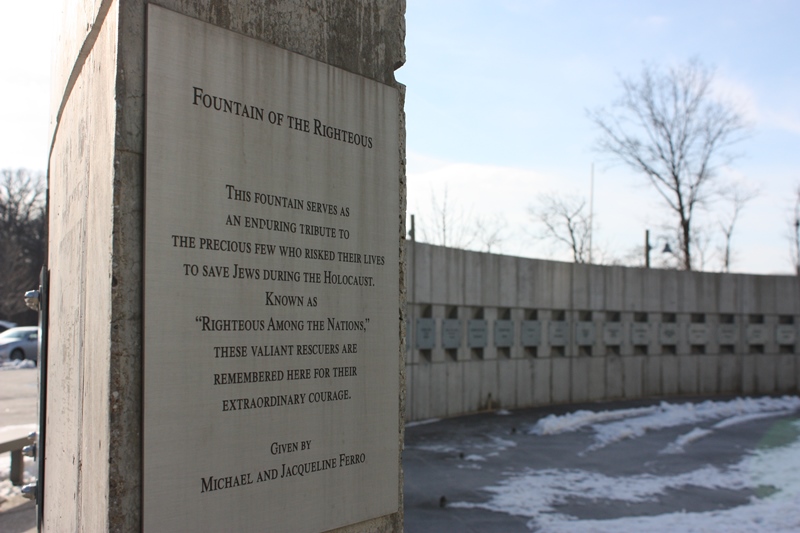 Originally opened as a small storefront in Skokie in 1984, the Illinois Holocaust Museum initially came out of a protest to a neo-Nazi rally in the late 1970s. The rally never happened and instead, in 1981, the Holocaust Memorial Foundation of Illinois was formed, largely via the efforts of local survivors.

Though the museum had been testing an architectural tour since June, interest in the tour jumped after the museum’s participation in, the Chicago Architecture Biennial, according to Mary Gold, the Illinois Holocaust Museum’s vice president of marketing. (The CAB opened on Oct. 3 and closed earlier this week.)

When weather permits, the tour starts outside, with visitors standing before the Ferro Fountain of the Righteous, a tribute to many of the non-Jews who risked their lives to protect Jews during the Holocaust. Guides also point out the building’s exterior, with its east-facing white pavilion symbolizing the Jews’ anticipation of the Messiah and the darker pavilion facing southeast towards Jerusalem.

After that, it’s back inside for the rest of the tour which, since it doesn’t follow the museum’s typical path, has guests constantly moving back and forth between dark and light. […]

April 29, 2016
0
The City of Sydney has revealed new visions for an open-air plaza at Green Square designed by Stewart Hollenstein and Colin Stewart Architects