In March 2009 schneider+schumacher won a competition run by the Förderverein Autobahnkirche Siegerland e.V, which was founded for the specific purpose of establishing an Autobahn church.

The initiative for this project came from Hanneliese and Hartmut Hering, after having visited an Autobahn church in south Germany. Just one glance at the map revealed that a place like this was lacking in the entire Siegerland area, and consequently also along the very busy A 45.

The architects took on the project with the same empathy. Under the guidance of Michael Schumacher, it was designed in parallel with schneider+schumacher’s extension to the Städel Museum. The Christian-ecumenical church was realised thanks to numerous donations.

Building work began in March 2011, starting with the archaic sculptural concrete foundation slab, which forms the base for the timber-framed church above. The consecration and opening of this building, Germany’s 40th Autobahn church, took place on 26 May 2013. 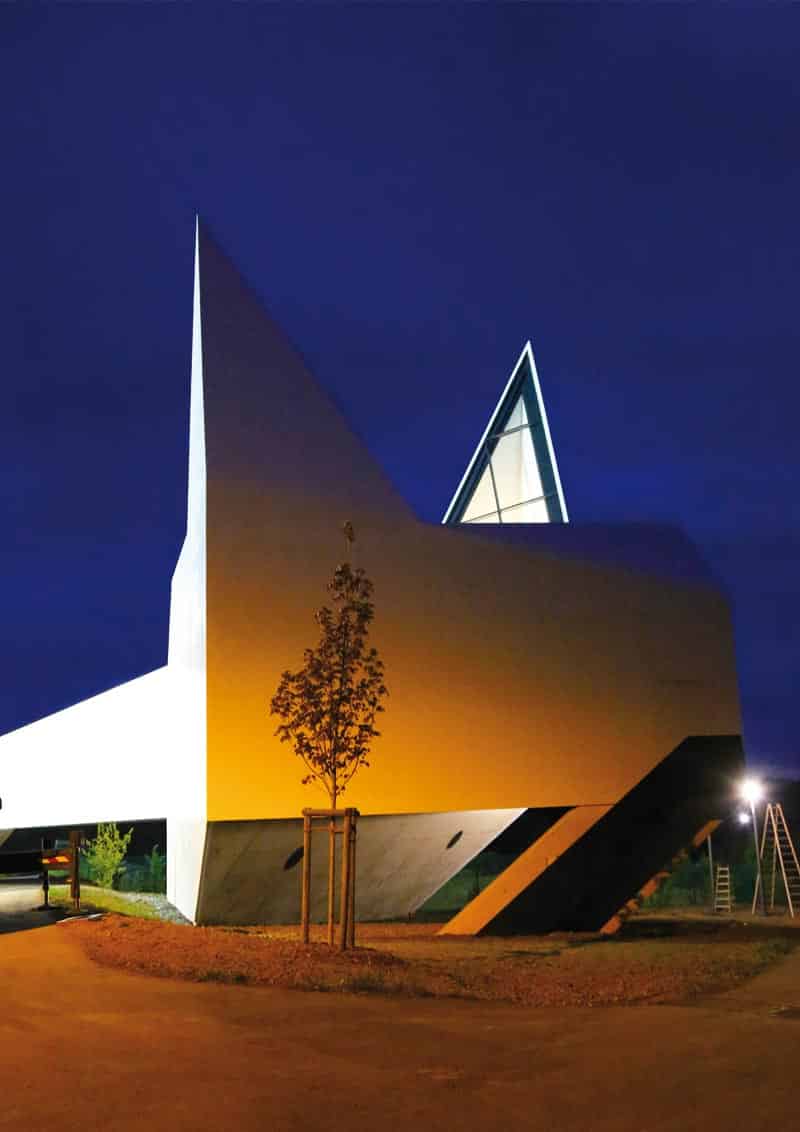 Autobahn service areas are places with an unmistakably direct message. Huge signs point to what goes on here: filling-up, eating, sleeping and maybe also, for a bit of distraction, a visit to a gaming mall. They are little cities, but without the subtle layers – no spaces for quiet contemplation or prayer, no beautiful spaces.

The small Autobahn church offers an opportunity to fulfil these fundamental needs, and provides these in a place where they are arguably most lacking. For a building to make an impact in such surroundings, it needs to talk the same unmistakably direct language (at least on the exterior). Whether approached from afar from the Dortmund direction, or from the motorway service area, the church represents a built version of the motorway church signage. Even though its exterior form is abstract, it still signals in an immediate and direct way: ‘I am a church!’ 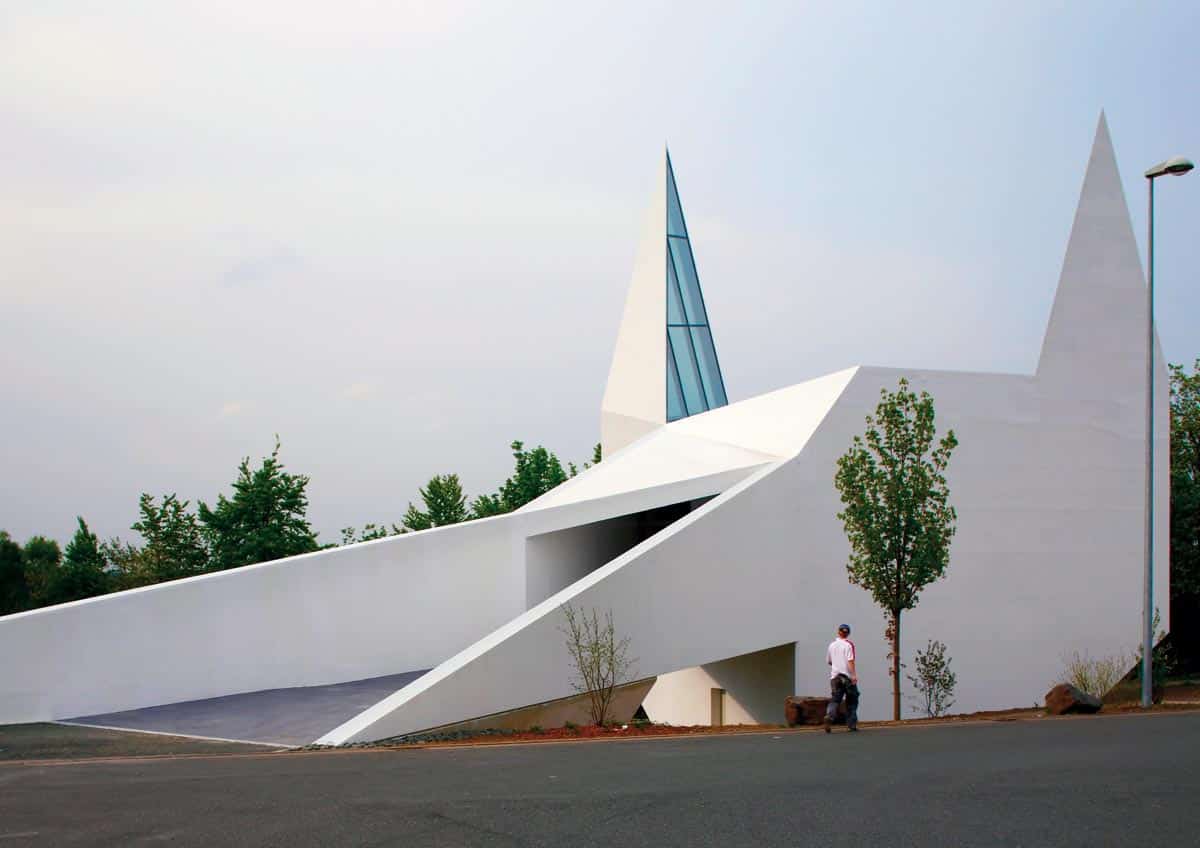 The three-dimensional translation of the church pictogram – a stylised white silhouette of a traditional village church – can be seen from both the motorway and the service station. From close-up the church appears to grow out of the hillside and visitors enter it via a raised walkway leading to a covered entrance.

Once inside, contrary to the expectations raised by the exterior of the building, the design of the interior comes as a surprise. The inner dome opens up to the naturally lit area around the altar, illuminated only from above through the two church spires. The filigree wooden vaulting also displays a finely worked cross-ribbed structure. 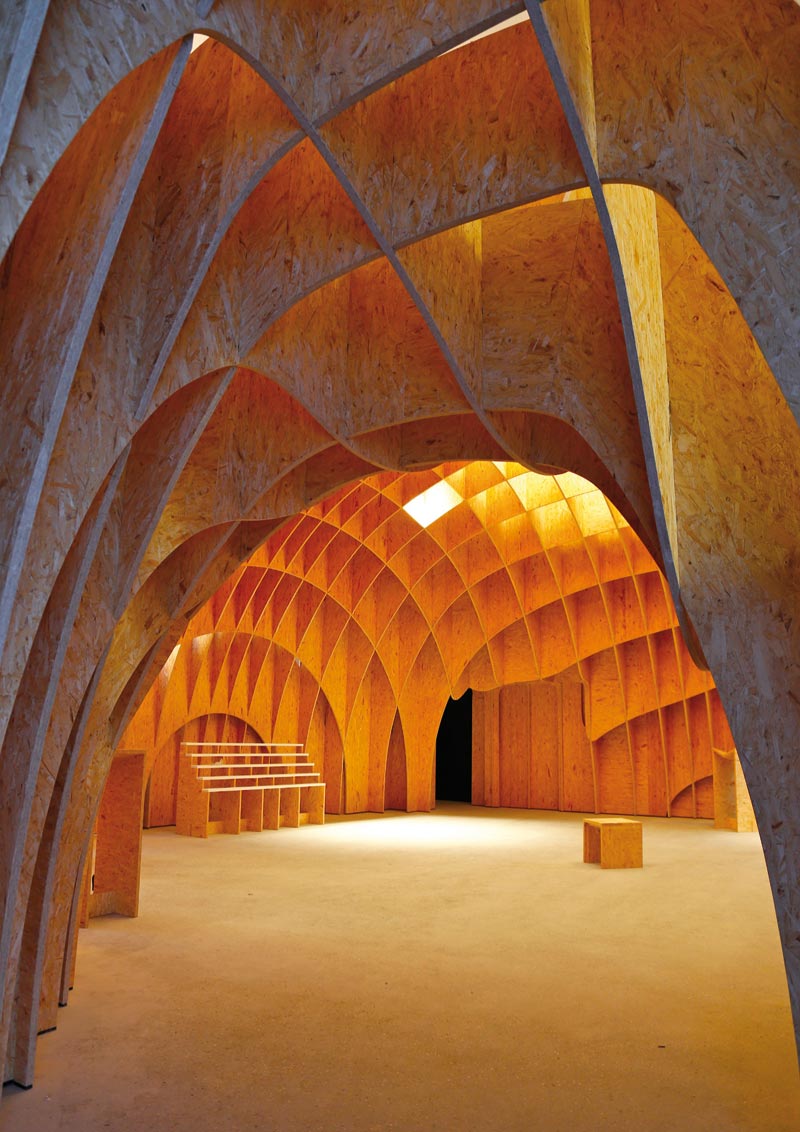 The plan of the new Autobahn church consists of a square nave with two corner towers and an access bridge from the southwest. All the outer walls are formed in timber-framed construction, with laminated timber elements used for the roof structure and the towers.

The majority of the building components were constructed off site, allowing an optimised and shortened on-site assembly period, since the pre-constructed building elements had already been assembled off-site using a special connection system. The timber roof and wall elements are cavity-insulated. The inner and outer faces of the timber members are clad with panels of OSB. The walls of the bridge are halftimbered and the access bridge floor construction is clad on both sides with double faced OSB. 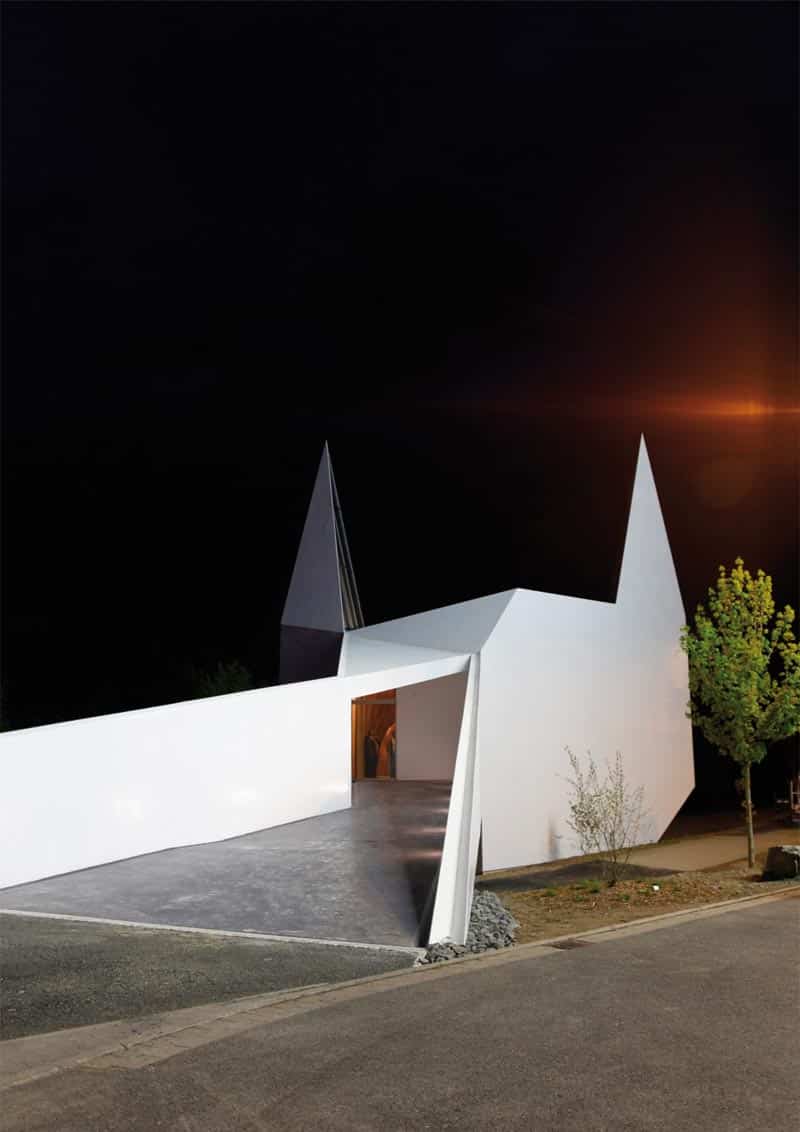 The entire façade of the church and the connecting bridge was sprayed with white polyurethane damp-proofing material. This protects the outer surfaces of the wood from both the ingress of damp and wear and tear, and gives the church a homogenous appearance.

Once inside the vaulted entrance, the inner dome opens up to the altar. This area is naturally illuminated only via the church tower above. Within the predominantly square ground plan, semi-circular areas created by the inner dome at the edges allow the areas that lie outside the visitor’s line of vision to be used as a sacristy and as supplementary spaces e.g. for chair storage. 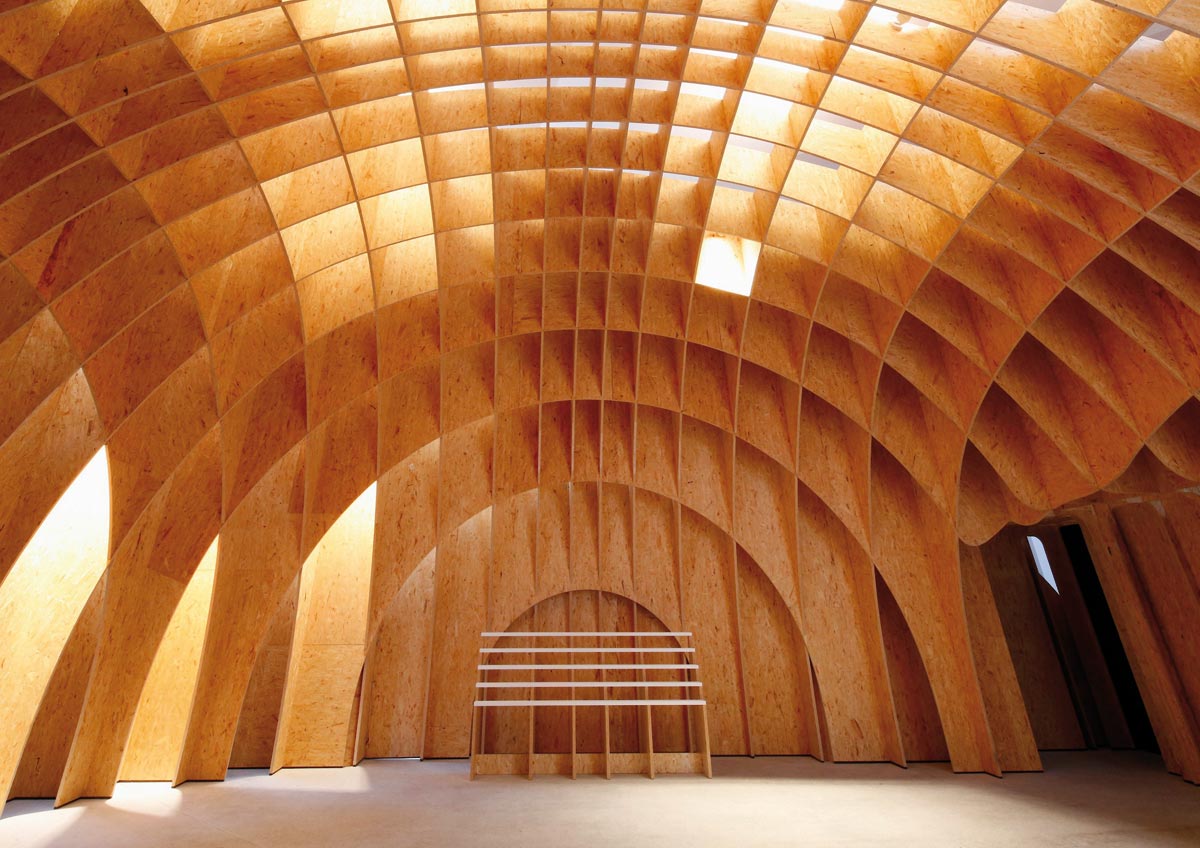 Interior furnishings
All relevant decisions regarding the interior furnishings of the church have been developed in close collaboration with the client. They consist of the same material as the timber inner dome. Arranged in this manner, seating, lectern, kneelers and the candlestick form a unit. Solemnly in the presbytery, podium, altar and the backlit cross are painted in a pure white to reflect sunlight and therewith seem dematerialized. 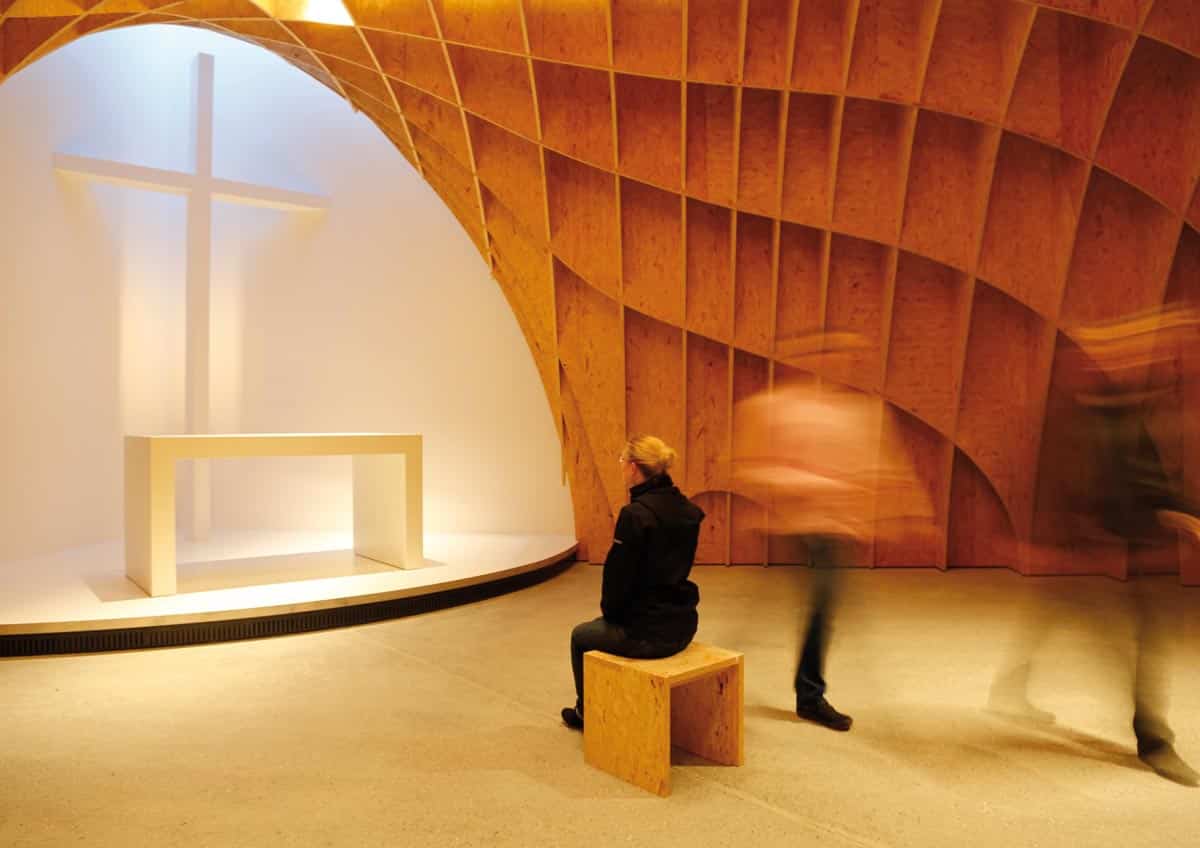 The inner dome consists of 66 vertical and horizontal semi-circular timber structural ribs, made up of 650 individual parts. The timber ribs are slotted into each other and secured in the slits cut into the panels, so the structure has not only rigidity but is also self-supporting.

The floor needs anchoring with steel angles only at intermittent intervals. The CAD program was developed beyond its usual planning function into a 3D-printer software program. It was then used to transform the dimension data first calculated for the inner dome to provide a cutting pattern for all the dome parts. Taking account of standard dimensions of OSB boards, the 650 parts of the structural ribs were positioned so as to minimise wastage. 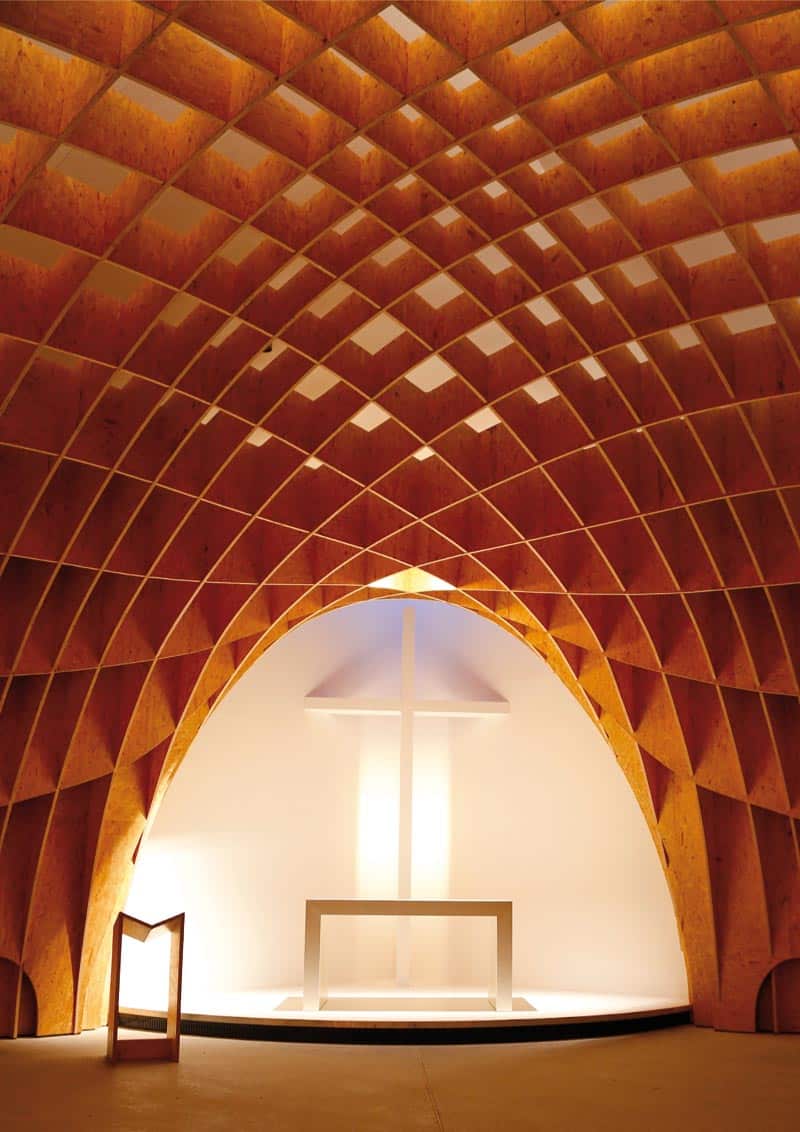 Optimizing the lighting
At the start of the project a number of different lighting tests were carried out on a (1:25) timber model, as well as in the computer-controlled 3D model.

Architects are designing buildings for the age of mass shootings