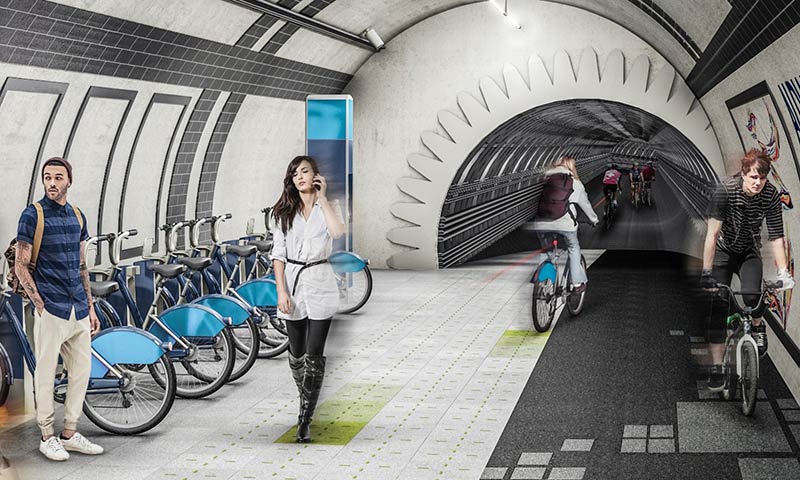 Could the answer to London’s congestion be a network of subterranean cycleways? A new project from design firm Gensler suggests that maybe – just maybe – it might. Dubbed the London Underline, the project would turn London’s abandoned tube tunnels into living streets beneath the city. While there’s still a speculative, utopian look to the proposals – renderings showing the tunnels packed with youthful Londoners resemble an updated version of Logan’s Run – the London Underline is being taken seriously enough in some quarters. Earlier this week, it won the Best Conceptual Project gong at the London Planning awards.

The project would use dual tunnels in the Underground’s defunct stretches to create parallel pedestrian paths and cycle ways, also lined with cafes and click-and-collect points for online shopping. To help make the tunnels more financially viable, each path could be surfaced with kinetic paving, which uses footfall and the friction created by bike tyres to generate electricity. The tunnels would not need to be connected directly to ground level. They would be accessed via tube stations, while Boris bikes for hire would lurk at the mouth of each stretch.

The first response to all this is probably surprise. Not many people were aware that London had a vast network of unused tunnels slithering beneath its surface. The truth is that it doesn’t really – but there are some interesting subterranean stretches here and there that are currently lying dark and sullen. ….

COBE: Monuments of the Future

September 3, 2015
0
VDNKh, a modernist exhibition centre which opened in 1939, heading to the top of the Moscow pavilion...