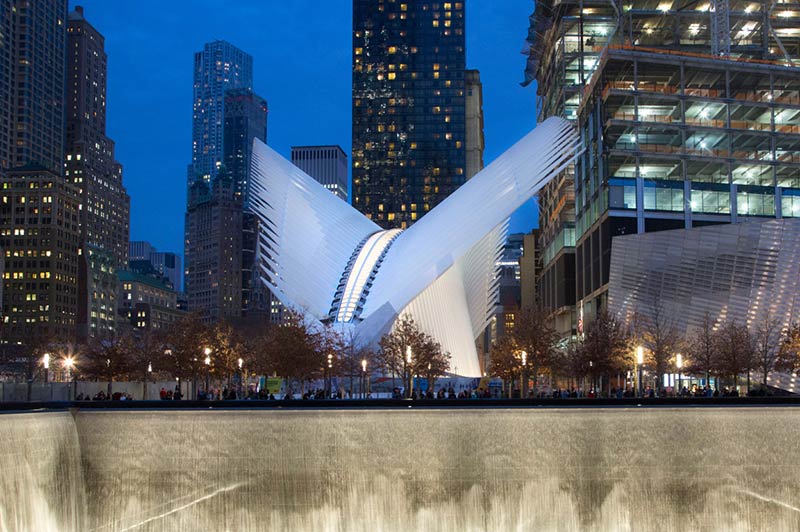 In early 2004, the architect Santiago Calatrava stood beneath the palm trees of the World Financial Center’s Winter Garden and drew a quick sketch of a child releasing a dove. That was the showman’s prelude to unveiling his design for the World Trade Center Transportation Hub, a great white bird that charmed a roomful of skeptics.

Finally, after all the earthbound squabbles and depressing compromises, here was an expression of upwelling joy. A lot has changed since then: Towers have risen, trauma has been enshrined in a cryptlike museum, and the scar tissue between the site and the city has slowly begun to heal. Calatrava’s design, too, has evolved: The glass cocoon, delicately veined with steel, thickened its hide after the attacks on railway targets in London and Madrid.

The cost, as we’ve all heard, leapt from the huge to the inconceivable, topping out just under $4 billion. If those of us who felt the exhilaration of that day understood the financial implications better than the Port Authority had, would we have swallowed hard and rained brimstone down on the design? Maybe, but hardly anyone did. Like most critics, I waxed rapturous: Calatrava, I wrote, had conceived “an optimistic emblem of flight as an answer to airborne disaster.”

After a dozen years, many doubts, and a walk through the nearly complete station this past week, I feel exactly the same. It seems miraculous that Calatrava’s daydream should now finally exist, altered yet recognizable. Its frame is a little less lithe, its skin a little less smooth, its concept more mature. What remains is an extravagantly idealistic creation unlike any in New York. It challenges the city’s public architecture to rise above habitual cut corners and rectilinear repetition. The cost of beauty is often high. […]

The Tower of Trouble