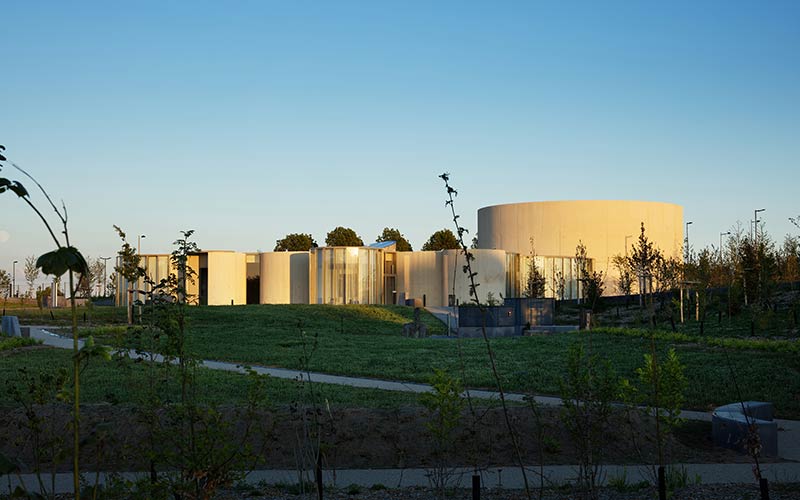 From the architect:After having completed the Rennes crematorium, Plan 01 has continued to discuss a project which involves the architect in the most sensitive and rich areas of the architectural process.

These are areas which help convey the ethical meaning of discipline.

Few projects involve so much emotion and express such human and cultural richness. However there are also as many obstacles and risks which, when overcome, allow life to appear in all its power.

The success of this approach lies in its ability to create the environment of a dignified and serene experience during one of the most dreaded moments of our existence – the loss of a loved one – and, what is more, during one of the most tangible and extreme moments, when the body of the deceased person is cremated.

In France, the exponential growth in the number of cremations, due to changes in customs and traditions, questions our cultural allusions on what a crematorium should be like. 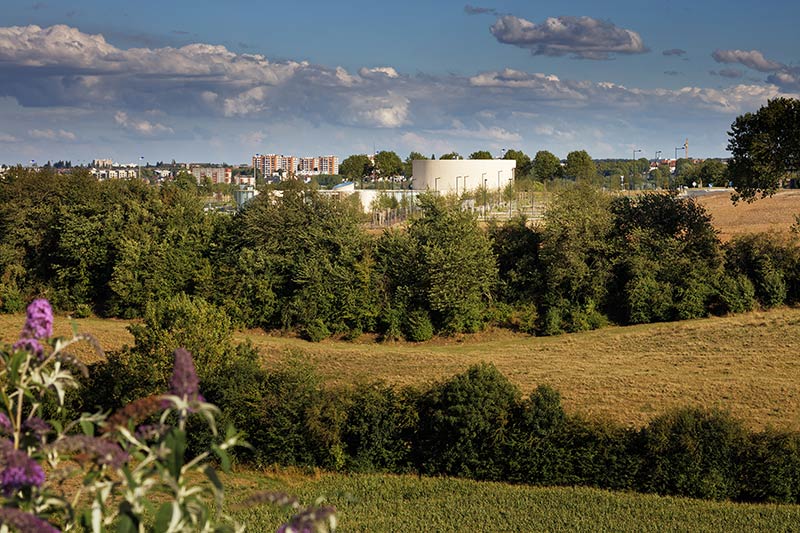 We want a result which works in symbiosis with the site, and which creates a spatial system which takes account of the cultural diversity of human reactions which can arise during such an event.
Faced with the emotional intensity of a cremation ceremony, we offer an architectural creation which proposes a space that can be interpreted and adopted differently by each person.

This results in a project which is based on the theme of the circle as a symbol – universal and timeless – intended to represent secular spirituality in the collective imagination. 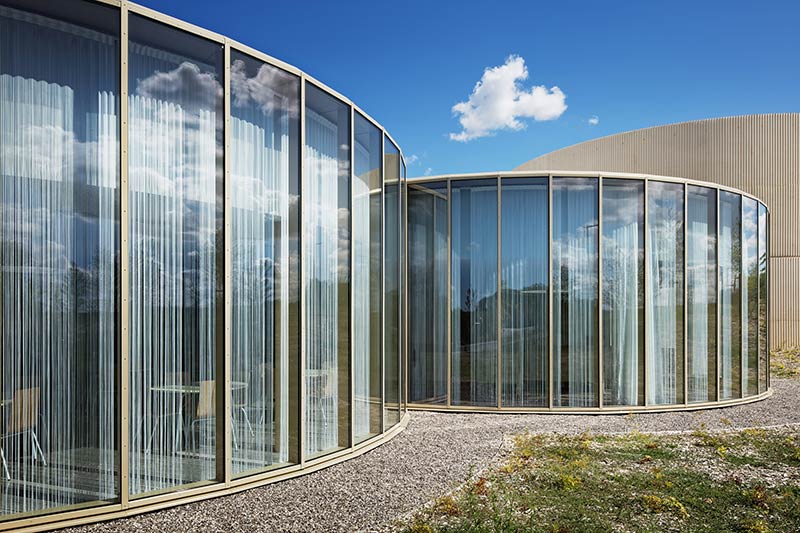 Our architecture is based on this strong image of the circle, which is representative of clearly identifiable themes, such as:

The central position of the deceased person.
The circle as a universal and timeless symbol.
Secular spirituality.
Removal of references to daily life.
The fluidity and diversity of the journey.
Blending into the landscape.
Hiding the technical elements, particularly the chimney. 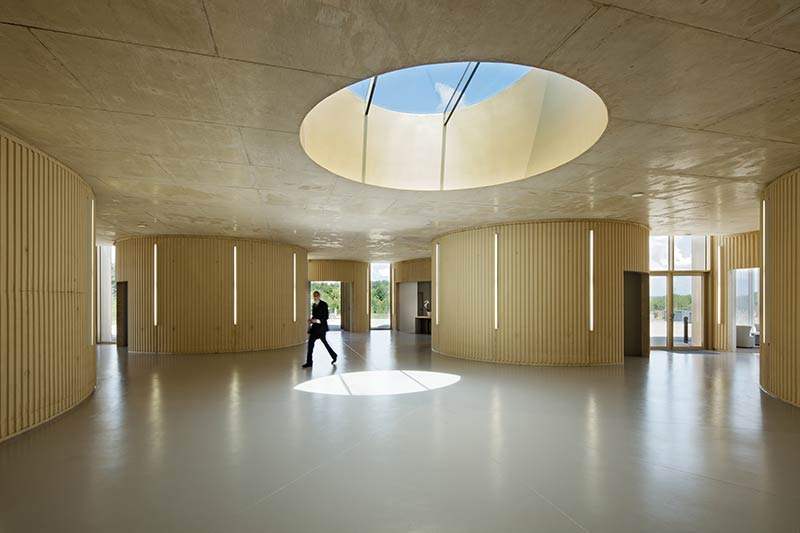 Our specific interpretation of the site has given rise to a hollow space which resonates with its environment, an arrangement which allows great flexibility due to its combinations of near and far and its range of scales and textures. A fluid and calm dynamic, a flexible definition of a sensitive and considerate space. A serene and light response, interdependence between the site and the project, which is demonstrated through the harmonious relationship between vegetation and the building. A landscape building which accompanies a special, painful but inescapable moment during our human existence, which requires a dignified and soothing setting. 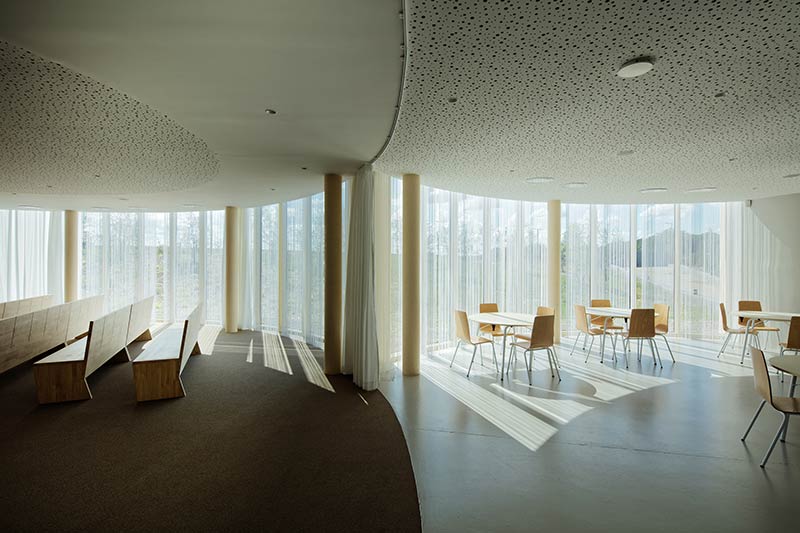 Our consideration of the topic lead to two concepts:
Landscaping the architecture to remove references to the “world of right angles” from daily life.
Architecting the landscape to create a comprehensive welcoming experience, to “show the way” and guide with fluidity.

To do this we have made the most of the site’s topology to distinguish two spaces. In the upper part, in the foreground, directed towards the town, the site and its access are clearly identified from the roundabout through the cylindrical and bright appearance of the building which receives the hearse. This access is handled with the dignity required to respect the deceased person, whilst preserving the intimacy of handling the body. 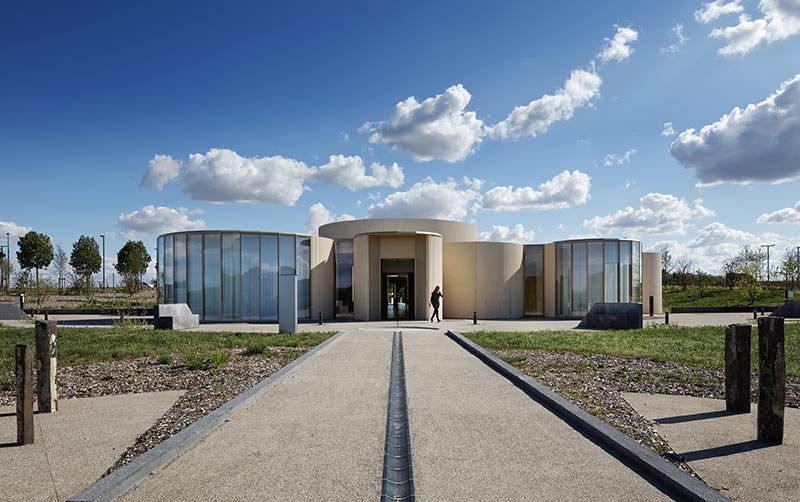 On either side, there are two symmetrical car parks which make significant use of the vegetation. This approach helps distinguish paths, vehicles/pedestrians, the deceased person/attendees, all whilst providing complete independence and intimacy for the two ceremony spaces as well as access to the cremation site.

Consideration of the best place for a car park, within a project where, in some way, we want to get away from the triviality of day-to-day life propagated by the automotive world, led us to develop a path which moves from the social to the intimate. 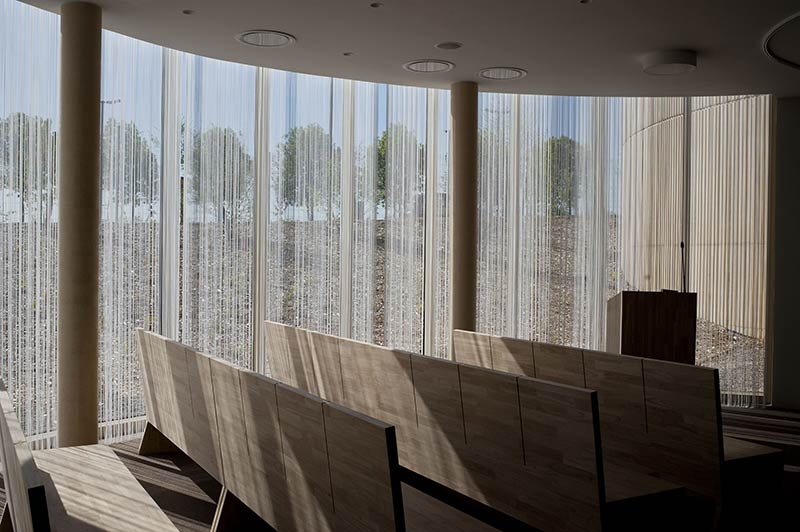 Thus, the first landscaped boundary, the first enclosure constitutes the first threshold in the form of a forest border. Just beyond this border, there are two access points to the site. These are thresholds from which you leave the space of daily life to enter into the ceremony space. The difference in level and the orientation towards “the countryside” isolates the funeral spaces from daily life. In this space, which is more vegetation than building, we avoid the trap of static and closed spaces; you move from urban noise to interior silence: the lake, the wind in the trees, quiet or crisp ground. It’s a space where you feel close to the elements: rain becomes a painting, wind becomes music, sun becomes light, earth becomes shelter for the ceremony rooms.

From this square, you enter the building or you access the different areas of the funeral site, using different paths which are more or less direct, based on level of mobility or desire. Vegetation screens, areas for movement, columbariums and the lake occupy the entire site in an intimate and independent manner. The building is a collection of cylindrical spaces laid out in a clearing. 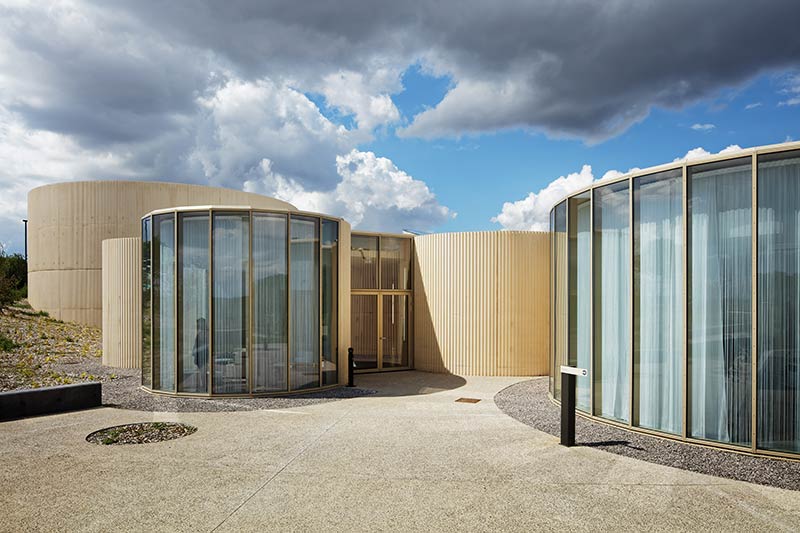 Each room is independent and respects the intimacy of the other. Whilst there is a sole entrance, the exits are independent and separate. This approach helps manage visitors’ arrivals and exits from rooms, avoiding any sudden, embarrassing meetings between different families. Our approach arranges these matters at a time when we do not wish to be controlled by overly strict guidelines. In the same manner, there is no crossover between the ceremonial and “service” spaces, which are independent. 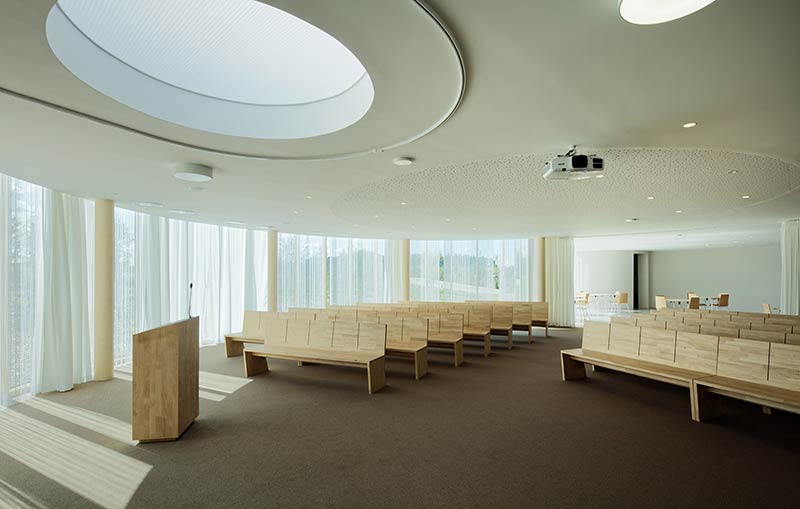 The main central hall is the focus of the ceremony, including both the hall itself and the movement: there are no hallways but fluid spaces which are lit with natural light through the ceiling or through the windows between the rooms. This helps avoid the feeling of being closed in which is often experienced during this type of event.

The spaces are handled in a resolutely contemporary, warm yet simple manner. Light and clear, to emphasize the landscaped setting which surrounds the buildings. The dominant characteristics are light and golden aspects with sculpted concrete which draws out the shadows and the light: continuous flooring, white drapes, clear glass, a white and gold underside which provides indirect and softened lighting.

Stress and the City