Architect’s Statement:
Our intention is to create the architecture that will enhance the beauty of the surrounding natural landscape, rather than substitute it. A simple volume is recessed into a hill with one of its sides and levitates towards the road with another. The straight lines of the white parallelepiped contrast with the undulating greenery of the hills that surround Hyeonpung town. 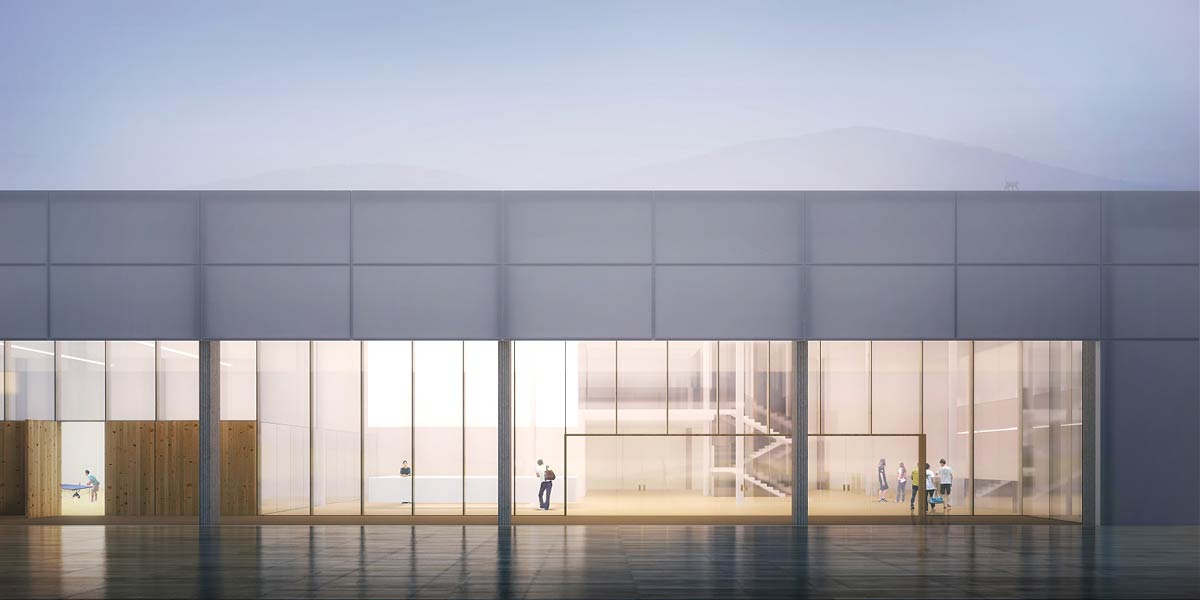 Considering the infrastructural context as a matter of primary importance we propose to fully integrate the public space provided by our proposal with the existing public space belonging to dalseong sports park. The geometry of our site is dominated by the terrace where the previous building used to be. this project proposes to convert the plateau into a pedestrian square connected with the main promenade of the sports park by the footbridge. The bridge will gradually rise to the level of the plateau and will provide the lacking part of the transit walkway connecting the bus stops on the both sides of the site. 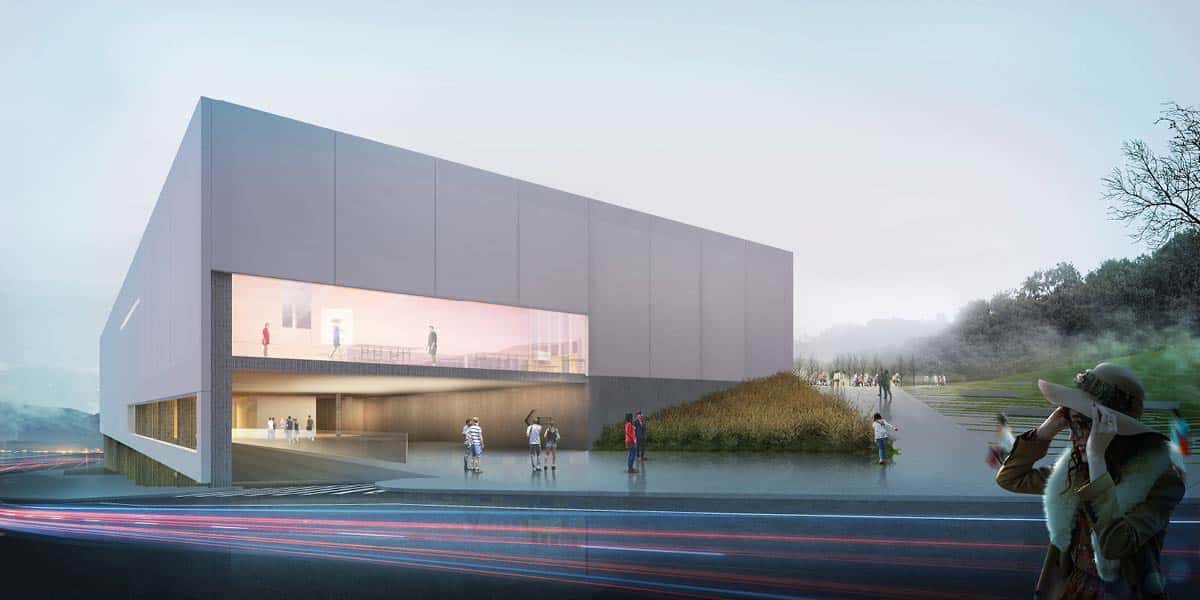 The complexity of the relief gave us the possibility to create two different entrance levels. Consequently, the building, if necessary, may host two independent events at one time. The huge blank volume of the gymnasium is accessible from two levels – parterre and the upper line of the tribunes. A smaller and naturally illuminated multi-purpose hall might be used together with the urban plaza to which it opens. 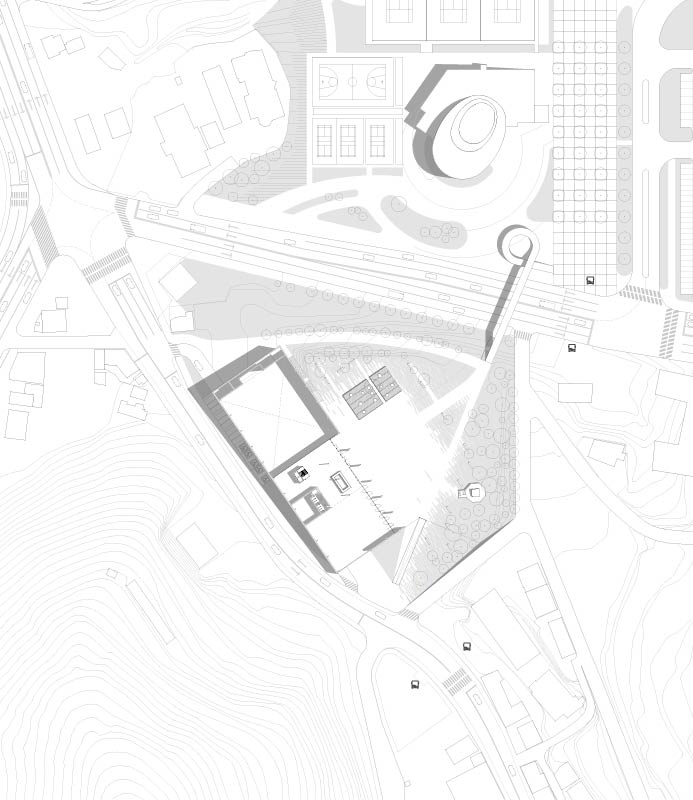 The plaza itself has a range of spaces adjusted for different scenarios – a spectators zone overlooking both the front square and the large screen on the wall, a panoramic area with the view over the hills, a transit zone connecting the bus station and dalseong sports park and a park zone with a monument and a garden of stones. All these spaces do not have strict boundaries and gradually overlap one another.

The parking lot for 55 vehicles is situated beneath the building. not only do the two sport halls have their separate entrance foyers, but they also have different storage and loading facilities. The office spaces and the public address booth are both located on the highest possible level to provide the most favorable view of what is happening in the halls. In the main foyer the visitors can find an infopoint and a cafeteria. 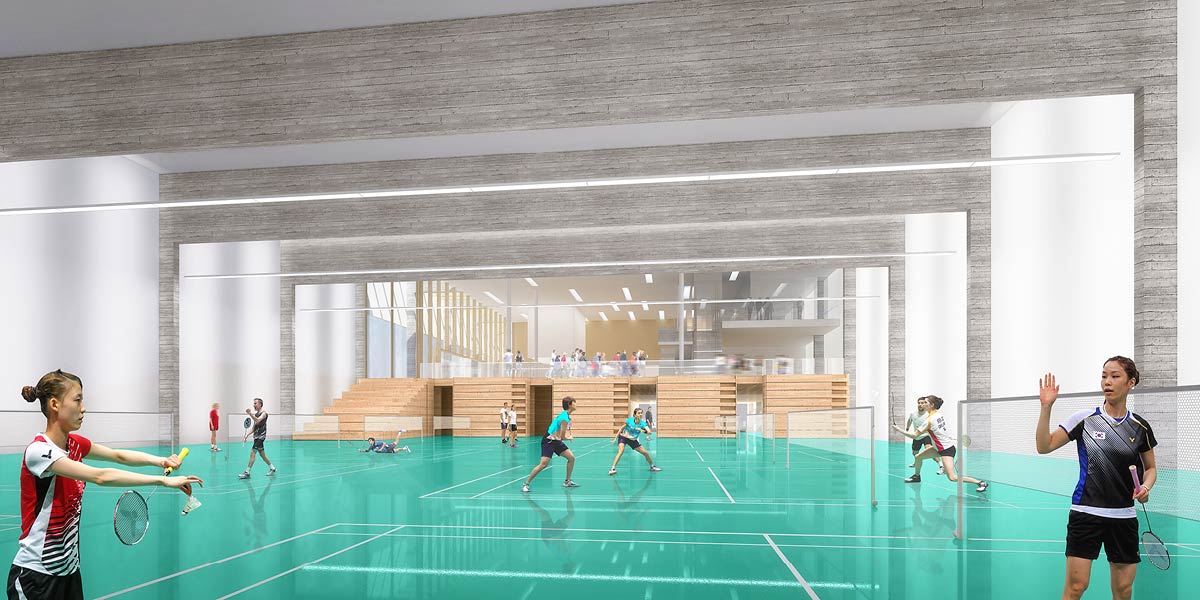 The ceiling of the gymnasium is supported by the slender concrete three-meter high i-beams. The slabs are made of cast-in-situ reinforced concrete with voids created by disposable formwork. The curtain walls are composed in such a way to make them translucent while still efficient in terms of thermal performance. In the dark hours the whole building radiates a welcoming glow. In addition, the usage of translucent insulation provides the possibility to warm up the interior space by solar radiation, thus decreasing the expenses on the heating of such a big volume as the gymnasium.

November 11, 2015
0
FORM studio has completed a remarkable residential scheme on a pencil-thin site in the heart of Covent Garden.