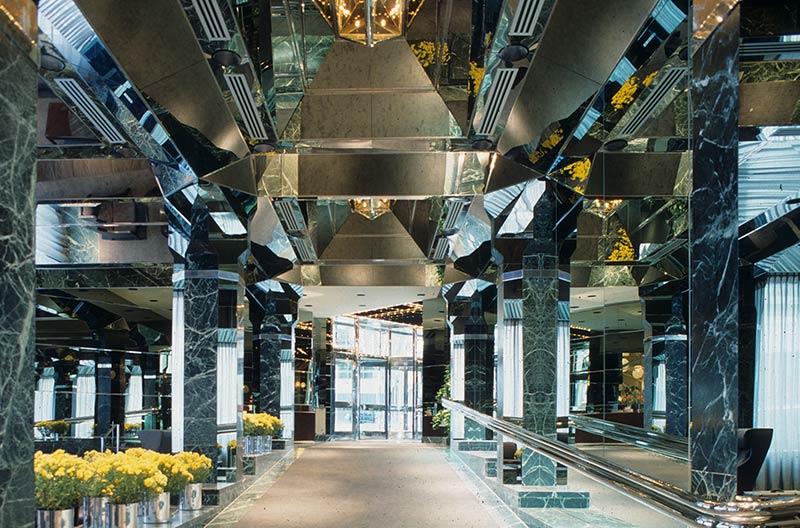 Last week, a group of advocates filed an urgent Request for Evaluation with the Landmarks Preservation Commission for the Ambassador Grill & Lounge and Hotel Lobby at the United Nations Plaza Hotel (now ONE UN New York). These interiors, designed by Kevin Roche John Dinkeloo and Associates, and completed in 1975 and 1983, respectively, are spectacular luxurious rooms, which use mirror, pattern, and lighting to trick the eye into seeing palatial space, daylight, and high ceilings where there are actually none. The Roche Dinkeloo interiors are also among few intact examples of 1970s style left in the city, intended by the architects to draw the prismatic curtain walls of One and Two UN Plaza inside, creating a total work of architecture akin to that across the street at the United Nations proper.

The request was urgent because, though no permits have been issued by the Department of Buildings, Millennium Hotels has made no secret of their plans to update the property. The windows to the Ambassador Grill were recently papered over and Docomomo US reports that some exploratory demolition has taken place—illegally. I urge the Landmarks Preservation Commission to hold an expedited hearing and to keep close watch over 44th Street. […]

March 18, 2019
1
40 Bleecker -- NoHo's newest and most anticipated luxury residential development -- has just reached its full height, this making it in its neighborhood...