Washington, DC (February 2, 2017)—In today’s divisive political climate, where meaningful change is often stalled by partisanship and bureaucracy, it’s easy to feel powerless in the face of environmental challenges like climate change, habitat loss, and disappearing species. But environmentalists are no strangers to opposition, and a look back at their stories may provide the inspiration needed to move forward. In Nature’s Allies (Publication Date: February 2, 2017), Larry A. Nielsen pens eight riveting biographies of great conservationists. Some famous and some little known, their diverse stories are a model for affecting positive, lasting change for the environment. 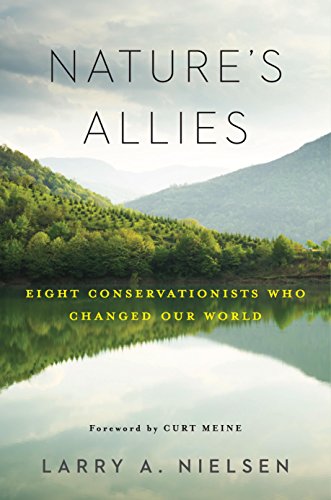 Eight Conservationists Who Changed Our World

Beyond the value of their accomplishments, these individuals may seem to have little in common. One was honored with the Nobel Peace Prize for her commitment to Kenya’s forests; one was murdered for his work protecting Brazil’s forests. One walked thousands of miles on a journey of self-discovery; one seldom left her suburban Maryland home. One directed our attention to the natural rhythms of a small Wisconsin farm; one asked us to consider the entire globe as our backyard. Some took to the streets, others to the airwaves.

But despite their varied personalities, methods, and causes, the conservationists of Nature’s Allies share one powerful thing in common—they all hail from modest backgrounds, and are a testament to the power of one person to bring about extraordinary change. Their stories are not just for environmentalists, scientists, or students. Nature’s Allies is a powerful, engaging read for anyone who wants to be inspired to make a difference.

Larry A. Nielsen is Professor of Natural Resources at North Carolina State University. He has worked in land grant universities—including earlier tenures Virginia Tech and Penn State—for forty years, as a faculty member and administrator, eventually becoming provost of North Carolina State University before returning to teaching and writing in 2009. He is a Fellow and Past President of the American Fisheries Society. He is author, coauthor, or coeditor of six books, including Ecosystem Management, published by Island Press, and Provost, a memoir and an analysis of university administration. Among many professional service roles, he served on the board of directors of the National Council for Science and the Environment for more than a decade. With Sharon, his wife of forty-seven years, he lives in Raleigh, North Carolina.

Anton G.
Anton joined Architecture Lab in 2017 and ever since the platform grew exponentially becoming the global reference point in design for creatives around the world, ranging from DIY enthusiasts to interior designers, architects, engineers illustrator and design amateurs.

Anton joined Architecture Lab in 2017 and ever since the platform grew exponentially becoming the global reference point in design for creatives around the world, ranging from DIY enthusiasts to interior designers, architects, engineers illustrator and design amateurs. Highlights Anton joined Architecture Lab in 2017 Founder of Homesthetics Magazine | 2012 RIBA licensed architect with a background in online marketing Co-founder of the sculpta.ba architecture practice Experience As sheer idealist architect, Anton founded in Homesthetics Magazine to save his favorite, inspiring architecture and design projects, post by post the website slowly grew into an authority in the niche, shaping years of marketing experience for the architect. Since 2017 his expertise has pushed Architecture Lab to new highs, greatly increasing the area of expertise of the website by inviting certified experts into the team and refreshing the curatorial process in his commitment to ensure the most trustworthy advice possible in the realm of architecture and design. Education Anton received UAUIM's Master of Architecture in 2017 with an emphasis on Restauration and Industrial Heritage.

Other Works https://www.mymove.com/home-inspiration/trends/can-design-describe-personality-owner/ -MyMove | Previously Freshome https://www.e-architect.com/romania/mora35-a-sophisticated-home-bucharest - E-architect About Architecture Lab Architecture Lab is a MKR.S Media brand, a website devoted to extraordinary design and aesthetics aiming to promote exceptional aesthetic values and sustainable design in all it’s shapes and sizes. Learn more about us and our editorial process and feel free to contact us if you would like to see something in particular on the website, our certified experts will get back to you with the most trustworthy advice as soon as possible. Read all articles by Anton | Follow him on LinkedIn
Expertises:Architecture,Design,Kitchen,test,test