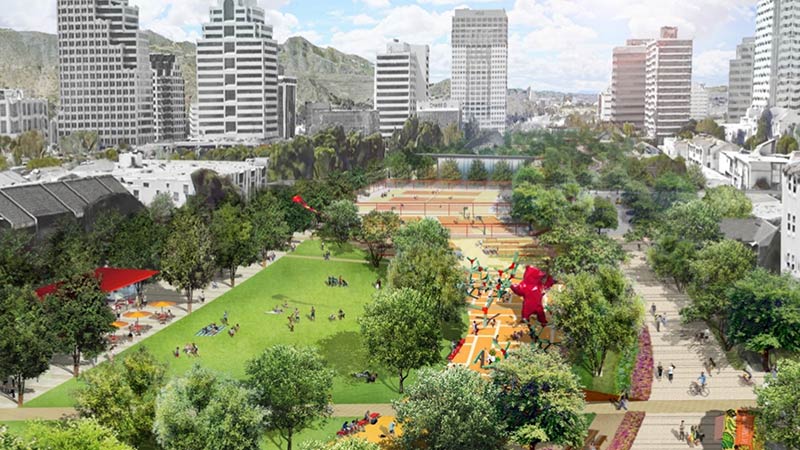 A website created by Glendale’s Community Development Department has revealed new details about Space 134, the city’s $150-million plan to build 24 acres of park space atop a trenched stretch of the 134 Freeway.

The proposed linear green space, slated for a .7 mile stretch between Central and Balboa Avenues, would span from the city’s Downtown district to adjacent residential neighborhoods to the east. Glendale officials have trumpeted the project’s potential to improve public health, reduce pollution and strengthen transit connections to the rest of Los Angeles County.

Although an exact program and design have not been set at this point in time, city officials have worked with landscape architecture firm Melendrez to generate a concept plan for Space 134 through feedback generated through a series of community outreach meetings.

The segment of the park between Central Avenue and Louise Street would serve Glendale’s Downtown, with space for restaurants, farmer’s markets, concerts and other large events. The plan also envisions a mobility hub within the Downtown park, featuring a bike kiosk, carsharing services and a station for a future light rail or bus rapid transit line within or parallel to the 134 Freeway. […]

50 years of gentrification: will all our cities turn into ‘deathly’ Canberra?

Sanctuary: an installation of Aquatic Architecture

April 3, 2016
0
A new clinic in the eastern part of the Democratic Republic of Congo was designed by RSP Architecture of ­Minneapolis and built and staffed by local workers