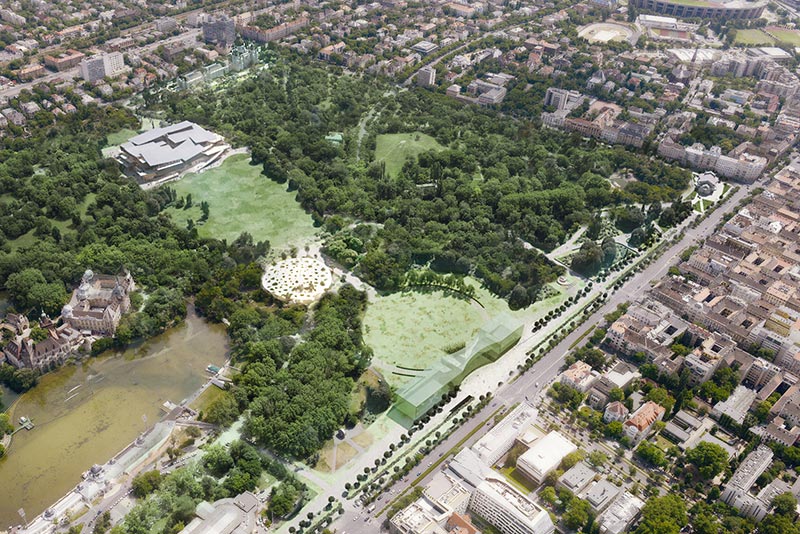 The Liget Budapest Project has announced an international design competition for the new Museum of Ethnography building, to be located on the edge of the Városliget (City Park).

Fifteen prominent international and Hungarian architect offices will participate in the restricted tender for the design of the new museum building, including for example the world famous Herzog&deMeuron, BIG, Bernard Tschumi Architects, Dominique Perrault Architecture, Coop Himmelb(l)au and Rem Koolhaas’Studio, called OMA. The results are expected to be announced in May 2016. According to plans, the new home of the Museum of Ethnography, meeting professional and visitor requirements at the highest standard, will open its doors on Ötvenhatosok Square in 2021, as part of the Liget Budapest Project, aimed at the comprehensive and complex renewal of Budapest’s City Park to become one of Europe’s new recreational and cultural centre.

Thanks to the architectural competition, the Museum of Ethnography, which is currently operating in the former Ministry of Justice building, inadequate both in its size and function for a museum, will finally be given a worthy home. The Museum of Ethnography, established in 1872, is the number one Hungarian institution of ethnographic science, European ethnology and cultural anthropology, as well as the country’s leading museum science workshop, now housed in a building originally not planned for a museum, and therefore unsuitable for exhibiting the collection. Moving the institution into a state-of-the-art building will provide the opportunity to display a significant part of the artefacts, thus far ‘locked away’ from the general public, in a permanent exhibition, under modern circumstances, finally bringing the museum “back home” to the City Park in a new museum building. Indeed, the ethnographic collection had its public debut here at the Millennium Exhibition.

An architectural competition had already been completed for the design of the new Museum of Ethnography building back in 2014 and was won by the French Vallet de Martinis and the DIID architect office; however, following a government decision about the final structure of the Liget Budapest Project, aimed at the renewal and development of the Városliget, the planned site of the Museum of Ethnography was relocated, which necessitated the announcement of a new competitive tender.

As a result of the recently announced competition, a new world class public building will be added to the capital of Hungary. Decisions had been reached within the framework of the Liget Budapest Project about the implementation of two new buildings, both to be designed by internationally renowned Japanese architects. The House of Hungarian Music, to be built on the site of former offices, earmarked for demolition, will be designed by Sou Fujimoto, while plans for the New National Gallery, to be constructed in the place of the Petőfi Events Hall, will be made by the Pritzker Prize holder architectural firm SANAA.

The following participants have been invited to the new architectural competition: Herzog&deMeuron, MVRDV, BIG – BjarkeIngels Group, Bernard Tschumi Architects, Dominique Perrault Architecture, Sauerbruch Hutton, Coop Himmelb(l)au Architects, Emre Arolat Architects, OMA, Közti Zrt., Balázs Mihály and the BUTE Faculty of Architecture, Napur Architect, Bánáti + Hartvig Architects. At the moment there are two places not yet filled by any candidates, for which domestic and international architect offices will be able to compete, based on their previous references.

The submitted projects will be evaluated by an 11-member jury of Hungarian and international museum and architectural experts, and the results are planned to be announced in May 2016. The City Park, which will be revamped in all aspects by the end of the decade, will not only be home to new institutions but old institutions located here will also be renewed, while the green area of the City Park will be rehabilitated and significantly enlarged. The dialogue between the park and the built-up environment is a priority in the realisation of the Liget Budapest Project, which serves the renewal of the Városliget, so the proportion of the built-up area in the City Park will be kept under the legally stipulated 7 percent and the green area of the park will be increased by tens of thousands of square meters, from the current 60 percent to 65 percent.

Refurbishment of Ministry of Labor and Social Policy / FAAB

Can I repair a broken LEGO brick with glue?

Traditional Vietnamese Architecture at Peace with Modernity at Amanoi

June 15, 2015
0
Amanoi sits within a green setting but is surrounded by a mixture of contrasting natural elements, including its own private white sand beach, the fortified green mountains on high, and a tranquil lotus lake