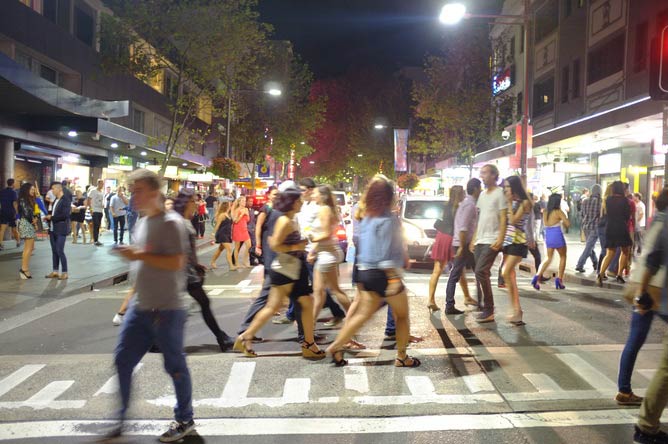 Sydney’s Kings Cross is historically renowned for its vivid nightlife and, more recently, for its alcohol-fuelled violence.

Over the years, the local and state governments have attempted to reduce this violence by ever-tightening regulations and increasing the police presence in the area. As a consequence, revellers are treated like (potential) criminals rather than young partygoers seeking a good time.

These law and order solutions solve some problems but create others. NSW’s 2014 lockout laws were successful in reducing inner city violence but have led to the closure of many of Sydney’s treasured venues. Residents of other suburbs report fear that lockouts just displace the problem.

In 2012, focus on the precinct intensified after 18-year-old Thomas Kelly was killed by an intoxicated stranger in a one-punch assault. After that incident, designers at the Designing Out Crime research centre, alongside the City of Sydney, took up the challenge of decrypting the Kings Cross nightlife to devise solutions to minimise violence in the area.

The design team approached the problem by imagining Kings Cross as a music festival. The aim was to identify areas of improvement that would create a safer environment while keeping partygoers happy.

A music festival is an organised event that attracts tens of thousands of attendees to a central location to have a good time. Music festivals provide revellers with access to amenities, transportation to and from the event, support and continuous entertainment, while allowing them the necessary freedom to choose activities, socialise and express themselves. This metaphor for an “organised” approach to Kings Cross paved the way for suggested areas for improvement.

The researchers focused their design exploration on two themes: distraction and extraction. […]

The Story Behind Architecture For Humanity’s Surprising Rebirth

January 21, 2016
0
Architecture for Humanity closed last year - but a new, locally-driven design nonprofit is rising from its ashes