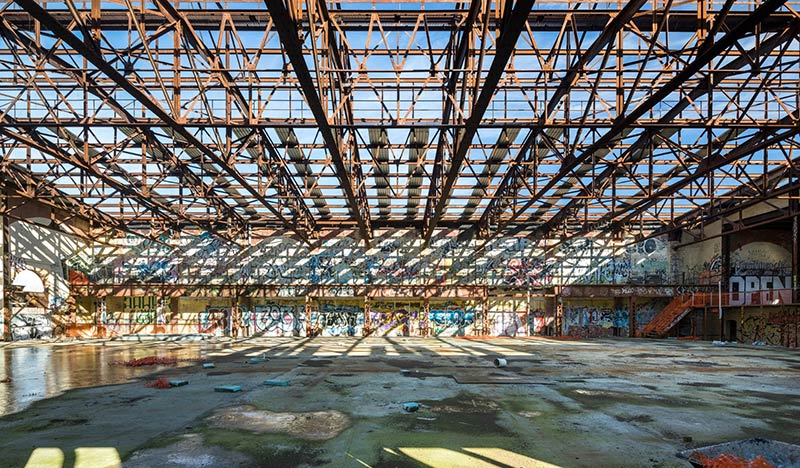 Despite its Superfund status, the Gowanus Canal has ushered in a Whole Foods, an artisanal ice cream factory, and more than one high-end residential development, but one vestige of its gritty, industrial days has remained–the so-called Batcave. Build in 1904 as the Brooklyn Rapid Transit Company’s Central Power Station, the warehouse was taken out of service in the ’50s, becoming in the 2000s a home for squatters, venue for impromptu dance parties, and unofficial street art display. But it looks like the former warehouse will now join the ranks of its Brooklyn-esque neighbors, as the Times reports that Pritzker Prize-winning Swiss architecture firm Herzog & de Meuron will transform the space into an art production factory and exhibition space to be called the Powerhouse Workshop, though it will preserve the iconic graffiti.

The project is being spearheaded by the nonprofit Powerhouse Environmental Arts Foundation, whose founder, philanthropist Joshua Rechnitz, acquired the property for $7 million in 2012. He originally planned to turn it into studios but then learned of the community’s need for a fabrication space. Executive director Katie Dixon told the Times, “The building has long been a destination for artists, and we wanted to keep it that way.” It will house space for metalwork, woodwork, printmaking, ceramics, and fiber art, as well as exhibit space. […]

The Making of Wall Art – Painting With Acrylics – Tips and Designs

How We Picture a City: Venice and Google Maps

The problem with The Broad is the collection itself