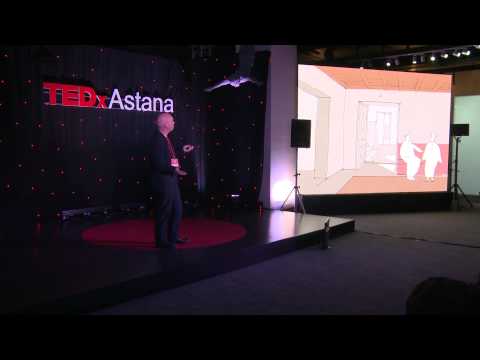 Mike Oades, architect, thinks that Astana can be a touristic centre with its architectural landscape, but city should be more authentic and Kazakh. Another big question is how to create a comfortable environment for inhabitants. Mike gives an example of Berlin, where historical buildings were not demolished but modified, and sustainability and comfort of people were among priorities during city developing. Mike suggest to use more ethno motifs in Astana and shows examples of Kazakh designers, entrepreneurs and architects who combine ethno Kazakh elements with modern approach in their works.

Mr. Oades is a founding Director of Atomik Architecture, based in London and Almaty. His portfolio includes the concept design of the “Palace of Peace and Reconciliation”, executed while working at Foster + Partners. More recently, he led the winning design of the Green Quarter competition, part of Expo 2017.

This talk was given at a TEDx event
Aline Chahine
Aline is an international licensed architect currently practicing in Canada, she is the reason you are reading this right now, Aline founded the platform back in 2008 shaping the very foundation of Architecture Lab, her exemplary content curation process that defines the online magazine today.