College Hall, the main administration building at Gallaudet University in Washington, D.C., is a High Victorian marvel, a Gothic confection of chimneys, turrets, and gables in red brick striped with creamy stone. The president’s office is on the second floor, midway up an ornate staircase. There you can see an unusual artifact—a doorbell device, in a wooden case a few feet high, used after the building opened as a men’s dormitory in 1877.

To operate it, you would stand in the hallway and pull a chain. Then, inside, a lead weight would drop to the floor. Vibrations from that thunk alerted residents that someone was calling. A standard doorbell wouldn’t have worked because residents wouldn’t have heard it: Gallaudet is a university for the Deaf. 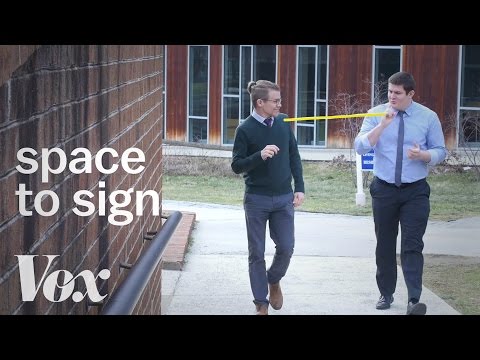 Founded in 1864, Gallaudet is still the only liberal arts institution geared to the Deaf and hard of hearing in the United States—or, for that matter, in any country (a school motto is “There is no other place like this in the world”). It is where the football huddle was invented, players shielding their hand signs from opponents’ eyes. Today, there are about 1,900 students on the Olmsted-designed campus in Northeast Washington, where American Sign Language (ASL) is the preferred mode of communication. Some are profoundly deaf; some have a degree of hearing and may have cochlear implants or use hearing aids.

For many at Gallaudet, including people who can communicate through speech, deafness is not an impairment or even an inconvenience. Deaf (with a capital D) is a cultural identity that stems from pride in signed language and what Deaf Studies professors call “Deaf ways of being,” or shared sensory experiences and cultural traditions.

So the old doorbell, while a curiosity, isn’t an idle one. It’s evidence of something Deaf people have always done, which is to adapt the physical environment, designed for the hearing, so that it better suits how they interact—and, quite simply, who they are. […]

Continue Reading – Source: Curbed
Aline Chahine
Aline is an international licensed architect currently practicing in Canada, she is the reason you are reading this right now, Aline founded the platform back in 2008 shaping the very foundation of Architecture Lab, her exemplary content curation process that defines the online magazine today.