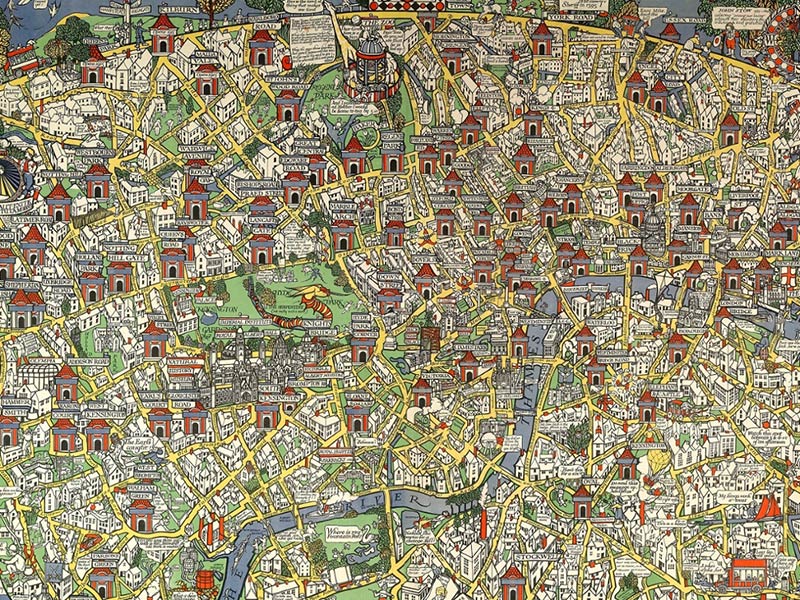 A stripey serpent writhes up from the middle of Hyde Park, flicking its tongue towards fleeing crowds, as an exotic bird gobbles up a small child in London Zoo, poking its sharp beak through the cage. A hot-air balloon floats over Kennington, and a plane loops-the-loop above Kilburn, while the rest of the city busies itself below with an air of medieval festivity.

As Europe was about to tear itself to shreds in 1914, this is how the London Underground chose to depict the city, with lavish “Wonderground” maps hung in every station. Packed with little jokes and mischievous details, it was a clear bid to cheer up commuters and distract them from the over-crowded, filthy carriages into which they were about to be squeezed.

Often credited as the map that saved the Underground – doing wonders for the public image of a service on its knees – the fantastical scene was drawn by MacDonald “Max” Gill, younger brother of the master sculptor and chisel-wielding paraphiliac Eric Gill. While the elder Gill’s prolific output, and rapacious sexual appetite (which saw him conquer not only his daughters but the family dog), cemented his place in history, Max has been largely forgotten, consigned to his role as the uncontroversial map-making sibling.

August 2, 2016
0
The Olympic games are notorious for leaving burdensome buildings in their wake but Rio is going with structures that can be removed, rebuilt, and repurposed