I am not attracted to straight angles or to the straight line, hard and inflexible, created by man. I am attracted to free-flowing, sensual curves. The curves that I find in the mountains of my country, in the sinuousness of its rivers, in the waves of the ocean, and on the body of the beloved woman. Curves make up the entire Universe.

It will be apparent when Ian Schrager’s 160 Leroy building rises out of the ground that it was inspired by the philosophy of the great Brazilian architect Oscar Niemeyer—which Pritzker Prize winning architects Herzog & de Meuron used as a starting point in conceiving this original, new iconic structure. The building is exactly as Niemeyer describes: curvaceous, sensual, free-flowing, seductive and sexy. Much like at the hand of a sculptor, this creation possesses a tactile quality and evokes a sense of purity and pristineness with its white concrete façade and diamond faceted floor-to-ceiling windows that reflect the sky and the water. There is a distinctive inherent rhythm to the building, making it otherworldly at any perspective. 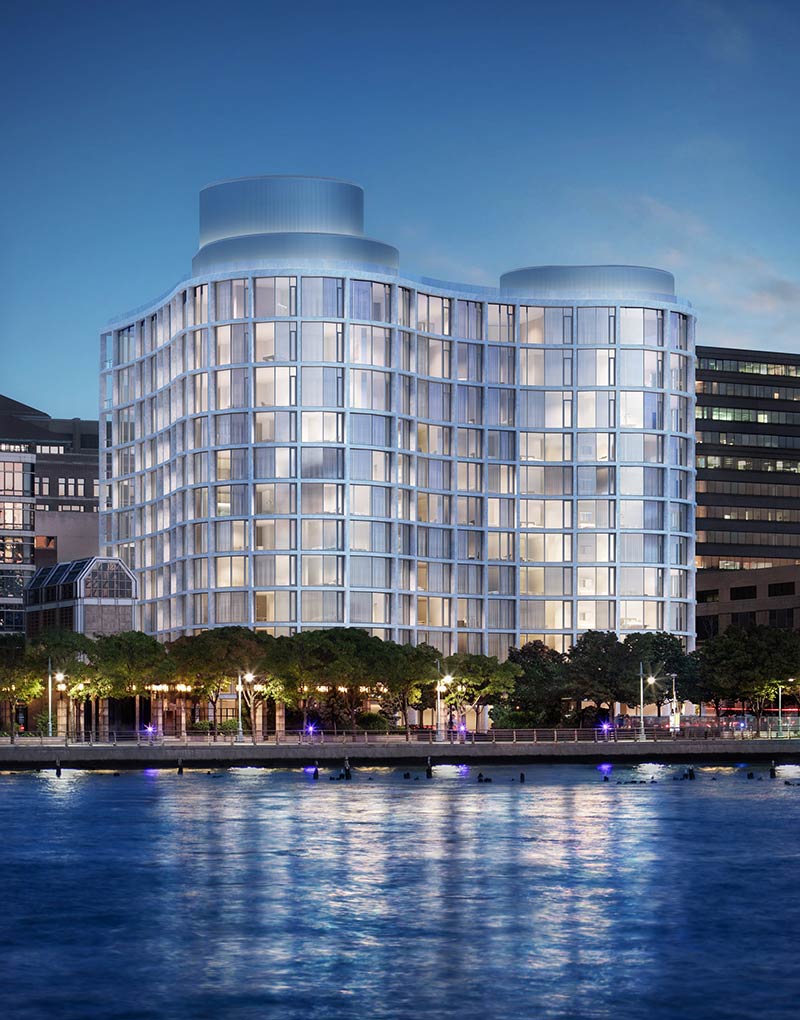 Despite its shape, 160 Leroy was designed from the inside out. The bespoke layouts of the 49 one-of-a-kind apartments are spacious and comfortable, maximizing the expansive views of the Freedom Tower, the Hudson River, North towards the George Washington Bridge and city views East. Some of the apartments even possess views East and West from the same Great Room for rare, idyllic sunrise and sunset views. The layouts were designed for the modern lifestyle—open floor plans to accommodate both entertaining and family life, with just the right amount of privacy. “The only thing that mattered to me was to turn a residential apartment into a real home,” says Schrager, “I sought to capture the details of life in the details of the architecture.” The thoughtful layouts maximize light and views while taking into consideration a specific market of art collectors by offering an abundance of wall space for hanging art.

The International Style that emerged in the 1920s and 1930s, led by Ludwig Mies van der Rohe, J.J.P. Oud, Le Corbusier, Walter Gropius, Richard Neutra, and Philip Johnson, was a turning point in architecture and design—a modernist movement that attempted to capture the social essence of a new era. A harmony between artistic expression, function and technology, it established a pared down and disciplined new architecture devoid of ornamentation and superfluous gestures. With 160 Leroy, Ian Schrager has created a new International Style that is updated and evolved for the 21st century’s intellectual, well-traveled, global citizen who seeks a more sophisticated product and unlike anything else.

Residents cross through the arched entryway of the building into a lush private landscaped courtyard and find themselves immersed in a serene, pastoral garden designed by Madison Cox, with a specially chosen 30-foot willow tree, boxwood hedges, ivy covered walls, undulating lawn and benches for enjoying the space. If it weren’t for the old-world New York City cobblestones that pave the driveway, you wouldn’t even know you were in New York City. “The courtyard is one of the many features that sets 160 Leroy apart from all other new residences in the city,” says Schrager. “It’s a separate intense reality. The experience of arriving at 160 Leroy will be transformative.”

Inside, the lobby’s curving, specially imported glass walls bring the atmosphere of the verdant courtyard indoors—blurring the distinction between inside and outside—where the cobblestone gives way to imported Pietra Serena floors—it is like going on a journey from the sidewalks of 19th century old New York to the sidewalks of Florence and ending up back in New York again in the 21st century. Framed in rich mahogany, the custom designed glass evokes the luxurious window vitrines of a fin de siècle Viennese department store. All of these global references come together and an alchemy happens. The end result is a sum greater than the individual parts. This fresh, new look is impossible to categorize.

Fluted mahogany panels are dramatically uplit to create an intimate but welcoming entry that glows invitingly in the evening. Off of the lobby, a private 70-foot pool and whirlpool spa with floor-to-ceiling glass, abounds with natural light. There is also a recreation lounge area complete with a state-of-the-art kitchen suitable for private events, a kids’ clubhouse ideal for birthday parties and a gourmet take-out and delivery restaurant. A few steps below the jewel box-like lobby is a fully equipped state-of-the-art fitness center with a yoga room, a sauna and steam room with changing rooms, and a fully equipped private massage room. “We chose amenities that enhanced living. We didn’t want to overdo it and offer amenities that were not useful. We especially did not want to get roped into the amenity arms race going on today,” says Schrager.

Situated in the West Village, the project reunites Schrager with Herzog & de Meuron, whose previous collaborations in Manhattan include 40 Bond, a radical redesign of a traditional cast-iron building that was the architects’ first residential project in the United States, and 215 Chrystie, a groundbreaking hotel and residential project on the Bowery set to open in 2016. In the last decade, new developments designed by world-class architects have grown up in the handful of waterfront lots available in the West Village. Schrager identified the site of 160 Leroy as the last chance to create an important contemporary addition to this special neighborhood and possibly the last chance to own a home on the water in the West Village. Stretching a full city block, set on a plinth of white concrete and floating on a bed of light, the building connects with the surrounding streets while also seeming to hover above them—like a spaceship, with its illuminated base that glows at night.

At 160 Leroy, Schrager has reinvented the kitchen using Bulthaup’s state-of-the-art products. The Social Kitchen, with its countertops of pristine Sivec marble—used in Ancient Roman Baths—seamlessly integrates into the living area, creating a beautiful stage for life to unfold. The Social Kitchen is complemented by a specially laid out Chef’s Kitchen for everyday use—a modern, rethought European-style larder or so-called “dirty kitchen”—complete with a Miele integrated coffee/espresso machine, steam oven, wine refrigerator as well as other useful, functional elements. It is like having two distinct, separate kitchens. Residents will have the flexibility to prepare meals out of sight, but within earshot of anyone seated in the Social Kitchen or Dining Area. This level of harmonious planning and detail appears throughout the residences, including in bathrooms, with their individualized finishes, and in the private outdoor lounges, which erase the barrier between outside and inside.

“Starting in the 1930s, apartment buildings in New York City defined the modern lifestyle in every way. We wanted to take the best of that golden era and bring it into the future, reimagining it for the contemporary residents and families,” says Schrager. “This is a building where the whole is greater than the sum of the parts. It’s the evolution of effortless luxury living and a truly new New International Style.

Over and above architecture: Bridges that are going places

August 18, 2014
0
From Islands to hotels and treehouses, ideal homes from waste materials