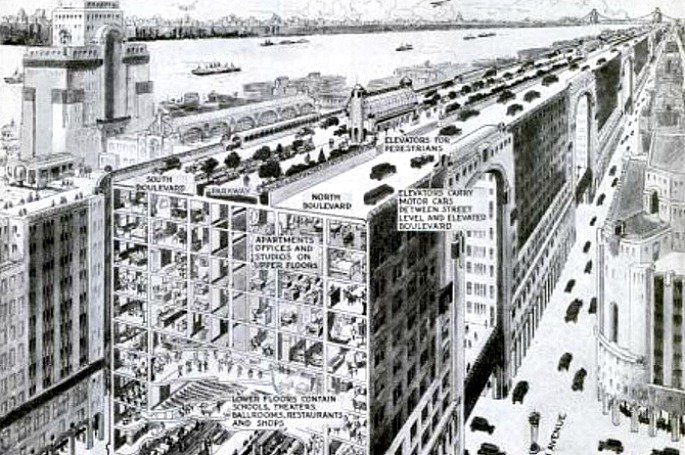 In the early 20th century, engineers and architects were certainly thinking outside the box when it came to city planning here in New York. There was the proposal to fill in the Hudson River for traffic and housing, the idea to create a giant conveyor belt to carry people between Grand Central and Times Square, and the plan to stack the city like a layered cake. Though these ideas sound whacky, they were born from the rise of the automobile and suburbinization. With many Americans moving out of urban centers, planners sought new ways to reimagine the modern city and entice car-loving prospects.

Another such idea is this 1927 one for a 16-mile elevated highway that would have traveled across building rooftops from the Battery all the way to Yonkers. Conceived by engineer John K. Hencken, it required all buildings to be uniform at 12 stories. Within them would have been standard uses — residences, offices, schools, theaters, restaurants — and elevators to take cars from the street to the skyway. […]

What the computer chip of the future shares with skyscrapers of...

December 18, 2015
0
Tall buildings were the vanguards of the modern world. They completely changed how cities functioned, bringing forth totally new social and urban systems