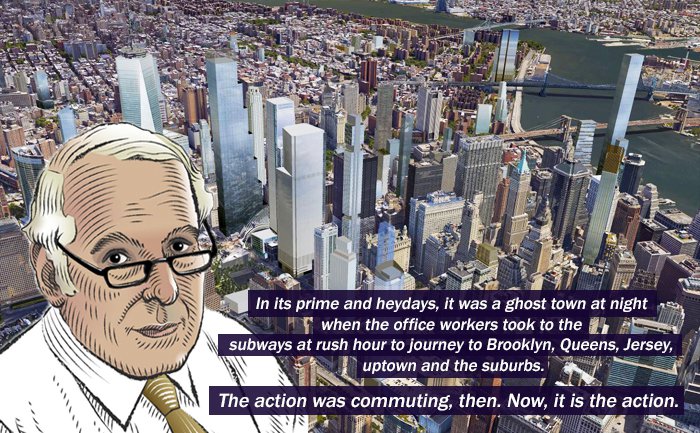 Lower Manhattan at the start of the Great Depression was the world’s most famous and influential skyline when 70 Pine, 20 Exchange Place, 1 and 40 Wall Street, and the Woolworth and Singer buildings inspired the world with their romantic silhouettes in a relatively balanced reach for the sky centered around the tip of Lower Manhattan.

Midtown was not asleep at the switch and countered with the great Empire State, the spectacular Chrysler and 30 Rockefeller Plaza but they were scattered and could not topple the aggregate visual power and lure of Lower Manhattan and its proverbial “view from the 40th floor” as the hallowed precinct of corporate America until the end of World War II.

The convenience and elegance of Midtown, however, became increasingly irresistible to many.

David Rockefeller dug his heels in and fostered the construction of the mammoth One Chase Manhattan Plaza skyscraper that dramatically blunted the downtown skyline but was such a dramatic act of faith that before long the twin stainless-steel towers of the World Trade Center rose up awesomely, disrespecting the skyline’s centrality but giving the city a new, asymmetrical and taller skyline.

The twin towers were designed by Minoru Yamasaki of Seattle with Emery Roth & Sons of New York, and their very shiny facades gleamed most impressively even though their very narrow windows inhibited their vistas greatly. One of the towers boasted the lavish and very expensive Windows on the World Restaurant, but most of the public settled rather happily for its huge basement mall of shops and eateries beneath its usually wind-swept enormous plaza where a bloodied King Kong fell in the first remake of his movie.

When the towers, which were intended to bolster the economic well-being of Lower Manhattan, were erected, their excavated foundations formed the barren, 92-acre landfill in 1975 that would eventually become Battery Park City. The towers initially were on the riverfront and much of their 10-million-square feet of office space remained vacant for some time.

Despite their depressing economic impact on downtown office leasing and their oft-kilter tilting of its skyline their irrespressible shine and their tense duality “doubled down” their worldly impact and helped New York regain its dominance as the world’s high-rise center even though the towers were eclipsed in height a bit by the Sears Tower in Chicago first and then by the twin Petronas Towers in Malaysia somewhat later. […]

Why is Gaza reconstruction so slow?

December 18, 2015
0
Cultural Center La Gota is a hybrid building for exhibition spaces that aims to create a new focus of urban centrality in Navalmoral (Cáceres)