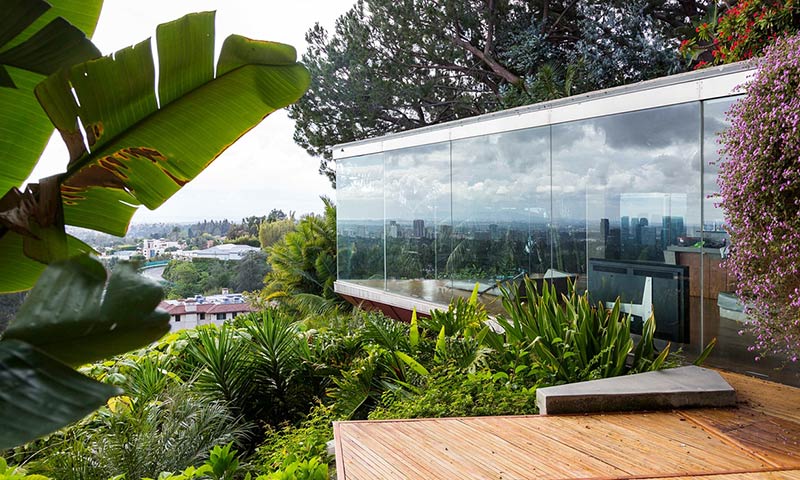 To get to architect John Lautner’s Sheats-Goldstein house in Los Angeles, you drive upward to where the Hills of Beverly become mere mounds compared with the vertical winding lanes of Beverly Crest. On a sharp turnout, there’s an empty lot with a dramatic view of Miracle Mile to the east and Century City to the west. An opening in the lush vegetation leads to a narrow and steep descent at the end of one of the most photographed houses in the city, which seems hidden amid greenery.

“There are almost no 90-degree angles in the house. John was very much opposed to a box-like approach to design,” explains owner James Goldstein, the septuagenarian businessman who just donated the house and its contents to the Los Angeles County Museum of Art. With a purchase price of $185,000 in 1972, the current bottom line comes to north of $40m, including the site-specific skyspace installation by light-and-space sculptor James Turrell, as well as artwork by the likes of Ed Ruscha and Kenny Scharf.

Goldstein hopes to inspire future architects by opening the house to the public through the museum (on limited occasions only while he still lives there), and help foster a greater appreciation for contemporary architecture. “I don’t understand why people give their art, worth many millions of dollars, and don’t think about giving their houses when their houses are a work of art.” […]

June 6, 2019
0
High-end kitchen builds or renovations typically come down to a choice between marble or granite countertops. Both are great materials that make a kitchen...