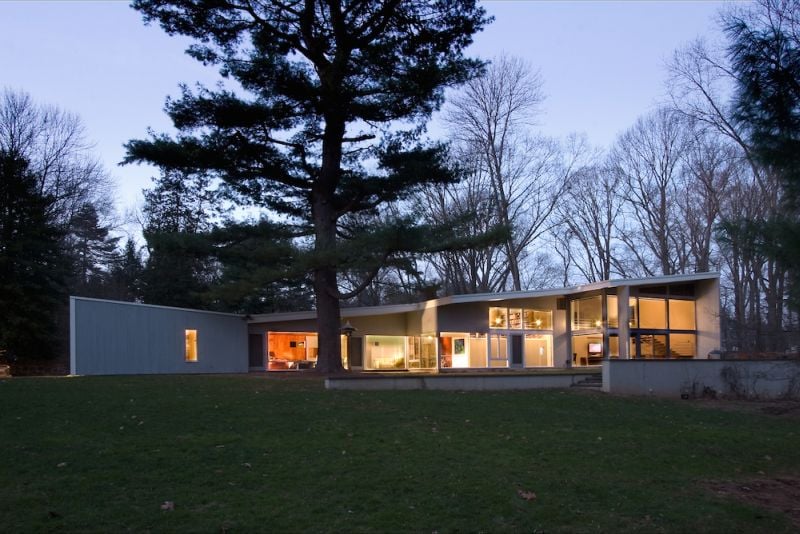 In 1949, Philip Johnson commissioned a series of exhibition houses for MoMA’s sculpture garden, to offer up an “economical solution for an individually built, architect-designed country home,” as an alternative to the prefabs and Cape Cod-style dwellings filling America’s new suburbs. The “House in the Museum Garden” series may not have had the transformative effect he hoped for, but for Marcel Breuer, who designed the first home in the series, the exposure yielded a handful of commissions built in the same style. These included the Lauck House, on four acres in Princeton, New Jersey, which was recently put on the market for $2M.

A 2011 Dwell article on Breuer’s original MoMA home—which the Rockefellers purchased and had rebuilt on their estate, in Pocantico Hills, New York, where it now hosts the resident artists of the Rockefeller Brothers Fund—shows a very close resemblance. Both were built with butterfly roofs, and a “bi-nuclear” layout so that they could adapt as families grew, essentially creating ‘apartments’ at each end; the master bedroom and master bath in one, and bedrooms, a bathroom, and a playroom at the other, with a kitchen in between. ….

Why cities should stop building museums and focus on festivals

Welcome to Building 20, the sprawling fortress that serves as Facebook’s California nerve centre

October 25, 2015
0
Rising from a through-block site at 325 West Broadway, the 48,000 square foot development will house 21 light-filled residences upon its completion early next year...