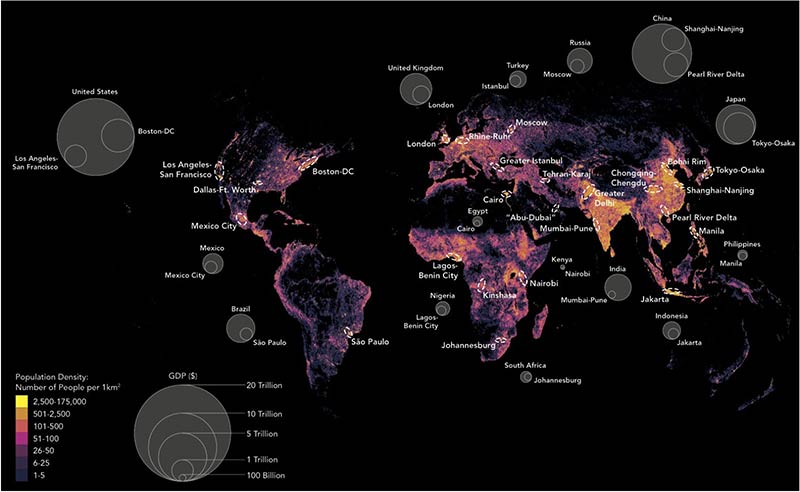 Cities are mankind’s most enduring and stable mode of social organization, outlasting all empires and nations over which they have presided. Today cities have become the world’s dominant demographic and economic clusters.

As the sociologist Christopher Chase-Dunn has pointed out, it is not population or territorial size that drives world-city status, but economic weight, proximity to zones of growth, political stability, and attractiveness for foreign capital. In other words, connectivity matters more than size. Cities thus deserve more nuanced treatment on our maps than simply as homogeneous black dots.

This map from my new book, Connectography, shows the distribution of the entire world’s population, with yellow representing the most dense areas. These zones are, not surprisingly, where you find the dashed ovals that represent the world’s burgeoning megacities, each of which represents a large percentage of national GDP (indicated by the larger circles) in addition to its role as a global hub.

Within many emerging markets such as Brazil, Turkey, Russia, and Indonesia, the leading commercial hub or financial center accounts for at least one-third or more of national GDP. In the UK, London accounts for almost half Britain’s GDP. And in America, the Boston-New York-Washington corridor and greater Los Angeles together combine for about one-third of America’s GDP. […]