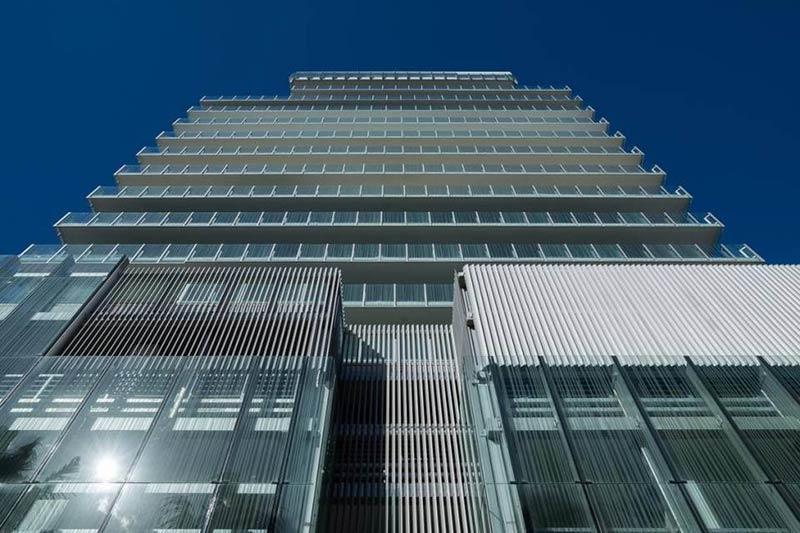 “It’s a building that tends to disappear,” said architect Rene Gonzalez, leaning over the seventh-floor balcony of 120 Ocean Drive, an 18-story residential tower that recently came to completion in South Beach. This is not just another building wrapped in glass, but rather a nuanced celebration and reappraisal of a material and its inherent virtues of transparency, reflectivity and enigma.

Indeed, the official name of the building is “GLASS.” It evokes the Glasarchitektur of Bruno Taut and the Crystal Chain of German architects in the early 20th century, in which the magical qualities of the material were treated with a cult-like obsession. Taut and his circle envisioned an all-glass architecture that dematerialized itself through a kind of alchemical process. Buildings would become aerial hovering elements that, in turn, could liberate humanity from earth-bound gravity and all the tragic weight of the past. “Caryatids can be seen summoning hope,” wrote Herman Finsterlin, poet-mystic of the Crystal Chain. “Clouds carry away their burdens.”

This is more or less the ideal for a waterfront architecture in Miami Beach in which the illusion of preternatural suspension — a limitless merging of sea and sky — is the desired effect and has been for developers and architects since the 1920s. (Tourists and part-time residents really don’t want to know about sea-level rise or social unrest.)

Approaching it from the north, 120 Ocean Drive casts a pagoda-like silhouette, rising as a distinctly cool presence among a jumble of architectural styles, mostly older Deco and post-modern buildings with eclectic roof lines, jutting balconies, pastel-colored slabs. In contrast, the 18 stories of 120 Ocean Drive convey a quality of “least resistance” to both the street and surrounding buildings as they reflect the gray-blue hues of sky and an occasional passing cloud. […]

A floating forest for Rotterdam

Kunst in Weidingen by Axt Architekten

Behind the Biennale – A look into the most important Art Exhibition

How to build a “post-Ferguson” police station