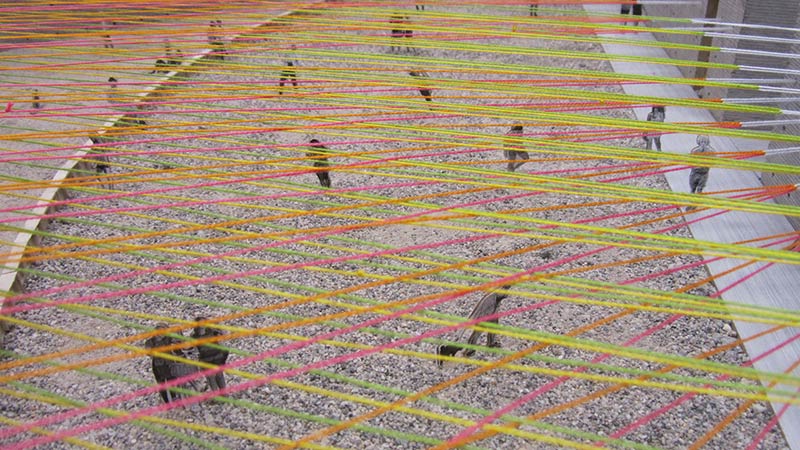 Now in its 17th year, the Young Architects Program at MoMA PS1, an international competition to choose a designer to transform the museum’s courtyard in Long Island City, Queens, each summer, has previously seen structures with the ability to purify water; ones made from corn stalks and living roots; ones consisting mostly of bungee cords and others with cardboard columns that could grow herbs and dispense juice.

This year’s winner, Escobedo Solíz Studio — a partnership between Lazbent Escobedo and Andres Solíz in Mexico City, founded in 2011 — tacks toward simplicity and color, relying on the summer’s givens, sunlight and heat, to supply the rest. The project, called “Weaving the Courtyard,” which opens in early June, will use the pattern of holes in the courtyard’s concrete walls, formed when the walls were originally poured, as a template for the weaving of a colorful rope canopy — or what the architects call a cloud — over the outdoor space. Underneath the cloud will be embankments with platforms of soil and water and a reflective wading pool in the rear of the courtyard in which visitors will be allowed to dip and cool off.

Mr. Solíz and Mr. Escobedo described the creation as “neither an object nor a sculpture standing in the courtyard, but a series of simple, powerful actions that generate new and different atmospheres.” Because the building materials will be mostly unaltered by the construction process, the museum said, they can be reused for other purposes, an important factor for the competition, which has long highlighted sustainable architecture and recycling. […]

Inside Queensland’s library of the future

A do-over for Ike: Scrap the pricey memorial design and hold a public competition

November 4, 2015
0
If you have lived in Detroit's greater downtown for even a year, you've noticed rapid transformations taking place all around you