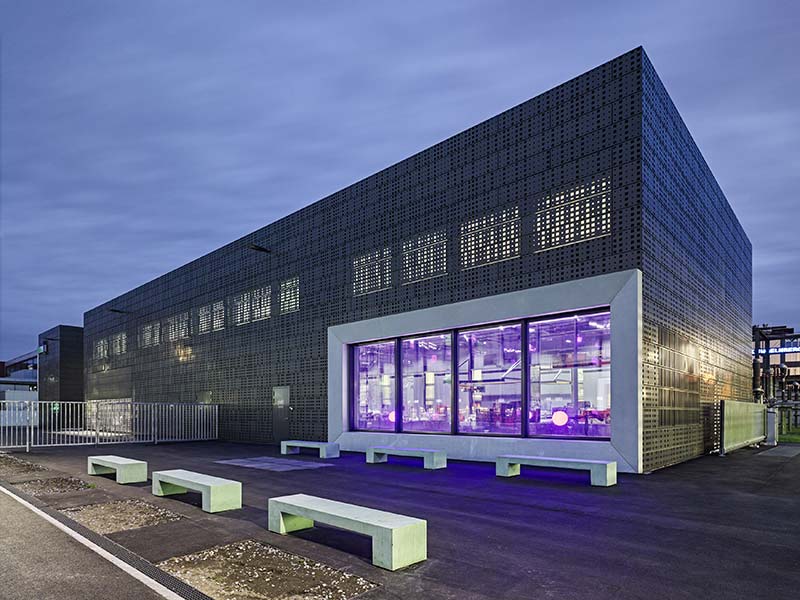 The municipal power station of the city of Zurich (ewz) is putting switchgear and transformers on the public stage in Oerlikon. After five years of planning and construction, the underground substation has its grand opening on 29 August. Soon, passers-by will be able to see into the heart of this source of power: where cutting edge power technology meets contemporary art. 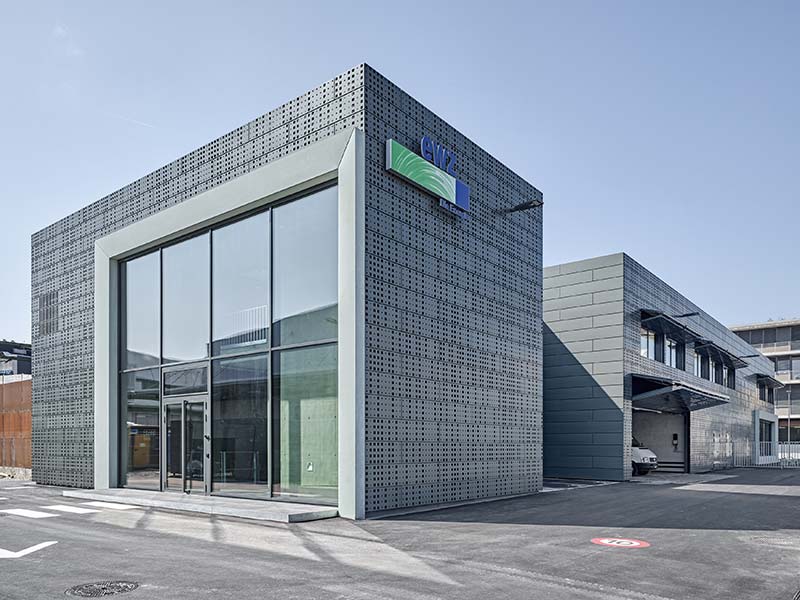 Experience energy with ewz
Rising consumption, decentralised supply points and the resulting and increasing fluctuations in consumption – these are some of the current challenges that must be overcome in the distribution of electricity. Operators are required to adapt to these shifting conditions by investing in the expansion and capacity of their electricity distribution networks. Brimming with confidence and the desire to make smart power technology accessible to the public, the Zurich power station (ewz) chose an unconventional approach for the construction of their new ewz substation in Zurich Oerlikon: They didn’t want to hide their valuable investment underground, but make it available to the public – in spite of all the necessary safety precautions. 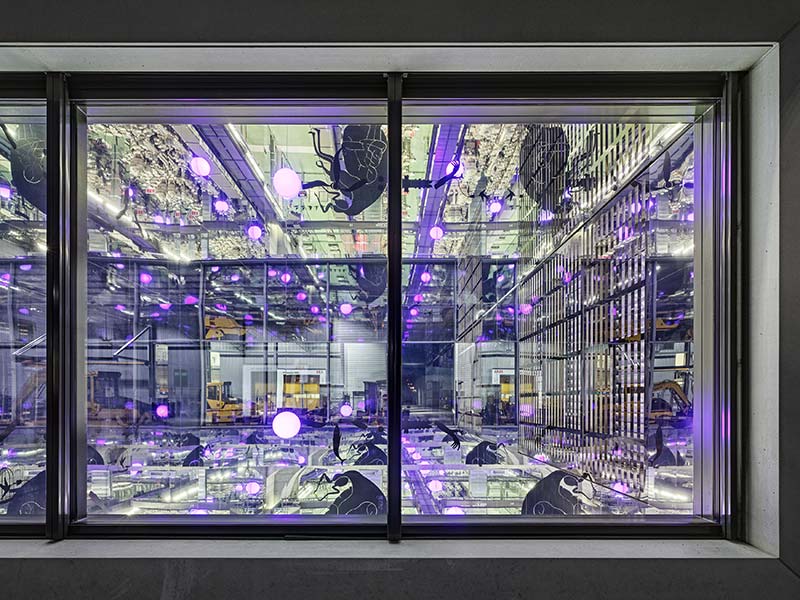 Underground, yet in the midst of it all
A substation is used to supply or transform electricity of different voltages. The existing outdoor switchgear at Binzmühlestrasse could no longer meet the needs of 21st century demands. Built in 1949 between factory and machinery halls, the complex now sits in the midst of one of the largest inner-city urban revitalisation areas in Switzerland. 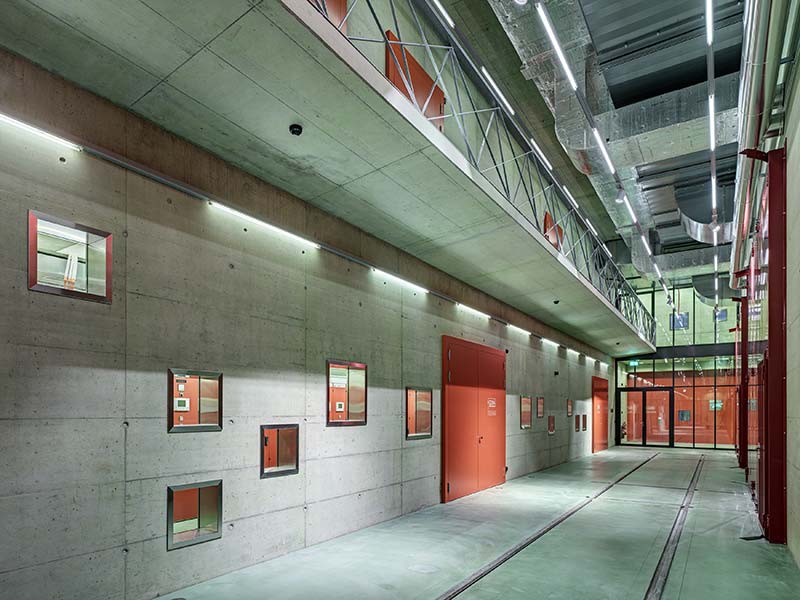 That’s why the new substation, including transformers, switchgear and related infrastructure has been installed in a compact and space-saving underground facility. With three underground levels, the building reaches depths of up to 13 metres below the water table. To leverage site synergies, a two-storey network support base has been constructed on top of the substation to serve as a centre of operations for maintenance work on ewz’s network.

Take a look! – A glimpse of the electrified underworld
During the tender phase of the construction project, illiz architektur of Zurich and Vienna developed the concept of a “peep box” – a building modelled on the 18th century boxes that were used to give observers a glimpse of strange and unfamiliar worlds through their viewing windows. The 12-metre high, subterranean switchgear room rises as an illuminated box a few metres above the ground so that passers-by can peer into the depths of its interior and into the “belly” of the structure, where the 150kV high-voltage switchgear rests at its heart. 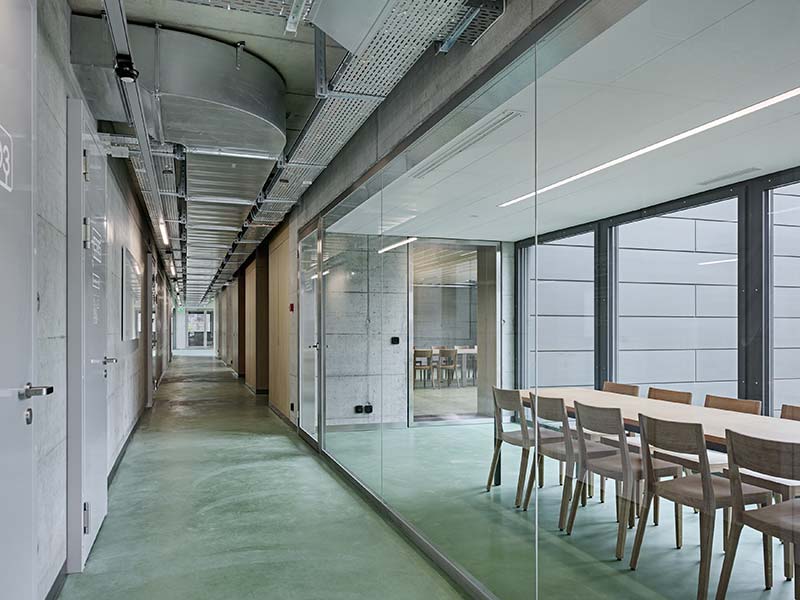 Architecture unites with technology and art
An art and construction project by Swiss artist Yves Netzhammer stages the space by disguising the walls delimiting the peep box with a multimedia mirror installation (“Der gefangene Floh“ or “The Imprisoned Flea“), in which observer and facility seemingly merge into an endless mirrored scene.
Between the main entrance and peep box, an underground exhibition route spans the transformers and duct blocks. After descending to the depths, visitors stroll along a green and diffusely illuminated 8-metre high transformer walkway, whose massive, perforated concrete walls provide a view into transformer cells and control rooms – accompanied by a persistent, yet discreet, buzzing. 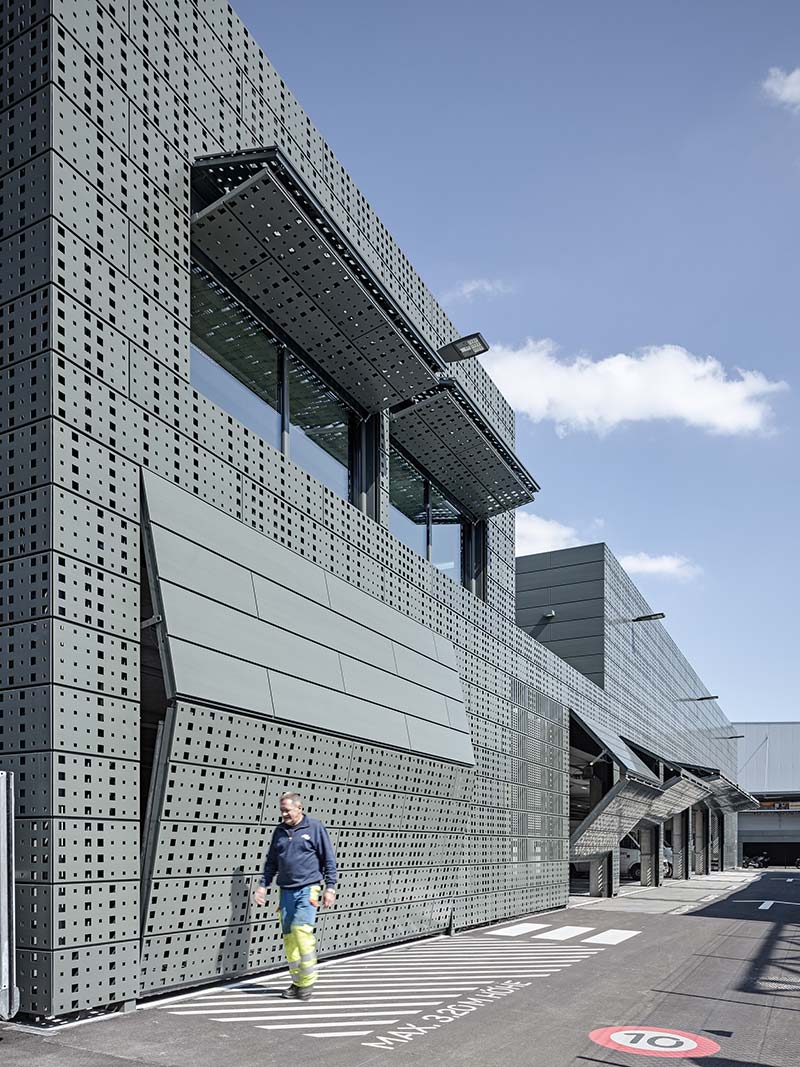 The “peepholes” into this technological world are spread over the wall surfaces like a swarm of bees accompanying the visitors on their path through the substation. From the main entrance – which is flooded with natural light– down the stairwell and over the transformer gallery, visitors are constantly greeted with new perspectives of the various rooms of the electro-technical facility.
To ensure visitor and worker safety, the entrances to the rooms were designed in clear colour schemes predefined by ewz. Serving as the background for the signal colours of red and orange, a shade of green painted on all the exposed concrete surfaces of the substation immerses the interior in an other-worldly, almost unreal, atmosphere. 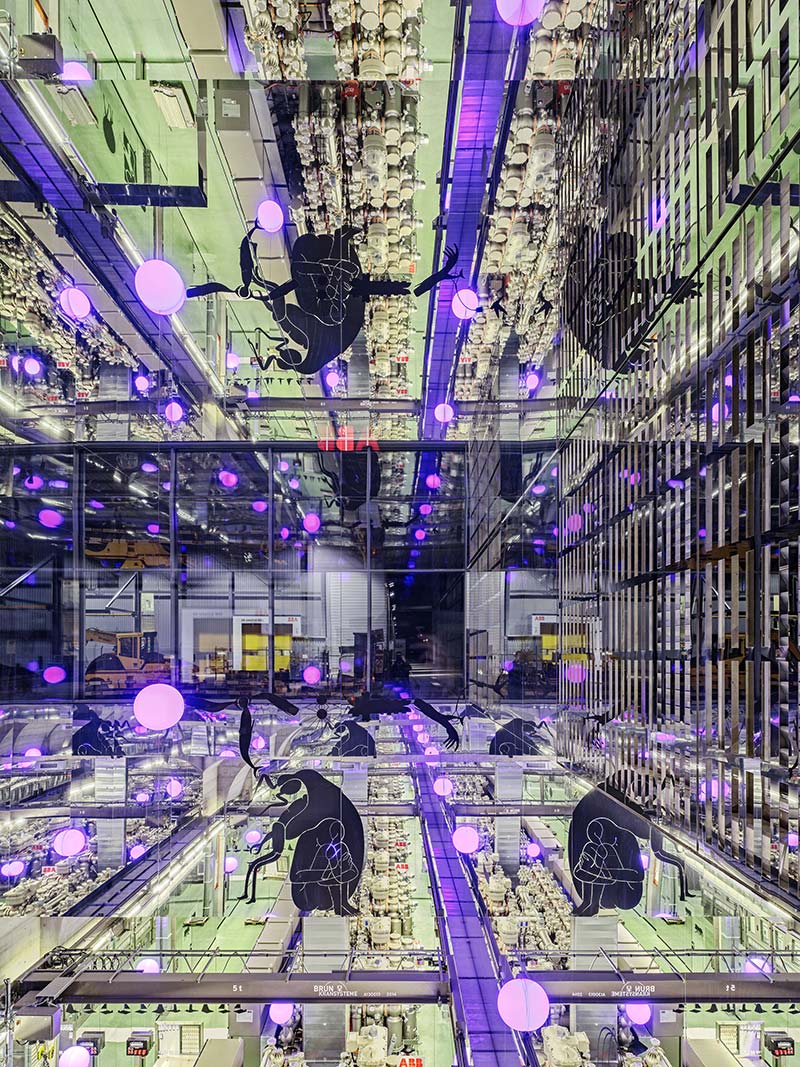 ewz toolbox moves to the rhythm of the city
A two-storey maintenance depot sitting atop the substation serves as a support base for ewz technicians during installation and service work on the city’s electricity distribution network. At night, the network support base appears as a sealed, dark monolith. As the workday begins, however, the building folds open like a huge toolbox. Large sections of the slate grey, zinc façade fold out of the building envelope, thereby extending the working area of the base into its surroundings.

Horizontal folding elements form large gateways through which the carpark can be reached from the ground floor. Above ground, the same elements shield the offices of the network support base from the sun. The flowing movement of the shutters gives the building an impression of preparing for the rhythm of daily routines, while offering city inhabitants a view of the work going on in and around the base. A continuous, iridescent lace pattern running over the gates, windows and closed surfaces of the façade defines the entire building envelope: The perforated, patinated zinc sheet coffers even cover ventilation units and safety equipment, which penetrate from the substation to the surface. The functions hidden behind the envelope are only visible once the “toolbox” has been opened at the beginning of the day. 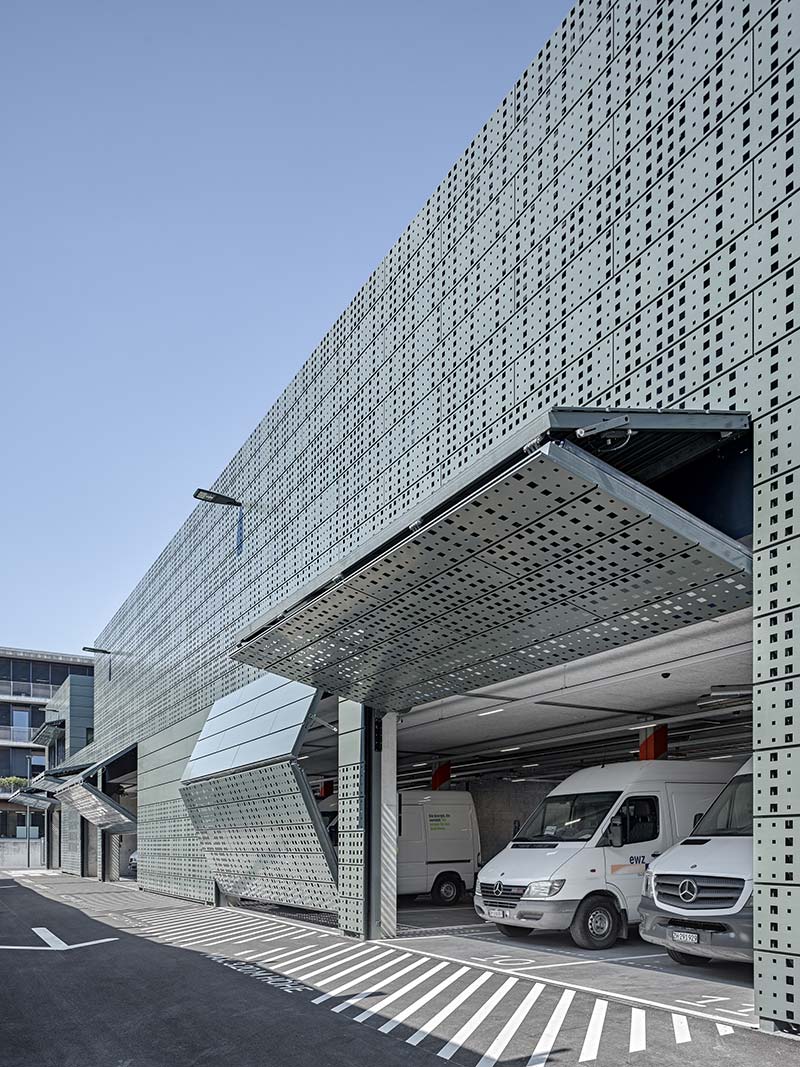 Only the wide span of the windows of the main entrance and the peep box break through the dark shell of the building, easily distinguishable from its massive, green-coloured concrete frame. The entry is the start and peep box the goal of the underground exhibition path. At the surface, they form striking counterparts that emerge from the restrained size of the structure.

Architectural challenges
A cross-functional design and planning team of engineers, architects, power experts, home technicians, graphic designers and an artist coordinated the processes in and around the building to meet safety requirements as well as to come up with possible access concepts. They had to strike a balance between the expectations of a fully-functional, fit for purpose structure and the spatial, atmospheric and artistic goals of the architecture. Close and productive collaboration allowed the team to also design components that would rarely come into play under “normal” design circumstances: Technical equipment, such as cable duct blocks, crane and rail systems and electro-technical building services, was included in the design concept, thereby forming a formal unity with the architecture.

In excess-driven Miami, design gurus should take a few lessons from nature