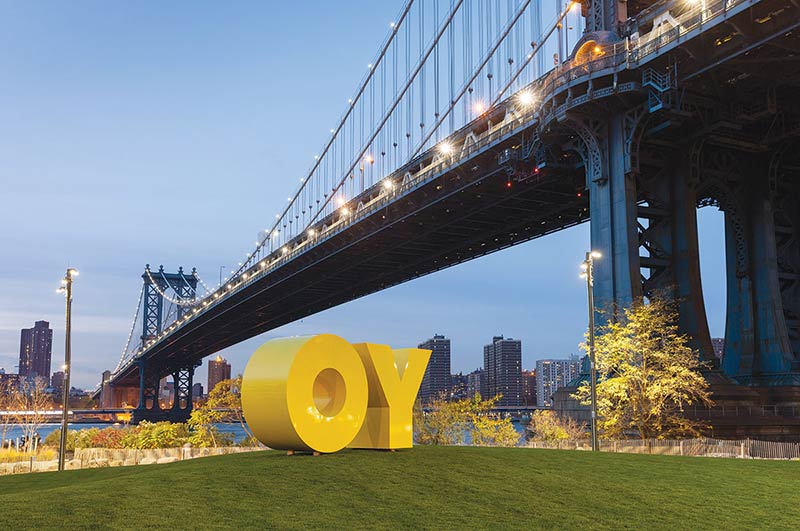 There in the little park between and in the shadows of the Brooklyn and Manhattan bridges, Deborah Kass’s large, Lik-M-Aid–yellow sculpture OY/YO lands right in that magnificent sweet spot — endlessly majestic, riddled with Whitman, Hart Crane, and the American Dream. The sculpture speaks in wonderfully multicultural tongues — a cuter new combination of Robert Indiana’s iconic LOVE and I ♥ NY. You can feel the frisson triggered in the mind when reading the word YO from Manhattan; and maybe you realize, instantaneously, that the word flips into OY when seen from Brooklyn — a simple two-liner joining east and west and spinning like a cosmic compass. And just like that, you’re in New York, hearing America singing in all its argots and colloquialisms. Just as you think, How’d I never notice that before? the mind supplies the sculpture’s invisible exclamation point.

It is such a simple joy to feel the real rhythms of the city and see this perfect public sculpture, especially in an age when public space seems more and more turned by developers into private arcades for the privileged.

I hate this historical turn, which for me is contained most neatly in the High Line, that stretch of elevated rail lines strung through the Meatpacking District, West Chelsea, and the Hudson Yards, refurbished with private money a dozen years ago as the spine of the massive luxury redevelopment of each of those neighborhoods. The trend I mean is this: toward ersatz, privatized public spaces built by developers; sterile, user-friendly, cleansed adult playgrounds with generic environments that produce the innocuous stupor of elevator music; inane urban utopias with promenades, perches, pleasant embellishments, rest stops, refreshments, and compliance codes.

And yet, as an art critic, I have to admit, from Rashid Johnson’s vexing yellow sculpture that looks like a prison and a butter factory to Adrián Villar Rojas’s cast cement modern Mayan “ruins” on the High Line to Kara Walker’s magnificent sphinx from last summer to that sweet Deborah Kass sculpture (both commissioned by the Brooklyn megadeveloper Two Trees), this semi-privatization of public space has produced some of the best public art the city has seen in decades — in fact, it may even have cracked the seemingly impossible task of staging good public art. How? By handing the job of curating it to an autonomous art-world insider rather than a public panel of judges, politicians, bureaucrats, architects, or businesspeople. […]

The Life and Death of an Impossible City

January 21, 2016
0
The interiors, designed by Kevin Roche John Dinkeloo and Associates, and completed in 1975 and 1983, respectively, are spectacular luxurious rooms