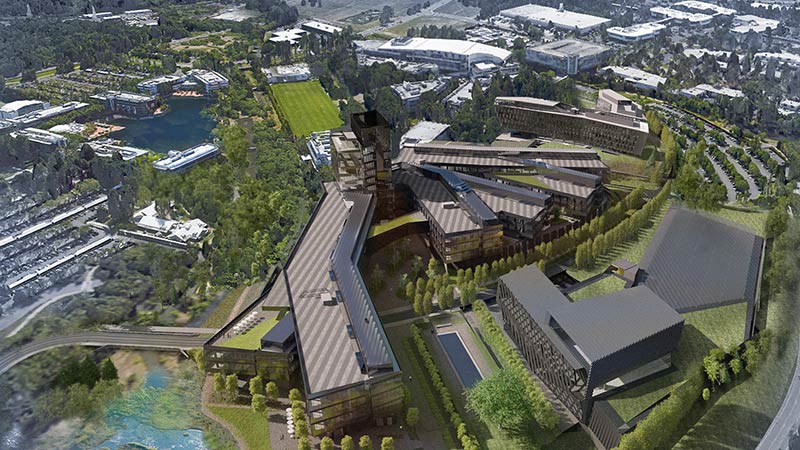 At Nike World Headquarters, near Beaverton, Oregon, breakthrough product is designed and developed for the world’s best athletes. This stems from a constant drive to imagine, invent and deliver the future of sport — a mission facilitated by workspaces that support rapid iteration and creation through collaboration. This allows Nike to scale its innovation to all athletes. In the spirit of accelerating this process, Nike unveils the design for expansion of its World Headquarters.

This phase is merely the latest chapter in campus development, which began in 1990 when Nike World Headquarters opened at One Bowerman Drive on land purchased in 1984. Two years later, the completion of the Nolan Ryan Building marked the company’s first site extension, while a third wave of construction, completed in 2001, doubled its footprint. Incremental development of both buildings and land has remained constant over much of the last decade.

The new structures reinforce the original campus master plan and link to preexisting areas through open green spaces, paths, sports courts and fields, and are positioned for fluid future growth. The architecture itself takes inspiration from human movement, speed and the strength and energy of competition, all central to Nike’s core mission. A beacon serves as a campus center while spanning structures radiating from the tower pay homage to Nike’s namesake, the winged goddess of victory.

The buildings’ organic extensions into the landscape and connected interiors represent the collective power of teamwork and creativity. Additionally, the building designs aim for LEED Platinum Certification. Some of the sustainable aspects include natural daylighting, passive chilled beams — a radiant convection system designed to heat or cool large buildings — and a closed-looped grey water treatment center.

With every expansion, Nike fuels the collaborative spirit inherent and essential to sport, innovation and, thus, the company’s growth, while simultaneously respecting its surroundings. This tradition will continue with the new campus expansion and can also be seen worldwide in recent Nike builds, including Converse’s offices in Boston, Nike’s Greater China Headquarters in Shanghai and the company’s workspace in Milan. Each promotes movement and encourages fluid teamwork through inventive, flexible spaces.

Improving with age? How city design is adapting to older populations

Watts made its mark on Frank Gehry, now the architect is...

September 14, 2015
1
Frank Gehry is working on his first project in Watts: an expansive new campus for the social services organization Children’s Institute Inc.