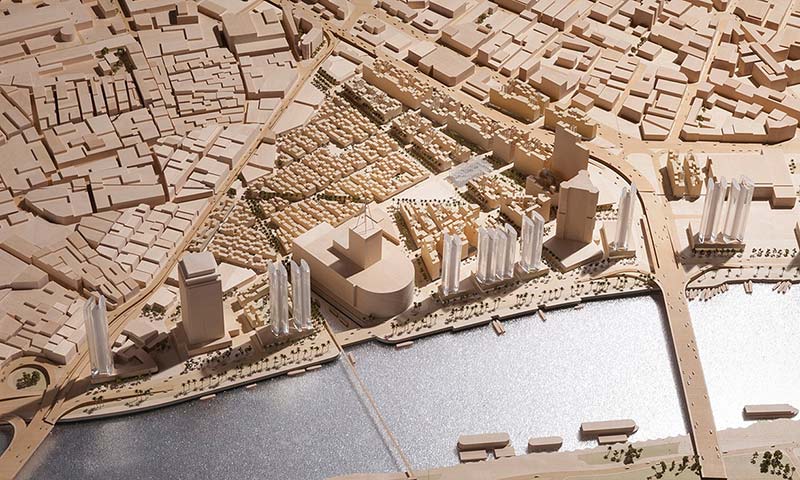 Glass towers, modernist boulevards and elegant roof gardens … Can Foster + Partners’ vision for Cairo’s Maspero Triangle avoid the controversies of Egypt’s past megaprojects, and encourage a new era of urban design – and democracy?

A stone’s throw from the River Nile, nestled deep within a labyrinthine tangle of narrow alleyways, bustling coffee shops and peeling paintwork, Tarek is staring at a phone. The images on the screen depict a sleek, modernist boulevard overlooked by a row of glass skyscrapers. Roof gardens crown each building, and on one balcony, a lone, elderly Egyptian man is playing chess and pouring tea.

Each rendering has been produced by Foster + Partners, Britain’s most prestigious architecture firm which has just won a competition to redesign an iconic district in central Cairo, vowing to “set the benchmark for urban regeneration throughout the country”. As part of its plans, the street on which Tarek is standing will eventually become a lagoon, lined with “cafés, restaurants and shops that will make this a highly desirable leisure destination.”

But Tarek – a middle-aged street vendor who requested that the Guardian not use his real name – is perturbed. He looks down at the glossy graphics, and then up again, before gesturing around at his neighbours. “Where are we in this picture?” he asks.

Tarek’s question cuts to the heart of the debate over urban development in Egypt, a battleground that is intimately entwined with the past half-decade’s revolutionary turmoil and is now assuming intense political relevance again. His neighbourhood is on the frontline of a struggle between two competing models of change, and the outcome promises to reveal much about the intentions of Egypt’s latest authoritarian rulers.

Norman Foster’s practice has chosen to partner with a government widely condemned by international human rights groups for its brutal crackdowns on dissent and widespread use of torture; in return, the company seems to believe it can carve out a place for itself in the vanguard of a progressive new era of urban design – one that could reshape the Arab world’s most populous nation for the better. Is it right? […]

June 15, 2015
0
CIAT is looking to establish itself in the Middle East to provide an overall voice for the design and build industry