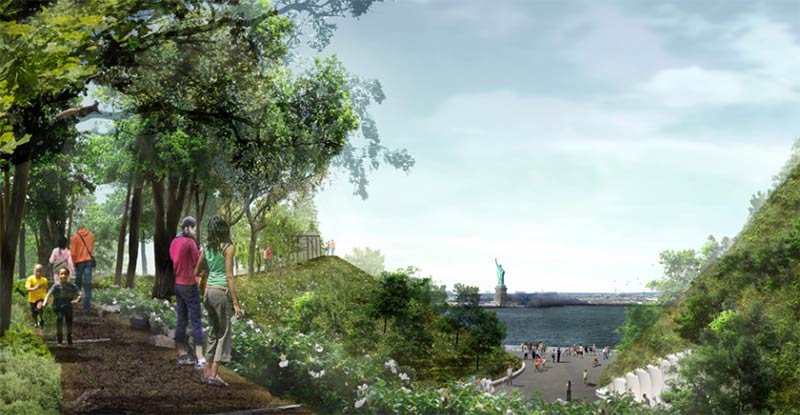 This year, the most striking addition to New York City’s skyline may not be high-rises but rather hills, as the city’s newest park opens on Governors Island.

The Hills on Governors Island will welcome visitors this summer — nearly a year ahead of schedule, it was announced last week — and add 10 acres of green space to the city, largely in the form of four artificial hills. Made of recycled construction debris and clean fill, the hills rise as high as 70 feet above the island, providing views of the Statue of Liberty, downtown Manhattan, Brooklyn and the New York Harbor. An unseasonably warm fall contributed to faster-than-expected construction times.

Slide Hill features four slides, one of which, at 40 feet tall, is the longest in the city. Discovery Hill will be home to a permanent site-specific sculpture by artist Rachel Whiteread. With the park’s completion, the popular Picnic Point and a 2.2-mile-long promenade around the island’s perimeter will also reopen to the public.

The Hills represents the culmination of the Governors Island Park and Public Space Master Plan, which, led by landscape architects West 8, has been transforming the once-inaccessible island into a recreation destination for the past 10 years. […]