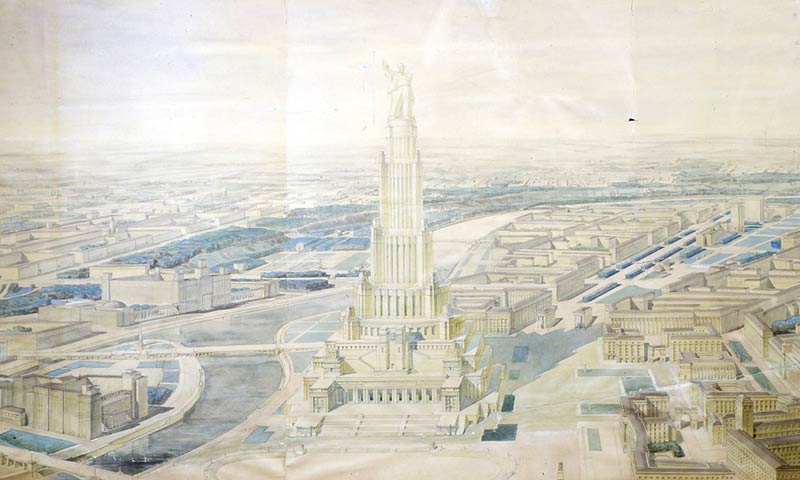 The exhibition, which marks the centenary of the Russian Revolution, focuses on six projects that were imagined by a bold new generation of architects and designers in the 1920s and 30s, but were never realised. Architectural drawings are supported by artwork, propaganda and publications from the period.

“The power of these buildings is in the fact that they were never built, so they live on in the imagination,” exhibition curator Eszter Steierhoffer said.

“It is a story that begins with great idealism, in people who are not just dreamers but trying to dream of a better world. But it becomes darker as the political situation changes towards totalitarianism – it is very sad, and a little scary.”

In the aftermath of the revolution, young architects and engineers – who were often also writers, artists and political activists – were ardent for change. They wanted to change the Moscow skyline, provide model housing for workers and end illiteracy. One poster reminded rail travellers: “Citizens – listen, take notice, there is a library in every train dining car.”

The exhibition includes a timetable for an ideal communal living complex with the day laid out in alarming detail. It includes eight hours at work, a surprising number of clothing changes – for lunch, again for an afternoon nap and yet again for tea – and four hours for “cultural amusements, exercises, possibly sauna and swimming”. […]

October 13, 2016
0
There are a handful of Frank Llyod Wright houses that can be rented. There is only one where you can sleep overnight for $148 ...