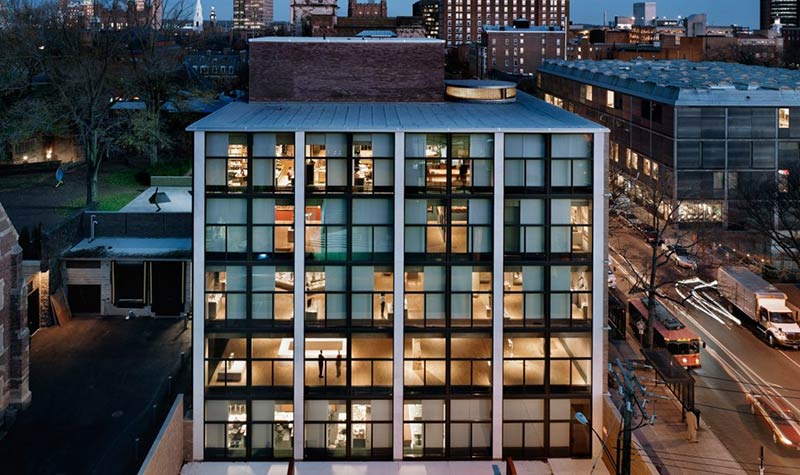 I have a distinct memory from my days as an architecture student at the University of California Berkeley in the late ‘80s. During an architectural survey class taught by Spiro Kostof, Louis I Kahn’s Yale University Art Gallery popped up in the slide show. “Nice building,” I thought, “but what’s with those windows?”

Fifteen years later at Polshek Partnership (now Ennead Architects), I would become the project architect for the construction phase overseeing the rehabilitation of that classic building—the most challenging aspect of which was to replace “those windows.” I came to understand, intimately, how the double-paned window wall had failed almost as soon as construction was complete. Condensation accumulated between the panes, creating the foggy effect that marred my first impression of this groundbreaking building.

It was Kahn’s first major commission and he was determined to make an idealistic statement. Indeed one could argue that that was the essence of modernism—to create singular works of art, even when the design pushed the architecture beyond its technological boundaries. While architects appreciated the importance of Kahn’s achievement, the failure of the glass window wall and “years of callous alterations” (as the New York Times put it) contributed to a generalized sentiment about modernist architecture that persists to this day: not all significant buildings are worth saving.

And yet at a time when the usefulness of these buildings was in doubt, more so than even today, Yale made a commitment to not only rehabilitate it but also seamlessly integrate it into a larger three-phase, $135-million project that reconfigured the entire Yale University Art Gallery, a process that would take almost 20 years to complete. For the other two wings, built in 1866 and 1928, the importance of treating those buildings with the utmost of care and reverence was not an argument anyone had to make. Rehabilitating the Kahn gallery was not a given at the time, but ten years after reopening, it has become known as one of the most significant efforts to conserve modernist architecture that is, even now, a rare achievement.

On the occasion of the ten-year anniversary of the Kahn gallery rehabilitation (the other two buildings were completed in 2012), I decided to take a look back at the lessons learned from restoring a modernist classic, as well as a look forward at the ongoing need for modernist preservation […]

Hungarian Leader’s ‘Edifice Complex’ Has Some in Budapest Rattled

February 24, 2014
0
The project's idea was to bring light into surrounding locality and create an iconic, easy to remember and original building