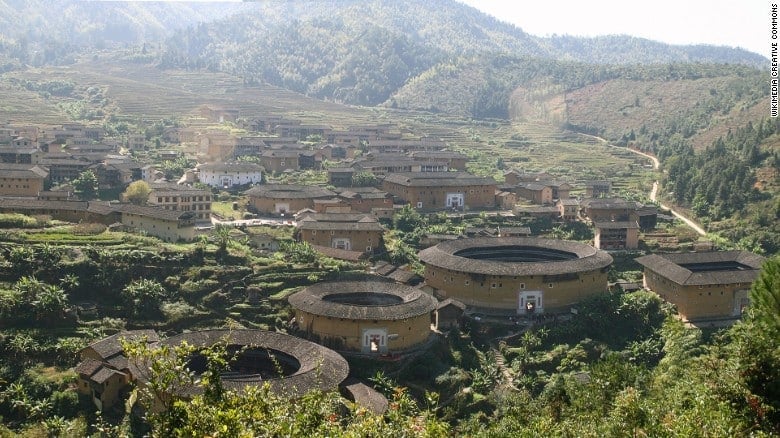 Looking like a design amalgamation of a Roman coliseum and a doughnut, tulou buildings, found in China’s southwest Fujian province, are some of the most stunning historic structures in the country.

But many of these residential buildings, which feature a courtyard surrounded by a perimeter of homes that rise several stories high, are under threat.

Although 46 of the largest and most important tulou have been listed by UNESCO as World Heritage sites, an estimated 3,000 remain in the province with no such status.

Many of these tulou are nearly empty and are falling into disrepair, with homes abandoned as residents leave for economic opportunity in the cities.

UNESCO describes the tulou it protects as “exceptional examples of a building tradition and function exemplifying a particular type of communal living.”

UNESCO points out that tulou design was ideal for defense purposes as well as encouraging communal lifestyles. The organization says that, “Housing a whole clan, the houses functioned as village units and were known as ‘a little kingdom for the family’ or ‘bustling small city’.”

Lin Lusheng, who grew up in a tulou named Taoshu Building in Fujian’s Neilong village, agrees with this sentiment. He has been on a mission to shine new light on the intriguing design of these often neglected buildings.

The 34-year-old started the “Hao Cuobian” project — the phrase means “good neighbor” in a dialect spoken by his Hokkien ancestors — and since 2015 he has spent money he raised through the project on renovating Taoshu Building, and educate its remaining residents about their heritage. […]

Who will win the battle over the L.A. river

An economic defense of old buildings

May 22, 2014
0
Jane Jacobs, a woman akin to the patron saint of urban planners, first argued 50 years ago that healthy neighborhoods need old buildings.