Offering the most advanced technology, the Slover Library designed by Newman Architects redefines how a public library is used, providing a civic space for creativity, collaboration, and research.

A combined public and private endeavor, the $65 million building was made possible by a $40 million gift from Frank and Jane Batten and a $21 million contribution from the City of Norfolk. The project led to the creation of the Slover Foundation, which contributed an additional $4 million to the initial construction. The library is named in honor of Colonel Samuel L. Slover, a former Mayor of Norfolk and uncle of Frank Batten, Sr.

“Newman Architects’ design melds three generations of architectural styles into one beautifully appointed building,” said Norfolk Mayor Paul D. Fraim. “Not only will Slover engage and delight the public, but it represents Norfolk’s history as well as its future.” 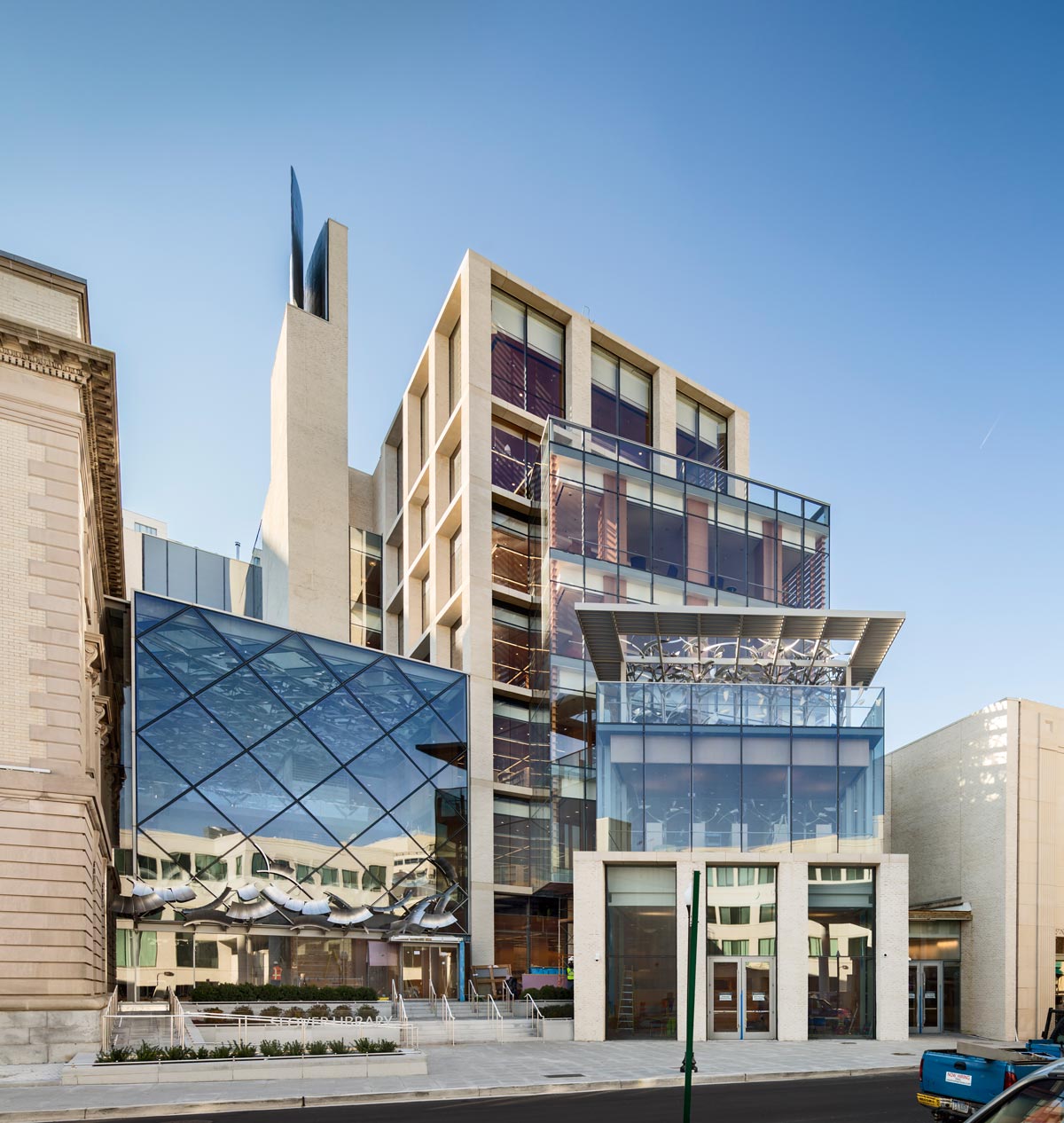 Under the guidance of Ray Gindroz and Urban Design Associates, Norfolk has aggressively engaged in rebuilding its downtown since the 1990s. The City has built new infrastructure and vibrant mixed-use developments as well as a new light rail system. Slover Library was conceived as the anchor of a new downtown district adjacent to the MacArthur rail station. Blending the best of contemporary library resources and services with new and innovative space design, Slover will be a vital location for early literacy, community learning, leading-edge information technology, and civic engagement. 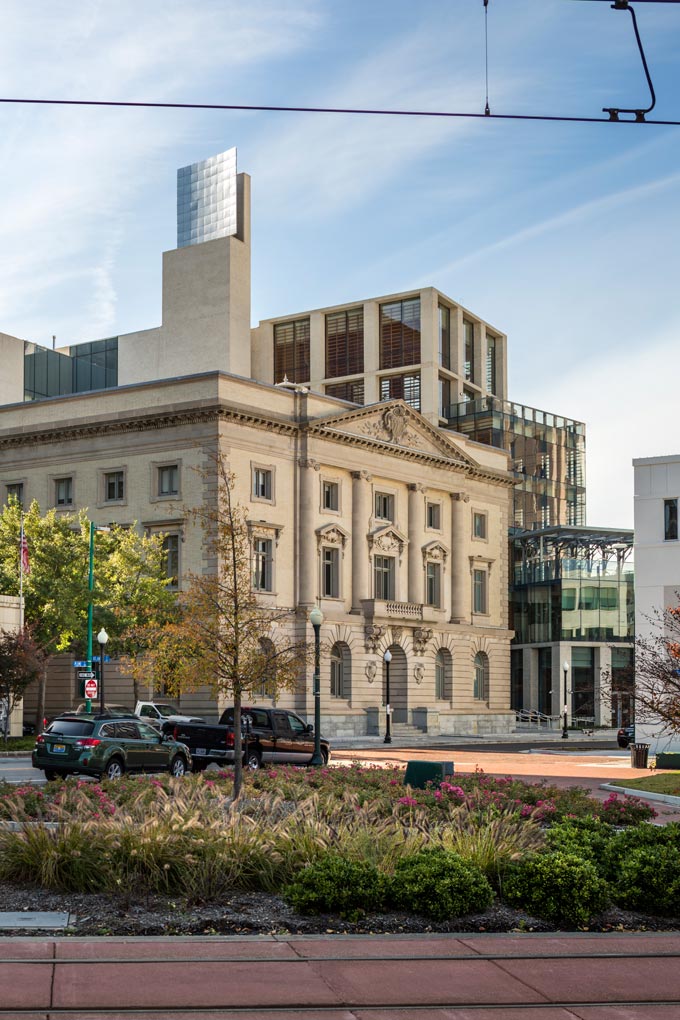 The building we call Seaboard opened in December 1900 as a post office and federal courthouse. When the current Hoffman Courthouse opened on Granby at Brambleton in 1934, this building became Norfolk City Hall, and remained so until the mid-60s when the current City Hall opened. It housed Norfolk Social Services until the early 1970s, and then was in private hands until the City of Norfolk purchased it in 2007. 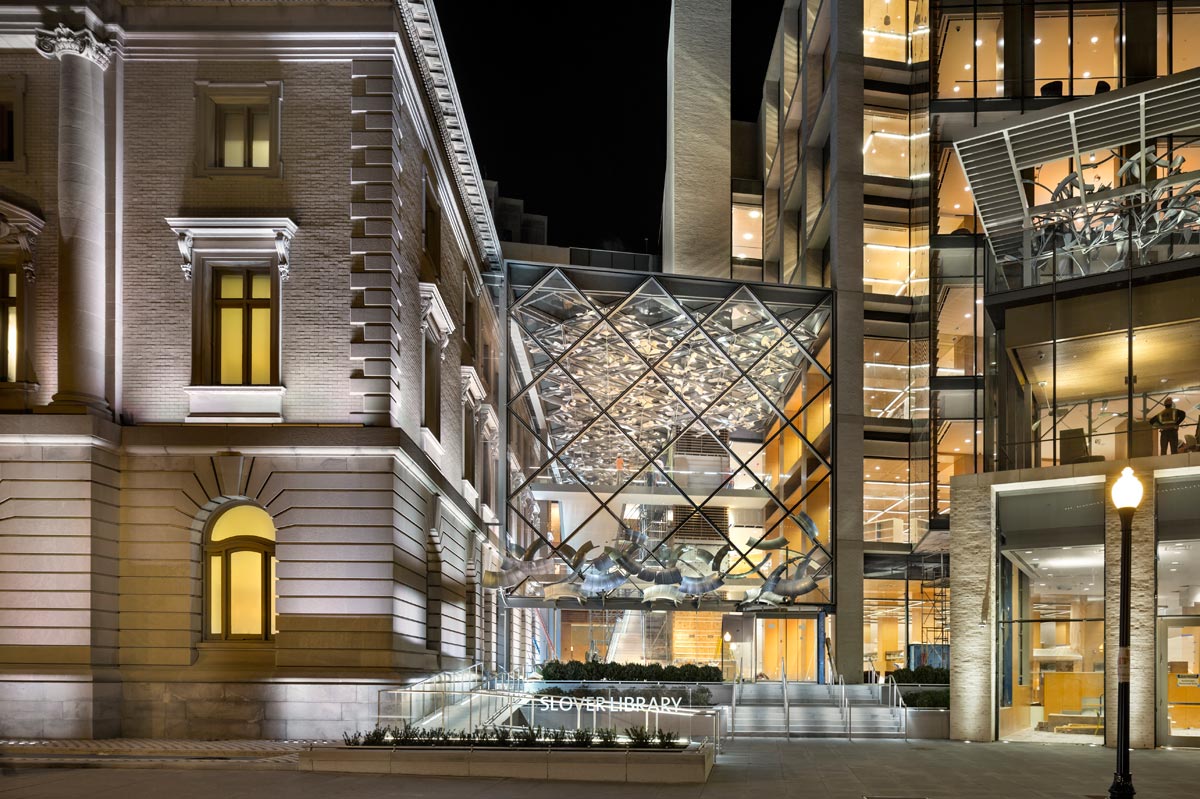 Slover Library Blends The Old And The New

The new Slover Library is a restoration of the 115-year-old Seaboard building, a new seven-story glass walled addition, and a renovation of an adjacent commercial building, the Selden Arcade. The Seaboard’s interior cortile, a central court surrounded by an arcade and a ring of enclosed rooms, is mirrored in the design of the glass addition. The western wall of the Seaboard has been opened to the new space, making its interior accessible to library patrons, while remaining visually connected to the outdoors through the new addition. Natural light weaves through the material of the new building to unite an interior public realm with the outdoor public realm of the city. The new Slover Library embodies the principal roles of today’s library: as a storehouse for the region’s history and artifacts, as a portal to digital access, and as a community gathering place. 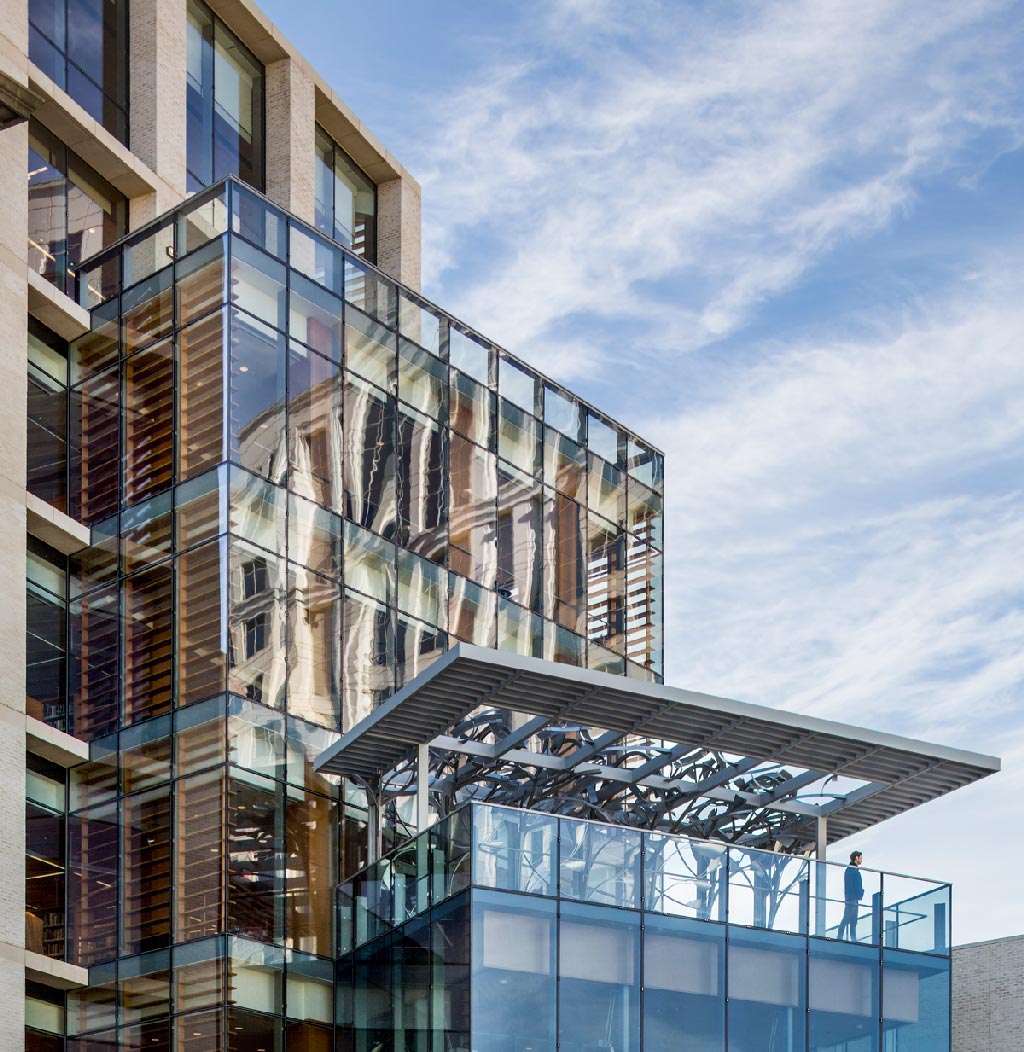 Slover Library reflects a relationship between the old and new: the solidity of the restored masonry Seaboard and a transparent and inviting addition. The spaces are structured to link to each other through the Forum, a three-story atrium at its center. Visitors can see the library contents upon entering the building and elect to explore the collection and engage in the programs. The library is a series of spaces and activities displayed off this central space. A hub for exchange and interchange, Slover Library is a town in miniature, with the Forum serving as its town square.

As one approaches Slover Library from the MacArthur Station, the new addition emerges from behind the Seaboard, its incremental ascending building blocks culminate at the top with a sculpture suggesting an opening book. 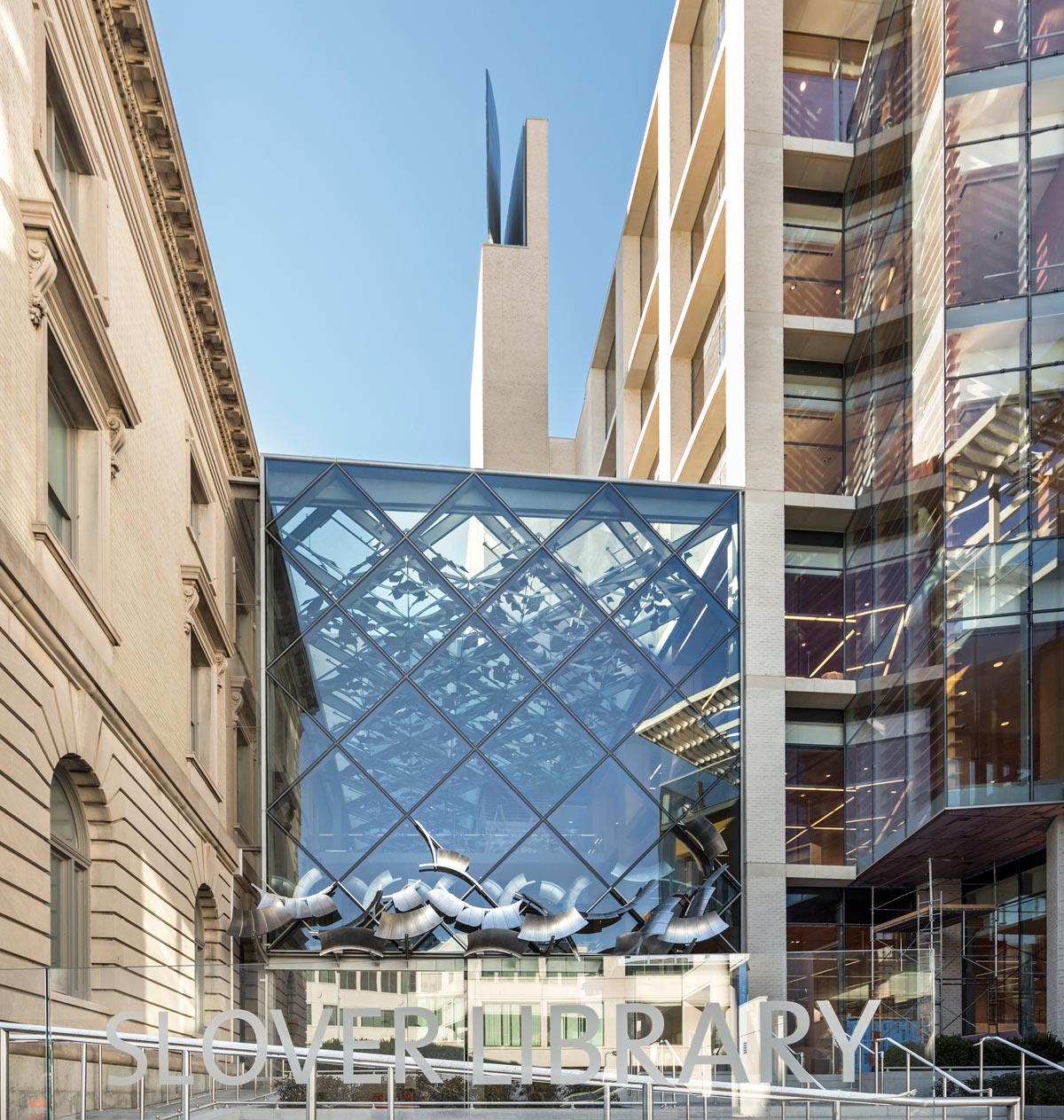 “The 21st century public library has to adapt to the age of e-books and online content. No longer is it defined as a repository of books, but more as a community anchor to encourage civic engagement. We designed Slover Library to respond to the growth of Norfolk and to create a space that welcomes all of its residents, and learners of all ages,” said Herbert S. Newman. 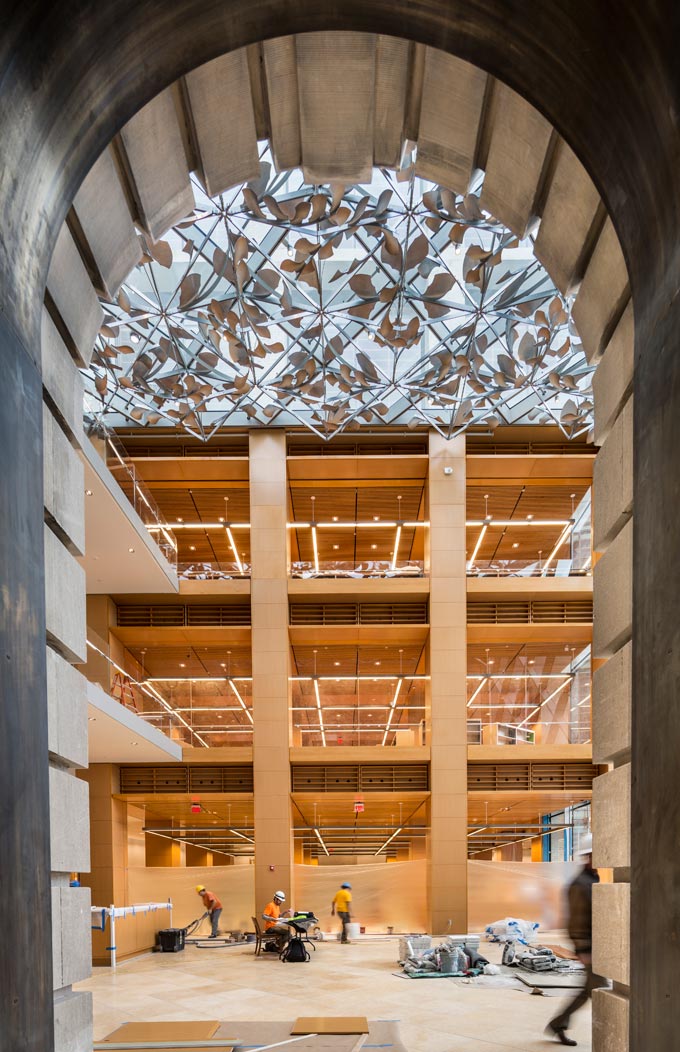 A Library For The 21st Century

“This library is our village green,” said Harry Lester, president of Slover Library Foundation. “The Slover will be an exceptional place. One that encourages community engagement, a place to convene thoughtful conversations on issues important to our region and beyond. Right now our job is to share ideas on how to engage the public and welcome everyone in the region to this amazing, world-class library.” 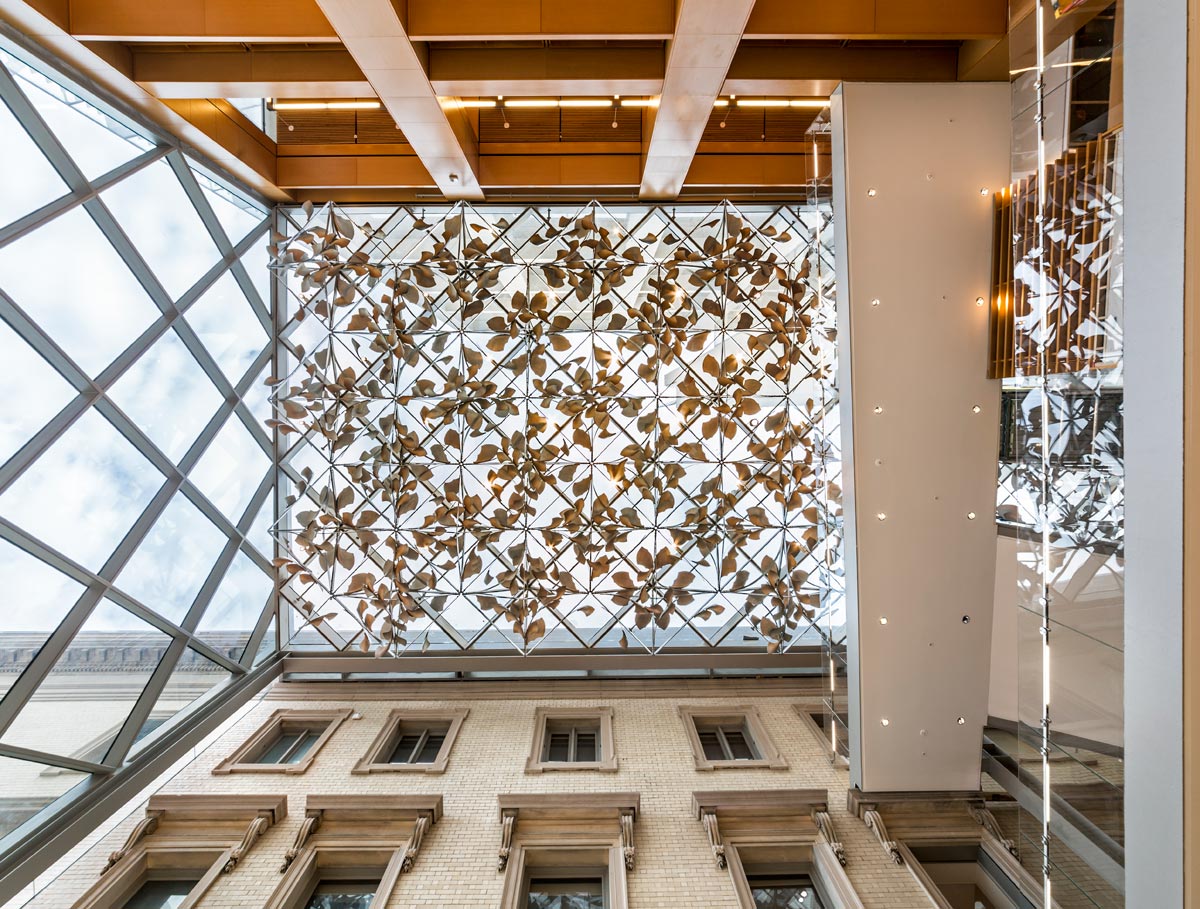 The Sargeant Memorial Collection (SMC) is a rich archive of regional history and genealogy. Its holdings include some of the very first documents after the European settlement in the new world. The Seaboard building, where the SMC resides, has been renovated with state-of-the-art archive spaces for the gathering and preservation of this rare resource. The upper level of the Seaboard is the site of a new digital interface to access the SMC. Built as a custom software application, the room is filled with wall-sized touch panels to facilitate the interactive search and exploration of the SMC’s holdings. 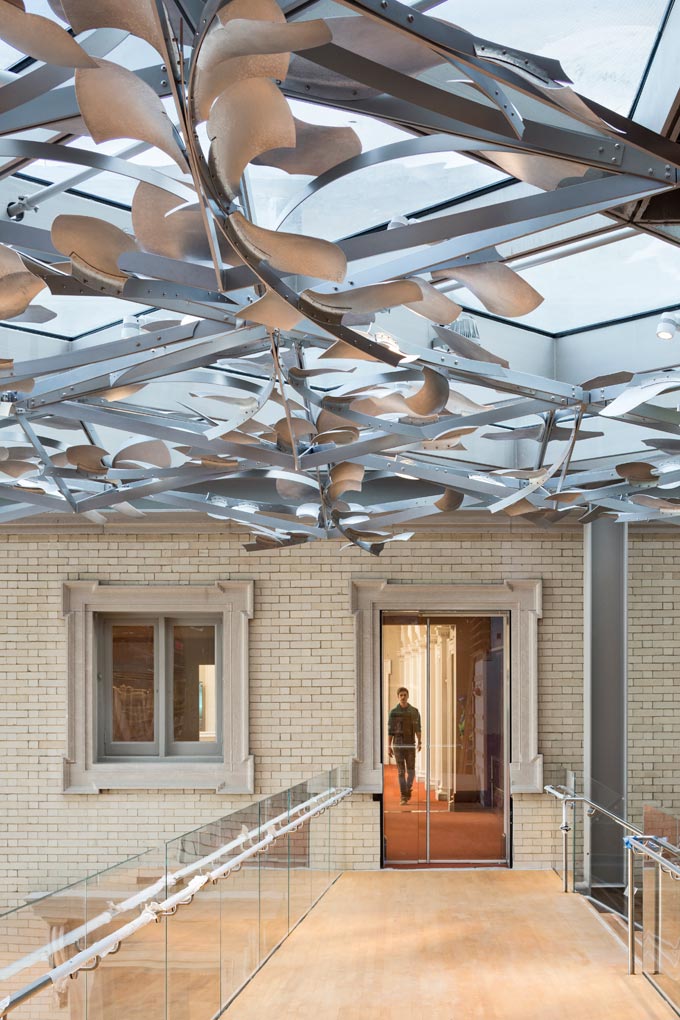 From the project’s inception, Newman Architects worked with New Haven-based sculptor Kent Bloomer to develop a system of ornament that is an integral, organic part of the architectural whole. Bloomer’s ornament amplifies three distinct points of the building: the ceiling of the Forum, the front entrance, and the third floor terrace of the loggia. The Forum, with its distinctive leafy aluminum canopy, reinforces the main entry and lobby as a place of connection. The foliation of the ceiling is comprised of over 1,000 elements die stamped and hand-hammered into an abstract botanical form. The abstract leafage is picked up again on the loggia, which serves as an accessible outdoor porch for the public. The ornament on the façade of the entrance departs from the botanical schematic. The forms themselves, while abstract, are reminiscent of the shapes of a sail. They bring the diagonal entrance wall alive, creating a wave action that connects the Seaboard to the new structure.

August 17, 2012
0
Located on the outskirts of a small settlement in the South of Austria’s Burgenland region, L-House is surrounded by the brilliance of natural light.