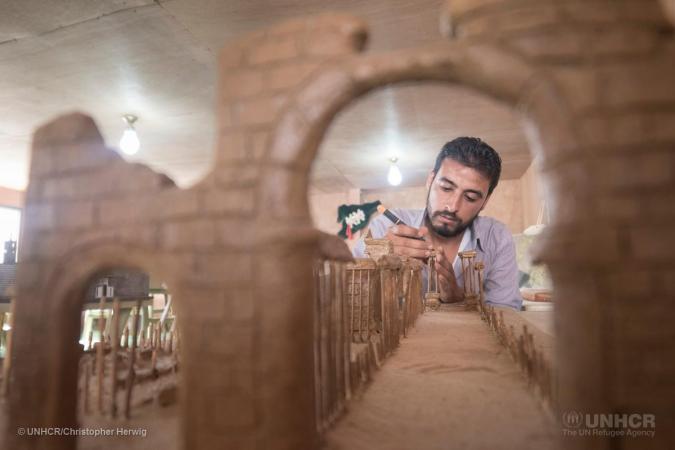 Behind the curtain of the Jordanian desert, Syria’s bygone historical monuments can be spied.

A group of six amateur artists living in the heart of Jordan’s Za’atari refugee camp, host to nearly 80,000 Syrians, has worked together to recreate famous landmarks, which once stood proudly in the western Asian country, in dedication to its long and rich history.

Using the most basic of materials, a relatively inexperienced bunch of artists, sculptors and painters decided to reinstall Syria’s cultural heritage by building models of landmarks including the ancient city of Palmyra—currently under siege by a Russian bombing campaign to force out militant group the Islamic State (ISIS)—and the Krak des Chevaliers castle in Homs.

Syrian national Ahmad Hariri, the driving force behind the project, set up the initiative to educate the next generation about its homeland. Speaking to the U.N. Refugee Agency (UNHCR) on Monday, Hariri said: “There are lots of kids living here who have never seen Syria or who have no memory of it. They know more about Jordan than about their own country.” In a world described by UNHCR worker Charlie Dunmore, who regularly visits the Za’atari camp, as “organized chaos,” approximately 80 babies are born every day into its booming economy. […]

A Foreigner’s Guide to Polish Architecture

April 7, 2015
0
The accounts of Polish architecture are just as tumultuous and complex as the political fate of this part of Europe.