The Anatomy of a Building: “Sancaklar Mosque”

SGMStudio (Sarraf | Galeyan | Mekanik) has filmed a short documentary on EAA – Emre Arolat Architects’ Sancaklar Mosque -a building that stands out as one of the rare examples of modern architecture among Turkey‘s Islamic places of worship. SGMStudio’s “Sancaklar Mosque” premiered at Architecture Week Prague and will be on display until October 12th as part of EAA’s exhibition. Concurrently, the film will be available online.

Known for its works at the 1st Istanbul Design Biennial’s “Musibet” exhibition and cooperations with various NGO’s focusing on the built environment, creative media practice SGMStudio visualized the transformation of steel, concrete and stone into a place of worship in the “Sancaklar Mosque” film by following every step of the way, from the start of the mosque’s construction until its inauguration.

Sancaklar Mosque, commissioned by Sancaklar Foundation, is a distinguished example of modern architecture that stands out among Turkey’s Islamic places of worship dominated by historicist building typologies. In order to reflect and project the creation process of this unique piece of architecture, SGMStudio documented Sancaklar Mosque from the ground up for more than two years. 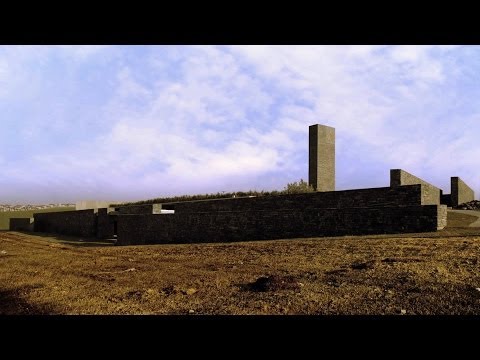 The Tuneful Tension of Natural and Manmade

SGMStudio team narrates the building’s architectural emphasis on “the tension between the natural and the artificial” via motion picture –a fairly unusual medium among the usual representations of architecture- and adopts the seasonal changes witnessed by the construction process as the back bone of the story.

“Sancaklar Mosque” depicts the transformation of the building from a framework to a place of worship, conveys the integration of the fascinating natural landscape of the project with the fluid, manmade landscaping, and introduces the building’s proud and graceful geometry through the agency of motion picture and documentation. The film visualizes the seasonal changes in activity and the organic transformation of the landscape, not as mere backdrops, but as aspects of the mosque’s formation.

SGMStudio aims to portray the building’s extraordinary and striking spatial sensation by enhancing the same sensibility visible in the structure within its narrative.

Technical Details of a 35 Day Shoot over 24 Months…

For “Sancaklar Mosque”, SGMStudio spent 35 shooting days spread over a period of 24 months. Due to the inaccessibility of the area during harsh winter times, the studio recreated the snowbound imagery of the construction with the help of photo manipulation, matte painting, 3D effects and compositing techniques.

By utilizing both sharp timelapse shots and soft videos of NTSC 30 footage conformed to cinematic 24 for its visual narrative, the film dwells on the tension between the technical and engineering-centric implementation and humble and tranquil art of building with its pacing.

The original score of the film is an integrated manifestation of both the modern silhouette and the Islamic references of the building. The musical piece combines classical music with the oriental ney, allowing the co-existence of the hectic beat of construction and the peaceful serenity of worship within one picture. For the musical composition, which steers the pace and feel of the film with the help of audio samples of natural phenomena, all of the instruments, including the ney, were mixed in a fully digital environment.

SGMStudio (Sarraf – Galeyan – Mekanik) was founded by Emine Seda Kayım, Erhun Erdoğan and Memduh Can Tanyeli in August 2012. Defining and creating an inter-disciplinary working field emerging from the individual areas of specialization among its partners, SGMStudio has drawn its path by designing and producing multimedia works for creative industries. The team’s professional endeavors focus on the nurturing intersection of practices in publishing and content production, film making and photography, and recording & composing.

Aline Chahine
Aline is an international licensed architect currently practicing in Canada, she is the reason you are reading this right now, Aline founded the platform back in 2008 shaping the very foundation of Architecture Lab, her exemplary content curation process that defines the online magazine today.