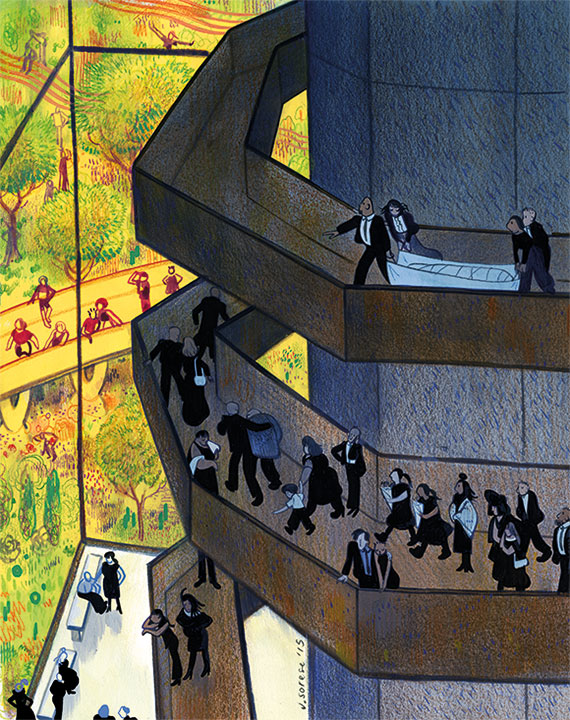 If you happen to die in North America, this is probably what will happen next: Someone will pause for a moment in front of your corpse and then make a phone call. They’ll call either a funeral home or a local government agency, depending on how much money you have. Some minutes later—I’ve never timed the interval, but in my experience it’s always at the crossroads of too soon and eternity—two people will show up in suits to take your body away. They will briskly shake hands with the living and say, “I’m sorry for your loss,” in a tone that indicates they’d like to be sorry for your loss, but this is what they do for work. To preserve a semblance of dignity, they might invite the living to step out of the room while they begin the awkward business of wrangling your body onto a board, strapping it down, and getting you out of there as quickly as possible.

After that, unless you’ve planned ahead for something exotic—donating your body to a university, burial at sea—you’re headed in one of two directions: a casket or a furnace.

The American dead, like American voters, fall roughly into two camps. In this rough analogy, the conventional burial industry is like the Republican Party: a lot of suits, a lot of money, lobbyists to protect their interests, and a general acceptance that cutting down trees (for caskets), pouring concrete (for vaults), and putting toxic chemicals underground (embalming fluids) are simply part of the American way. Cremationists are more like the Democratic Party: slightly looser dress code, still interested in profit margins but perhaps not as fanatically (there is a lot less money to be made from a $400 urn than a $3,000 casket), and a belief that they are on the progressive side of history.

Many funeral homes offer both burial and cremation services, to be fair, but they tend to emphasize one or the other, depending on the kind of business they run and what part of the country they’re in. The burial/cremation divide follows an uncanny red-state/blue-state pattern. According to the Cremation Association of North America, which collects and analyzes state and county data, cremation is far more popular in New England and on the West Coast (in 2013, Washington State had a cremation rate of 73.2 percent, the national average was 45.3 percent), while the top five states for conventional burial are Mississippi, Alabama, Kentucky, Louisiana, and West Virginia. ….

Why London is the most expensive city to build in

A treetop tour with Nowness of Ray Kappe’s Californian abode

Behind every crumbling downtown is a billionaire who wants to save...

October 23, 2014
0
“Come over and join us!” said the group of Detroiters at the end of the ballroom, hoisting their wineglasses. “We’re talking about billionaires who wreck cities!”