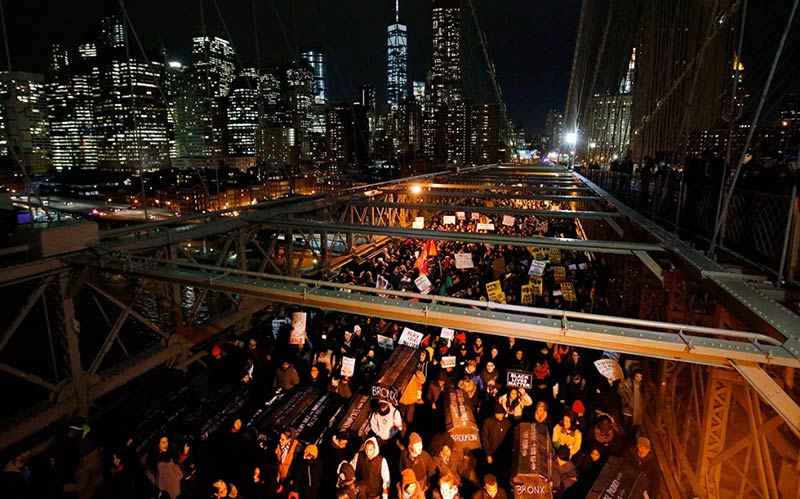 On Dec. 13, the largest of the recent waves of protests against racist, aggressive and militarized policing tactics — spurred by the failure to indict the officers who killed Michael Brown and Eric Garner — took place across the United States.

In what was dubbed the Millions March, tens of thousands of protesters took to the streets, with New York City and Washington, D.C., being hubs of activity. (Some estimates claim as many as 50,000 protesters in New York and 25,000 in Washington.) For pundits and reporters, the reasons for and actions during these demonstrations are a bountiful source for analysis and pontificating. Yet there’s a character in all these stories that is always present but is not often granted the attention it deserves: the cities.

More precisely, I mean what I call the architecture of dissent, the ways in which the physical structures and flows of a city directly affect the ability for people to gather, coordinate and maintain visible social movements.

New York City has been the focal point for recurrent demonstrations over the last couple of weeks, with large, long marches, die-ins and rallies. This is not surprising, since New York is the most populous city in the country. But even more than that, the urban environment — dense, centralized, vertical, walkable — creates spaces that are conducive for these protests to pick up steam. The existence of public spaces, such as Union Square and Washington Square Park, function as easily accessible rallying points. ….

How New Media May Save Modern Architecture

The Story of Toronto’s 90 Sumach

Design in Crisis: How Economic Bust Has Redefined the Value of...

April 15, 2015
0
An Italian design legend considers the positive effects that the world’s financial crisis has had on luxury design.