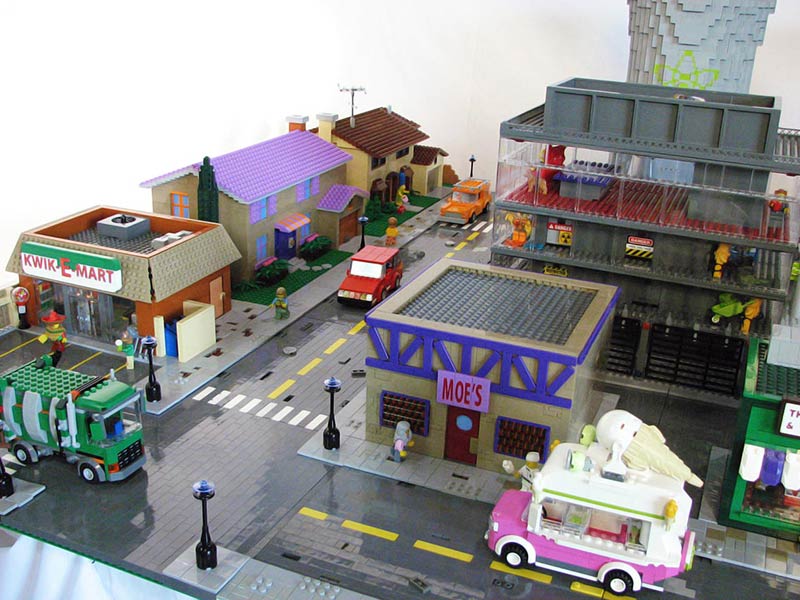 When Lego announced earlier this year that it would be releasing a series of Simpsons minifigures, most fans of the show (or of Legos) figured they’d just be putting Homer or Apu or Nelson Muntz in a generic brick-based environment, or recreating a scene from the Lego episode of the show, or maybe just sticking them on a keychain.

The 36-year-old graphic designer has been heavy into Lego design ever since the first Star Wars sets were released in 1999, and has been designing and building his own creations since 2004. He even made a massive Lego version of Futurama’s New New York last year, so taking on another Matt Groening animated show required no deliberation—”I knew I would have to build Springfield,” he says. And so he did. […] […]Of course, after 25 seasons, The Simpsons has featured more buildings than even this massive installation could include “The first thing I did was consider what the most memorable buildings of the town are,” says De Lanoy, who lives near Chicago. “I didn’t want to get too obscure, because when people see the layout I want them to be able to recognize the landmarks, even if they’re just casual fans.” He knew he wanted the whole layout to be 10 feet by five feet, and he was recycling the roads from his Futurama project, so he determined the footprints of the buildings based on those constants.

Landid and Brockton to make The Porter Building, Slough, one of the UK’s healthiest office buildings

Tale of the Tongs: the trailer

July 28, 2015
1
OMA has been chosen by Brighton College to design a new building that will accommodate its Sport and Sciences departments.