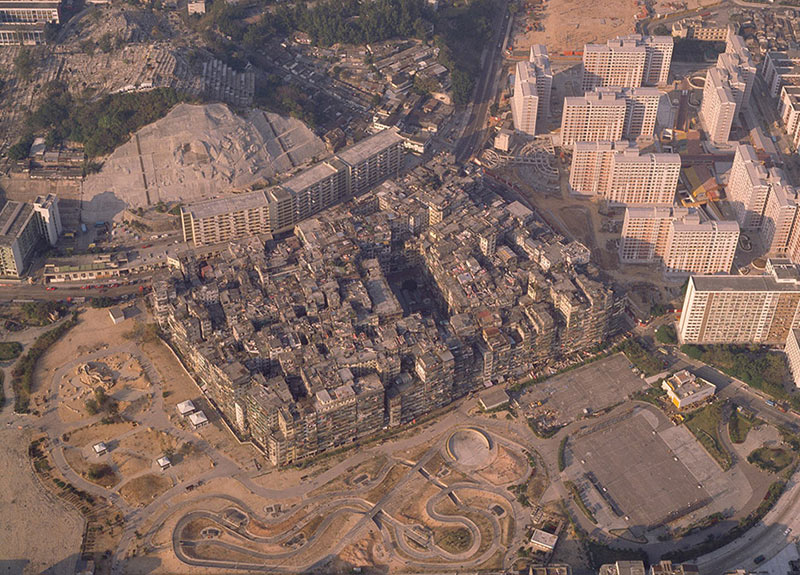 City of Darkness Revisited is a photo book and cultural history of Kowloon Walled City, a largely ungoverned, densely populated enclave within Hong Kong. Originally a military fort, the Walled City saw its population rise dramatically during the second World War. At times, it was an urban settlement; at other times it was controlled by organized crime. But it was always a unique architectural and social phenomenon. At its capacity, it housed approximately 33,000 people, stacked vertically in precarious-looking buildings in an area of less than a tenth of a square mile. Rumors of lawlessness in its interior ran rampant, but its hallways held a complex (and largely peaceful) system of people, businesses, and community resources. In addition to residencies, there were factories, shops, and even community health clinics: the Walled City took care of its own.

In 1993, the Hong Kong government officially slated Kowloon Walled City for demolition, and the eviction process began for its tens of thousands of residents. The city was fully demolished by 1994.

City of Darkness Revisited, by photographers Greg Girard and Ian Lambot, is a revamped version of a book they made in 1993. It serves as a record of life in a place of sensory overload.

How Oregon’s Second Largest City Vanished in a Day

Modern Houseboats in the Netherlands

September 27, 2018
0
How do we beat climate change? What’s the plan? We know about the problem. What are the solutions? How can you make a real...