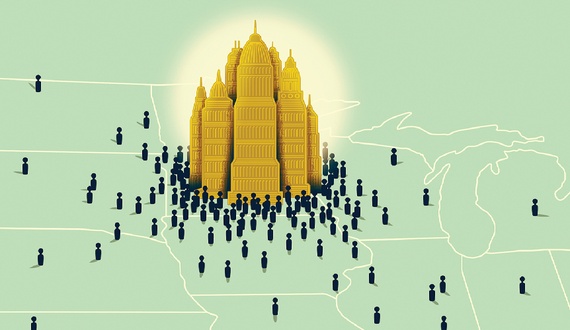 If the American dream has not quite shattered as the Millennial generation has come of age, it has certainly scattered. Living affordably and trying to climb higher than your parents did were once considered complementary ambitions. Today, young Americans increasingly have to choose one or the other—they can either settle in affordable but stagnant metros or live in economically vibrant cities whose housing prices eat much of their paychecks unless they hit it big.

The dissolution of the American dream isn’t just a feeling; it is an empirical observation. In 2014, economists at Harvard and Berkeley published a landmark study examining which cities have the highest intergenerational mobility—that is, the best odds that a child born into a low-income household will move up into the middle class or beyond. Among large cities, the top of the list was crowded with rich coastal metropolises, including San Francisco, San Jose, Los Angeles, San Diego, and New York City.

Last fall, Jed Kolko, the chief economist for the online real-estate marketplace Trulia, published a study of housing affordability, which looked at homeowners’ monthly payments in each city relative to the area’s median income. By Kolko’s measure, the 10 least affordable cities in the country included, predictably and dispiritingly, San Francisco, San Jose, Los Angeles, San Diego, and New York City. The most affordable were strewn through the Rust Belt and the Deep South, where people have become detached from the more dynamic parts of the economy. ….

May 3, 2015
0
Walking past barren, trash-strewn areas makes our heart rates jump. But green spaces calm us down