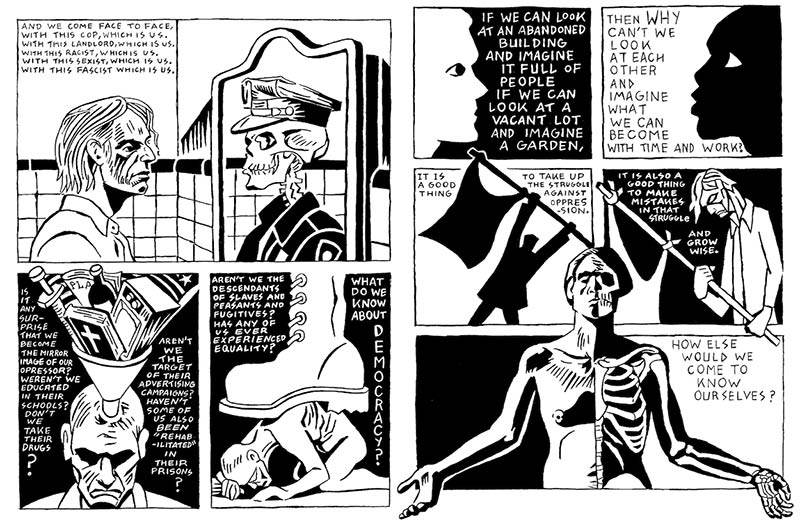 Today, some squats have even become institutions — a squatting museum, and limited-equity co-ops. So what does their history mean today, in a city whose density and housing market leave little room to maneuver? This was the question posed at UnionDocs in January. Amy Starecheski, oral historian, former squatter, and author of the recent book, Ours to Lose: When Squatters Become Homeowners in New York City, gathered a group who have been documenting the squatting movement from multiple perspectives, from firsthand experience to generational remove. Below, Amy guides us through some of the documents they have gathered and created: a graphic novel, a sketchbook with instructions for DIY electrical wiring, interviews, and installations tell a number of different stories about squats, and how people struggle to make space for themselves in the city.

New York City in the 1980s and ‘90s was home to a squatting movement unlike any other in the United States. Drawing on their diverse radical and progressive roots, squatters claimed and occupied city-owned abandoned building with a winning combination: a Yippie sense of drama and fun, punk rock aggression and subcultural grit, and urban homesteaders’s earnest appeals to American values of self-sufficiency and initiative. When faced with eviction, they learned how to build barricades and booby traps and drum up riots from their European counterparts, and each attempt to evict Lower East Side squatters from the late ‘80s on brought newly escalated police and squatter tactics. By the mid-1990s, the police were using tanks and helicopters, and the squatters were burning cars in the streets.

In 2002, after three years of secret negotiations, the city shocked everyone involved when it agreed to sell the remaining squatted buildings, for one dollar each, to a non-profit (UHAB – the Urban Homesteading Assistance Board) which would take out loans on the squatters’s behalf to renovate the buildings and bring them up to code. The former squats would then be converted to limited-equity low-income cooperatives, and the renovation loans would become mortgages. Illegal squatters would thus be transformed into indebted homeowners, problematic unsellable buildings into low-income housing. This was easier said than done: by 2013, only five of the eleven buildings in the legalization deal had been converted into co-ops. […]

March 18, 2015
0
Edge House is an attempt at designing a contemporary urban house in a mountain environment, where the local law requires traditional form