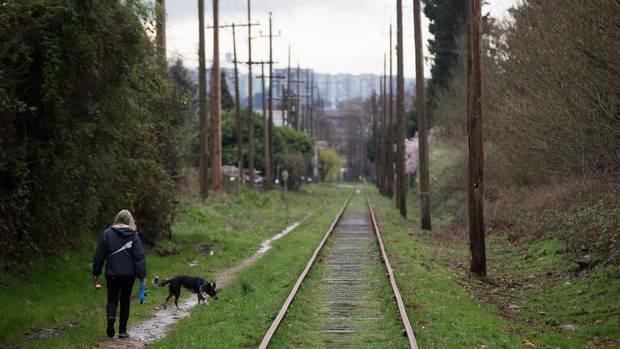 It was a bold move that required compromise, some deft negotiating and the will to bring a seemingly intractable and years-long dispute to an end.

And this week, the City of Vancouver and CP Rail did it – they hammered out an agreement that will see the city purchase the Arbutus Corridor lands for $55-million. That’s almost three times what the city said it was willing to pay for the nine kilometres of former railway right-of-way. It’s about half of what CP wanted to get for the land. Yes, it’s a lot of money but, put in perspective, the city picks up 42 acres of prime, west-side real estate for about $9-million less than Chip Wilson’s most recent assessment.

The city envisions transforming the corridor into a greenway for pedestrians and cyclists, with space preserved for an eventual light-rail line. Excess land would be sold off with the city and CP sharing the profits.

Vancouver Mayor Gregor Robertson called it “a once-in-a-lifetime opportunity,” and said it’s Vancouver’s chance to have its own New York-style High Line.

The High Line effect is well-documented: Major cities across the United States share a vision of creating similar linear parks – many on unused rail lands, some on elevated tracks. But replicating the success of the High Line is seen as difficult, if not impossible. James Corner, whose architectural firm was one of those chosen to design the High Line, told The New York Times in 2011, “It’s not just, ‘Build a cool park and they will come.’” Mr. Corner said there needs to be a framework to attach it to. […]

Man Creates a Teeming, Tiny City Out of Paper, One Building...