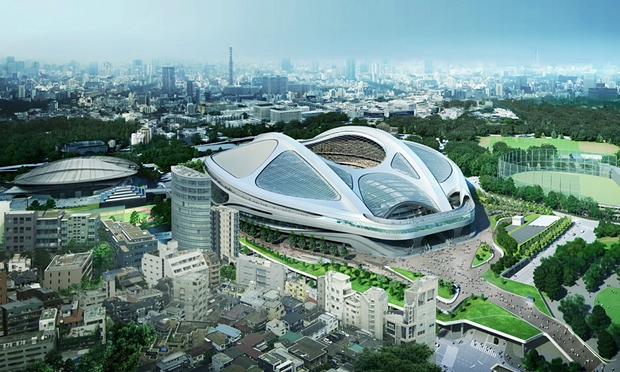 Citing rising costs that by some estimates had reached $2.5 billion, the Japanese government announced last July that it was scrapping Ms. Hadid’s plan for the 80,000-seat venue. In December, the commission was awarded to Kengo Kuma, a Japanese architect who had been a prominent critic of her design.

Ms. Hadid, who has staunchly defended her design against her critics in interviews and on her website, immediately protested the decision in a statement and suggested that nationalist motives lay behind the rejection of her plan.

Her studio has stepped up the attack in recent weeks, saying that Mr. Kuma’s design closely copied hers in significant ways, and in a Jan. 11 letter to the Japan Sport Council, which is overseeing the Games, raised the possibility of legal action against the council and Taisei Corporation, the contractor charged with building the stadium, for copyright infringement.

The letter added that the council had withheld payment for her work and was demanding that she forgo copyright claims. The council acknowledged last week that it had sent a letter asking that Ms. Hadid turn over her copyright-protected designs “freely without additional payment or restriction,” but did not explain its reason for doing so.

“It’s clear that the attempt to force us to hand over our copyright, something that’s never happened on any of our designs, was an acknowledgement that they need to use the work of ZHA and the original design team to proceed,” Ms. Hadid said last week in her first interview on the subject, referring to her studio, Zaha Hadid Architects.

“We wrote to the Olympics minister in August to remind him of ZHA’s intellectual property rights and did not receive a response,” she said, speaking by telephone from her studio in London, where on Tuesday evening she was to receive the Royal Gold Medal for lifetime achievement from the Institute of British Architects. Ms. Hadid, who was awarded the Pritzker Prize in 2004, is the first woman to receive the British honor.

Mr. Kuma has rejected her claims, saying at a news conference on Jan. 15 that the technical requirements for stadiums by necessity resulted in some similarities. “The two designs are different,” he said in an email on Friday. “We believe that ours does not violate any rights.” […]

Laurent Kronental: How I captured the soul of Paris’ housing giants

November 26, 2015
0
Laurent Kronental's breathtaking photographs unite the colossal, futuristic buildings of Paris housing estates and the senior citizens who live among them