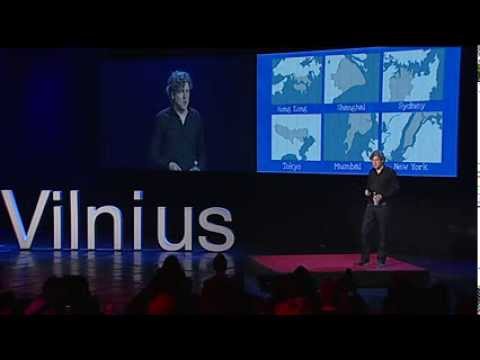 Koen Olthuis (1971) “the Floating Dutchman” studied Architecture and Industrial Design at the Delft University of Technology. In 2007 he was chosen as nr. 122 on the Time Magazine list of most influential people in the world due to the worldwide interest in water developments. The French magazine Terra Eco chooses him as one of the 100 green persons that will change the world in 2011.

In his vision today’s designers are an essential part of the climate change generation and should start to enhance their perspective on urban components to become dynamic instead of static. His solution called City Apps, are floating urban components that add a certain function to the existing static grid of a city. Using existing urban water as building ground offers space for new density, offering worldwide opportunities for cities to respond flexibly to climate change and urbanization.

The first city, in which this vision is being developed, is The Westland, near The Hague in Holland. This project incorporates both floating social housing, floating islands, and floating apartment buildings. In 2010, the government of the Maldives agreed to develop a floating city, floating islands, floating golf courses, floating hotels and a floating conference centre in a joint venture, as a solution to the problems caused by rising sea levels and also to encourage social and economic advancement.

www.waterstudio.nl
Aline Chahine
Aline is an international licensed architect currently practicing in Canada, she is the reason you are reading this right now, Aline founded the platform back in 2008 shaping the very foundation of Architecture Lab, her exemplary content curation process that defines the online magazine today.