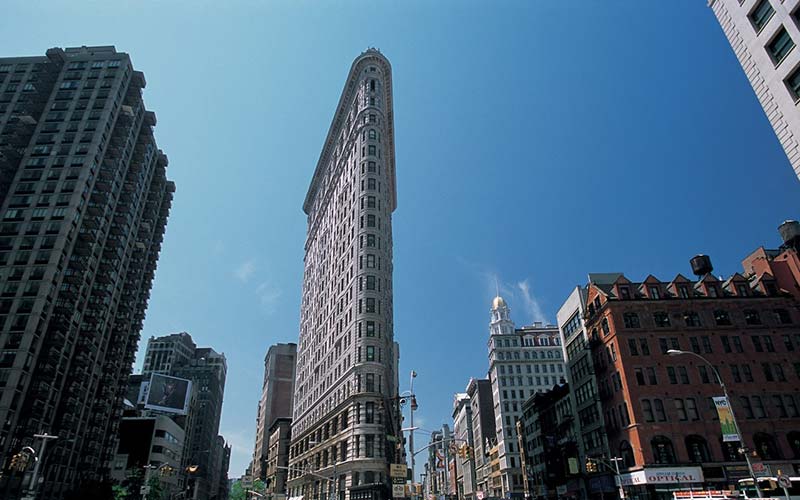 America’s true melting pot, New York City has drawn on the art and architectural traditions of diverse cultures to create a mélange of styles that is truly its own. Its iconic skyscrapers can take you on a historical journey through the most admired traditions in America as each new one was designed to make a bigger impression than the last, while exploring the city’s preserved interiors reveals that they’re every bit as remarkable as the buildings themselves.

Neoclassical
Some of the city’s oldest buildings and most elegant terraced residential streets are built in this style, whose natural sturdiness has served it well over the years. Large windows let in plenty of light while archways and the occasional vaulted interior break up the straight lines to great effect.

Gothic revival
An ecclesiastical trend that spread to residential buildings and a few public ones, the American Gothic revival reached its apogee in New York. Tall, narrow windows, ornamented stone, Gothic arches and even turrets and gargoyles mark out these striking constructions.

Art Deco
A bold, imaginative style that flourished in the hedonistic ‘twenties when there seemed to be no end to America’s economic good fortune, New York Art Deco is perhaps at its most spectacular in the Chrysler Building, but its vivid geometric shapes and mythic imagery can be found in many corners of the city.

Renaissance revival
Drawn from a convergence of 15th to 17th Century European traditions, this style is most vividly exemplified by the New York Public Library and Grand Central. With its curved structure, multiple balconies and balustrades and inventively shaped windows, it perfectly suits the city’s sometimes grandiose character.

Modernist
From the functionalist aesthetics of the Seagram building to the stacked circles of the Guggenheim Museum, modernism in New York takes diverse forms but always comes back to clean lines and smooth surfaces, usually rendered in concrete or glass.

Post-modernist
Extending the idea of modernism into a space where much more unusual shapes are created, post-modern architecture perfectly complements the eclectic character of the city, with its inventive designs helping to link together the several different construction styles sometimes found on the same streets.

Interiors
New York has never done anything by halves, and its interior design is bursting with character. New Yorkers really know how to use light and make inventive use of unusual spaces. In older buildings, you’ll find a lot of wrought iron and even brass fittings, with handsomely designed elevators and staircases. Bold colors have traditionally added vibrancy to interiors, from rich shades or crimson and brown to Georgian-inspired tourmaline green and gold. Other buildings embrace the Bohemian look for which the city became famous, embrace Warhol’s modernism or adapt the later aesthetics of NYC punk.

Design for a complicated city
Developing styles that reflect contemporary trends yet complement the diverse aesthetics of New York can be quite a challenge, so it’s good to be able to draw on the experience of developers like Louis Ceruzzi who really understand the architectural principles reflected in the city’s different buildings. His recent article on the notable buildings of the Lower East Side makes an intriguing read and illustrates the kind of historical knowledge that underlies his craft. It’s also well worth taking a look at Louis Ceruzzi’s blog.

New York is a city which is never short of imagination, a city bursting with creativity, but bringing it all together takes a very specific kind of skill. Whether you’re thinking about an office, a public building or your own home, taking your time to get the interior design right means you can bring out the best in architecture that deserves to be celebrated.

How COVID-19 Will Shape Architectural Education

Four Things You Must Know Before Hiring a Paving Contractor

September 16, 2011
0
The location of the apartment block is in the centre of Nova Gorica (population 32.000) – Nova Gorica is situated in the west of Slovenia, adjacent to the Slovene – Italian border.