“Supported by urban histories and incisively presented data, Christof Spieler sets the rules of engagement for effective transit and offers a roadmap for achieving it.”

Washington, DC (September 28, 2021)—What are the best transit cities in the US? The best Bus Rapid Transit lines? The most useless rail transit lines? The missed opportunities? And what can we learn from them?

Christof Spieler has spent over a decade advocating for transit as an urban planner, transit board member, blogger, community leader, and enthusiast. In the fun and accessible Trains, Buses, People: An Opinionated Atlas of US Transit (Publication date: October 23, 2021), he profiles the 47 metropolitan areas in the 50 states that have rail transit or BRT, ranks the best and worst systems, and draws out lessons for cities to build better transit. 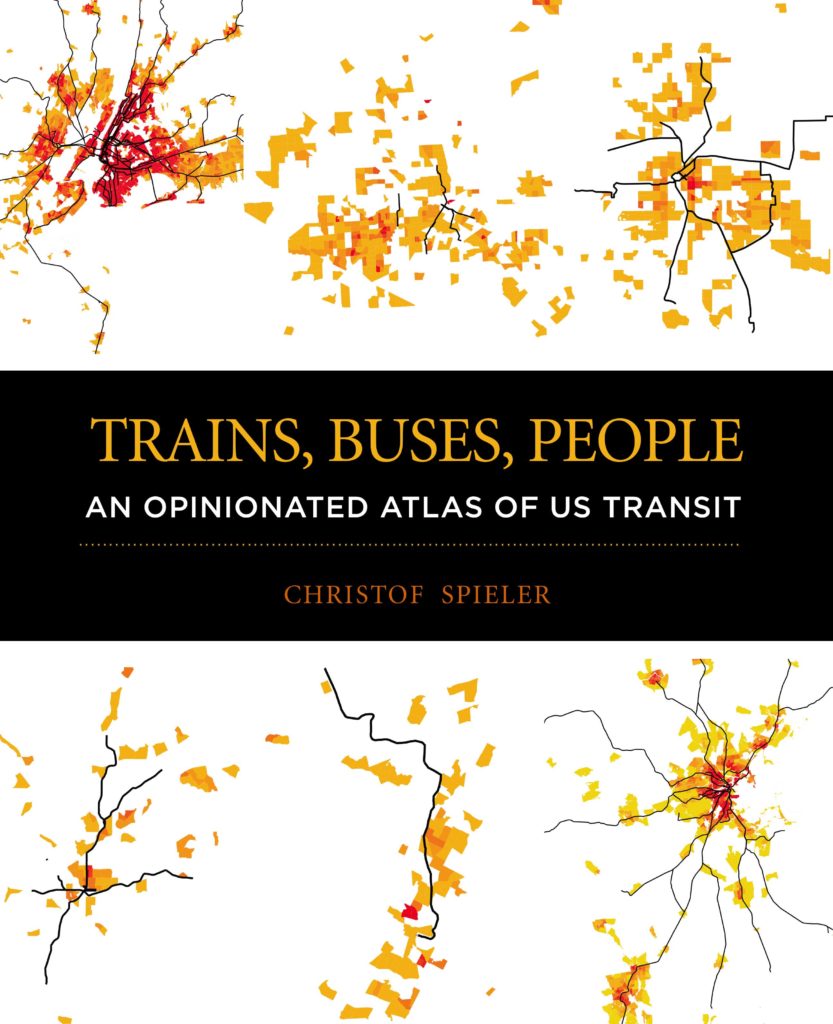 The key, he shows, is focusing on what makes good transit—quality of service (not the technology that delivers it); serving all kinds of transit riders; the role of buildings, streets, and sidewalks; and getting transit into the right places. Spieler explains these concepts before showing how the unique circumstances of every city have resulted in very different transit systems. Using data, photos, and maps, he profiles cities ranging from Albuquerque to DC, Honolulu to Little Rock, Los Angeles to Oklahoma City, and more. Each metropolitan area’s system and population are mapped to the same scale for easy comparison.

While the book is built on data, it also has a strong point of view. Spieler takes an honest look at what makes good and bad transit and is not afraid to look at what went wrong. For example, he shows that while Dallas has a 93-mile light rail system, the longest in the

country, it dramatically underperforms its peers in ridership. While New York City has the most extensive network of frequent subway and bus service in the country, its suburbs in both New York and New Jersey have much less transit service than their population density would justify. Spieler also shows that in some cities, like Minneapolis and Seattle, new rail lines integrate with buses to create a useful network while in others, like Cincinnati and New Orleans, they don’t.

The book also offers analysis of how geography, politics, history, and disagreements over goals complicate transit planning in the real world. In Dallas, for example, decision-makers focused on miles of infrastructure over frequency and service, which resulted in lower than desired per-capita transit ridership. In the end, though, Spieler is optimistic, identifying opportunities in every city to improve the quality of transit and make it more useful to millions of people.

Jarrett Walker, author of Human Transit said “[Spieler] is one of America’s great transit travelers, a careful observer of history, technology, geometry, and politics. This book is an atlas of beautiful detail about 47 U.S. cities, but it’s also a call to action, demanding clearer and more effective transit planning and advocacy.”

Trains, Buses, People shows that it is possible with the right tools to build good transit. It will help any citizen, professional, or policymaker understand what makes transit effective.

Christof Spieler, PE, LEED AP, is a Vice President and Director of Planning at Huitt-Zollars and a Lecturer in Architecture and Engineering at Rice University. He was a member of the board of directors of Houston METRO from 2010 to 2021, where he oversaw a complete redesign of the bus network that has resulted in Houston being one of the few US cities that are increasing transit ridership.

Founded in 1984, Island Press works to stimulate, shape, and communicate the information that is essential for solving environmental problems. Today, with more than 1,000 titles in print and some 30 new releases each year, it is the nation’s leading publisher of books on environmental issues. Island Press is driving change by moving ideas from the printed page to public discourse and practice. Island Press’s emphasis is, and will continue to be, on transforming objective information into understanding and action. For more information and further updates be sure to visit www.islandpress.org.

How to Tighten a Bike Chain

May 16, 2019
0
Why the Poor Die Earlier and How to Challenge Inequity Washington, DC (April 18, 2021)— In Twenty Years of Life, award-winning health journalist Suzanne Bohan...